I don’t know about you, but six weeks seems so much older than five weeks.
Or, maybe that’s just me.

We had a great time celebrating our first Thanksgiving last week with
grandma & grandpa and uncle Michael.

Here is a little recap.

The guys fried the turkey while the girls cooked in the kitchen.
It was an awesome day filled with family, food, and football.
Exactly how it should be. 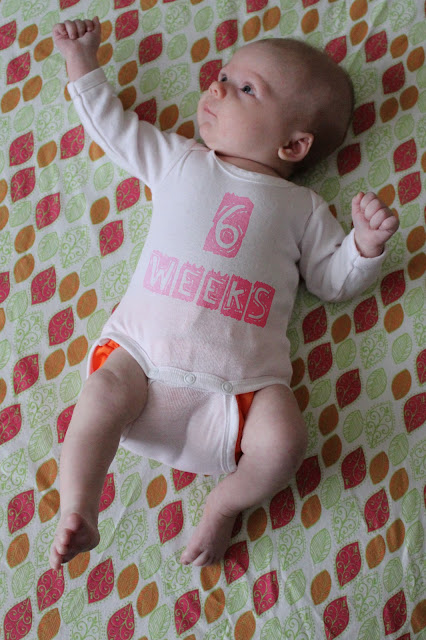 Kenley is changing everyday. She is becoming more vocal
and is starting to “talk” to us a little.
Every once in a while, we see a little smile, but she’s still pretty serious.
We’re starting to develop somewhat of a routine,
“somewhat” being the operative word there.
She eats 7 times in a 24 period, which has been consistent for a couple weeks now,
even though I didn’t realize it until I went back on my app and counted.
(Yes, there’s an app for that, I use the Medela iBreastfeed,
it’s the best, in my opinion).
The times she eats vary each day. It’s still more during the day, so I’ll take it!
We are trying to do one bottle each day and she takes it very well,
she even held it in her mouth with one fist the other night.

I am starting to track her sleeping pattern this week,
so we’ll see over the next couple of weeks how that’s going.
She loves napping in her swing during the day.

Back when I was around 16 weeks pregnant,
I would start to “retire” my normal clothes.
Each day, at some point during the day, I would think to myself,
“this is the last day for this shirt” or “this is the last day for these pants”.
I was pretty bummed about it until I realized how comfy maternity clothes were.
Now… I am starting to say the same things about Kenley’s outfits.
She is slowly moving her way out of her 0-3 months clothes, depending on the brand.
Sad.
I have started washing some of her 3-6 month clothes that look the smallest,
so we’ll be trying those very soon.

Greg and I were chatting about the last few months of my pregnancy
and I was shocked about how much we are already starting to forget.
I look at pictures and cannot believe I was ever that big (!!). It’s becoming a blur.
Greg then made a comment on how the first few weeks home with her were a blur,
so I’m really going to try to provide more detailed posts each week.
Whether it’s fun stuff she’s doing or just random boring stuff,
we want to be able to look back and read about our time as two, tired, new parents
of an ever-changing, cute little girl.

Hope you are recovering from your holiday hangover.

So thankful for this little nugget!

Have a wonderful holiday!

We have so much to be thankful this season!

She has developed a serious mullet,
or as her Uncle Michael would call it, a “skull-it”.
Nice.

Kenley got to meet Uncle Michael for the first time this morning,
as he got into Orlando late last night.

We think she is becoming more aware of her arms
and that she can actually control them. She has been flailing them about
a lot the past few days. Or this could just be a coincidence.

What do we know? 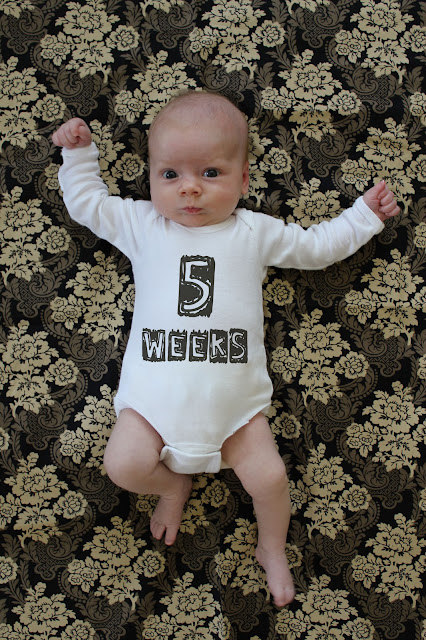 Look at those lips!

Happy one month birthday to our sweet girl!

Here is a rundown on our new life.

Eating
Every day is different. Some days she will go 3-4 hours between feedings,
others it’s every two on the dot.
She now eats a lot more during the day and has been going about four hours at night.
I’ll take a lot of day feedings over a lot of night feedings any day, obviously.
I was very concerned about her eating regiment the first two weeks,
but once we found out she had gained a whole pound at her two week appointment,
I haven’t really worried too much about it since. I have my moments though.
She took a bottle for the first time this week,
and she took it like a champ!

Sleeping
Who would have thought that we would be SO happy with a four hour stretch of sleep?
That is our life now.
We are so happy when she goes 4 hours between feedings at night,
I think one night she even went close to five!
We basically live day to day in a series of naps.
She is starting to have more awake time during the day,
but again, we don’t really have a set schedule yet for sleeping.
We basically let her sleep when she is tired,
which sometimes turns into her not actually going to bed until 11pm or midnight,
or being up for a couple hours during the middle of the night,
but overall, she is a great sleeper. She gets that from her momma!

Pooping
Welcome to the world of dirty diapers and lots of laundry.
We started cloth diapers when she was three weeks and haven’t looked back.
They are going very well and we really love them.
I really can’t believe how easy they are and she seems to like them too,
I don’t know how she couldn’t, they are SO soft on her little bum.

Playtime
Majority of the time, during her awake hours, she is pretty content.
She obviously has her moments, but we really can’t complain.
We have been having supervised tummy time
and she is really doing a good job of lifting her head.
She loves: staring at the ceiling & fan and relaxing in her swing.

Outings
We have been very fortunate to resume our pre-baby life as much as possible,
and as much as we want to right now.
This past weekend, I was able to go to the UCF basketball game
and the Dwight Howard Celebrity Basketball game both at the UCF Arena.
Greg worked the events, so it was nice for me to get out and socialize with other adults.
I was able to put her in the Moby wrap, which allowed me to have two free hands,
and she slept through both games…but I do think she is already a basketball fan.
We also made it to Baby Bunch on Friday where we met a few new friends!

We can’t believe we already have a one month old!! 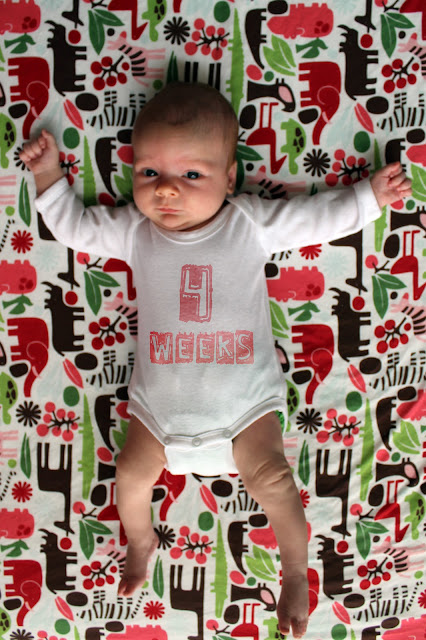 She’s definitely starting to fill out.
Greg came home from work today and kept saying how different she looked.

I think it was because she had on a summer outfit that showed some skin
because it was abnormally hot, muggy, and humid today.
High 80’s. Ugh.

I know that’s not something we should be complaining about,
but Thanksgiving is next week and I’d like to break out my sweaters and boots!
k, thanks.

We have had a lot of questions about our birth announcements,
so I wanted to give a shout out to our friend Karen who designed them!

Her company is KLP Designs and she does an amazing job!

I could not imagine a more perfect announcement for Kenley.

Karen does so much more than just baby announcements.
Check her out!

She and I have been hanging out together this week,
our overnight visitors are gone and Greg is back at work.

It has been going well and we are learning as we go.
I need to utilize the Moby wrap more so I can do things around the house
aka play on the computer with two free hands,
instead of holding her while she sleeps, which doesn’t allow me to get much done.

Our daily routine changes every day as we learn to cater
to the needs of an ever-changing newborn. 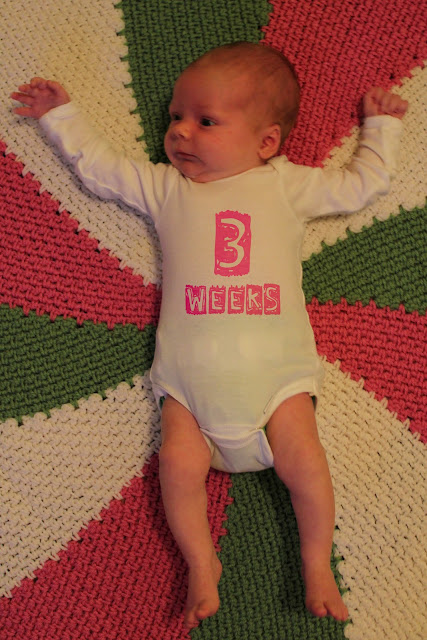 Today was our first full day of the cloth diapers!
They still are a little big, but we are running low on disposables,
and I really don’t want to buy any more, so we are seeing how it goes!

While my mom was here, we decided that we would
pretend we were professional photographers and take photos of Kenley.
It was pretty humorous and if you would have seen us,
you would quickly realize that we are not even close to professionals.

However, we did get a few cute shots. Take a look!

The adorable “K” onesie is compliments of my cousin Misha!
Check out her tutorial here!

I’m a few days behind, but alas, here is a 2 week update!

We had another great doctor’s appointment this week,
actually we had two! One for her and one for me!

She now weighs a whopping 8 pounds 12 ounces!
Almost a full pound over her birth weight!
Ideally, infants are back AT their birth weight at 2 weeks.
The nurse said she’s definitely not starving… I’d say!

I already cannot believe how much she’s changed in just two weeks! 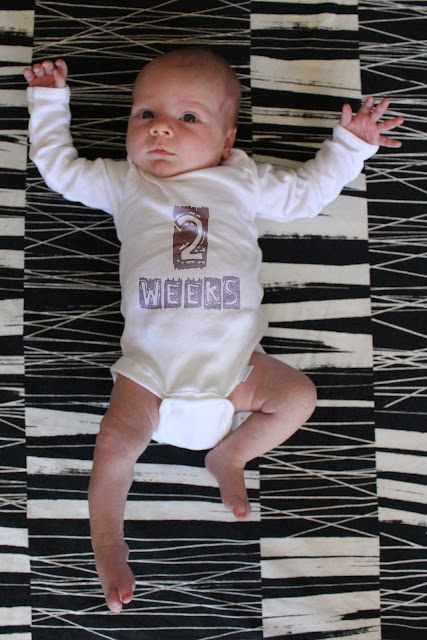 We will also add the photos to this album so we can see her grow week by week!

Hope everyone has a great weekend!