This quite possibly was the fastest year of my life.
I cannot believe today is the last day of 2011.
Here is a look back.

We started 2011 with the goal of taking a photo a day for the entire year, which is what the blog consisted of in the beginning.
We also headed out to Frisco, Colorado to celebrate the twins’ 6th birthday and play in the snow!

Our dear friend Stan turned 40! We partied.
The Packers beat the Steelers in Super Bowl XLV.
We saw Wicked at the Bob Carr Performing Arts Centre in Orlando.
On the last day of the month I peed on a stick and our lives changed forever!

We spent the entire month of March hiding our pregnancy from friends, which means I was drinking “vodka” tonic and “vodka” & Sprite.
St. Patty’s Day was celebrated at an Irish bar that is now closed. Sad.
Of course, we watched countless hours of March Madness basketball and Stetson announced they are bringing football back!

Headed to Miami for a fun weekend of baseball & beach!
We finally shared the news that we were expecting!
I headed to New Orleans for the first time for a work conference.

Maggi & Greg came to visit!
We saw Cirque du Soleil at Downtown Disney and went to the ICE Bar on I-Drive!
We found out we were having a girl!!
It’s crazy to think back to when we found out and the fact that the “girl” is now Kenley!

We celebrated our third wedding anniversary and the 4th of July in Anna Maria Island with my family.
We made major headway on the nursery and other baby-related tasks.
Alicia came to visit!

It was a pretty uneventful month. We finished up the nursery and did some other home improvement chores, including our office makeover.
The fall semester started back up and we both were pretty busy at work as I made my way into my third trimester.

Quite the opposite of August, September was insane.
We headed to Indiana for Celeste & Curt’s wedding over Labor Day weekend and threw in a baby shower while we were there.
Greg headed to New York the following weekend for Vin & Lauren’s wedding and I stayed back.
We had our prenatal education courses at the hospital to get prepared for the babe.
I had another baby shower here in Orlando while Greg headed to North Carolina for Mango & Karen’s wedding,
the same weekend I had to miss Meghann & Sean’s wedding in Indy because I couldn’t fly.

By far the best month of the year for several reasons.
We got to see the Colts play in Tampa against the Bucs on Monday Night Football.
Greg and I both celebrated our birthdays.
We did some other home improvement projects while I was seriously nesting.
Kenley Dee was born on October 19th at 6:25pm.

We spent the month adjusting to a newborn and celebrated our first Thanksgiving!!

It has been a busy month. I did some more home improvement projects.
We met so many new people, had our first road trip, and our first flight!
We also celebrated our first Christmas!

Needless to say, it’s been an amazing year.
Hope you all have a safe and happy new year!
See you in 2012!

The day after Christmas we were able to meet the other side of my fam!
Lower Christmas!

Not all of my cousins were there, unfortunately, but we were able to meet most of them!

There were other babies there that we got to meet too!

Jack just turned one!! He is a little 1 lb. 10 oz. miracle baby!
We were able to visit Jack in the NICU last Christmas when we were home just days after he was born.
He has come a long way!
You can read about his journey here and follow the Pena family here!

Landon is just a couple months older than Kenley!
We were so excited to see David & Jodi and fam who were in from North Carolina!

We got to meet Frankie too, who is 9 months old!
Look at that hair!!

Here are all the great grandchildren who were there!
Yes, we got them all in one place at the same time!
A true Christmas miracle.

The mamas and the babies!

Marge & I
Here is a good shot of the hair on the back of Kenley’s head!

We had a great time visiting with the fam and having everyone meet Kenley!

Kenley’s first Christmas was awesome!
Granted, she slept majority of the day, but it was still fun.

We opened presents with our immediate family on Christmas Eve
after coming home from the annual Garner Christmas Eve bash.

On Christmas Day we would normally head to Indianapolis to my aunt’s house,
but we played the “baby card” this year and my parents hosted Christmas at their house!

We opened presents, had dinner, and played games,
which is always a treat.

Four generations over 71 years!
We really have five generations living,
but my Great Grandma, who is 92, couldn’t make it for Christmas,
so Kenley has a Great-Great Grandma!

The girls on the Faris side.

Great grandpa and Great grandma with Kenley, who looks thrilled.

We had a great Christmas day with the family!

We are home, enjoying the Florida winter.
By “winter”, I mean that it was sunny and in the high 60s today.
Amazing.

We had a great time in Indiana and a great first Christmas with Kenley,
who is 10 weeks old today!!
Insane.

She has been changing every day,
and yes, I know I say that every week, but it’s true!

She is certainly developing a little personality
and smiling more and more every day!

She is regularly talking and cooing
and loves the morning time!
She is so happy.
Smiling and laughing until it’s time for a morning nap. 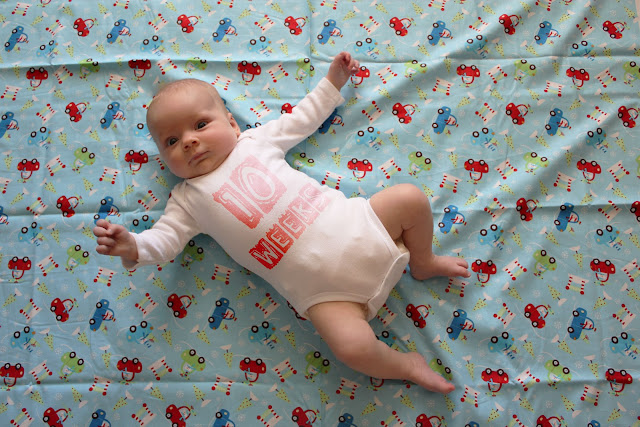 Stay tuned for updates about our first Christmas
and traveling with a two month old!

Wishing you a very Merry Christmas
from the Gilbertson family!

We are having a good time in Indiana and
really looking forward to celebrating our first Christmas with her! 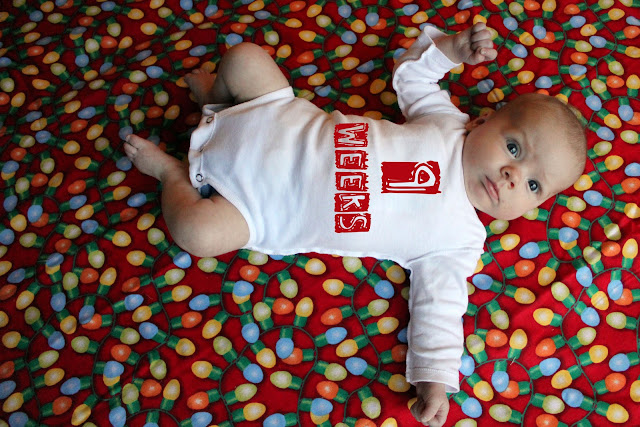 Hope you all are enjoying the holiday festivities so far!

We are still hoping for a white Christmas!!

Our alarm went off at 5:30 this morning
which gave us just enough time to get ourselves ready,
wake up, change, and feed Kenley before getting out the door,
in order to get to the airport by 7:15am… give or take a few minutes.

We went over our game plan on the way to the airport,
Greg would drop us off and hopefully we would be able to curb side check our bags.
Wrong.
Of course, the lines were super long… yes, on a Monday morning,
so I took Kenley, the diaper bag, and the [49 pound] suitcase
and made my way inside to check the bag.
Greg went to park the car and took the two smaller suitcases and camera bag.
So much for packing light.

Lines inside weren’t too bad, thankfully.
We headed to security. I had Kenley in the Ergo baby carrier, which was awesome.
After spitting up all down my shirt, she was sound asleep.
Fun fact: I didn’t even have to take her out of it to go through security.
Thank you TSA.
We arrived at our gate with plenty of time to spare
and walked around a little bit before boarding the flight.

We were in the “A” group on Southwest, but still ended up towards the back of the plane.
I was super nervous about taking off.
I had heard/read that babies should suck on something or feed during take off/landing
to help with the pressure in their ears.
Kenley was sleeping, so we let her be and just prayed she’d be ok.
I have no idea how, but she was fine. My ears were even killing me.
I did have to take her out of the carrier while on the flight.
Not sure why, but I had heard that before, so I was expecting it.

She slept on and off most of the flight.
She seemed uncomfortable just a few times, but didn’t make too much noise.

Once again Southwest was awesome.
We love flying with them.
However, I did not know to bring anything that stated her birth date,
but the nice lady at the counter explained that they always need to ask,
even though she is obviously a baby and no where near the age of two.
We will have something for our return flight so there are no issues.
But new moms, take note… just make a copy of their birth certificate,
or a copy of their shot records, which also states the birth date.

We arrived in Indiana safe and sound after a great flight.
The rest of the day didn’t go as well, but hopefully we’ll adjust to being here
and have a great week visiting and meeting friends and family.

Stay tuned for lots and lots pictures to come!

She also had her first round of vaccinations.
She pretty much wore herself out before she was ever administered the shots
by screaming at the top of her lungs for a good 30 minutes…
in the doctor’s office.
Once she had a few more screams because of the shots,
she slept soundly for an hour or so afterwards.
Not going to lie, I shed a few tears too.
Partly due to seeing her so upset and partly due to pure exhaustion from the morning we had.

At two months, she is starting to smile more and more.
She loves looking at the fan and the large black & white pictures behind the couch.
She sleeps in her swing on a regular basis during the day
and sleeps soundly in her crib at night.
She is plays on her play mat and loves looking at herself in mirror.
She really enjoys the bath, which makes it easy on us.

We love seeing her grow each and every day
and are looking forward to celebrate our first Christmas this week!

My cousin Misha started the series a pinterest christmas,
so I wanted to join the fun!

We have these really awesome neighbors who graciously
sold us their baby swing for 20 buck-a-roos at their yard sale
four days before Kenley was born.
If it weren’t for them, we would never have known how awesome baby swings are.
Seriously, if you’re going to have a baby, get a swing.

Well, I have been really stressing about what I could give them for Christmas.
Nothing too big, but just something nice. I mean, who doesn’t like a nice,
little gift that shows someone is thinking about you?

I found this pin today and immediately got to work.
What a perfect gift for a family with kiddos!

This really could not be any easier,
the hardest part was actually getting out of the house to get the supplies.

I wanted to make sure the amount of toppings were relatively the same in each bag.

Then I tied them up!

Once I was done, I filled up the basket and put the card in there!

Now they can enjoy a family ‘build your own ice cream sundae’ night on us!
They will just need to supply the ice cream. 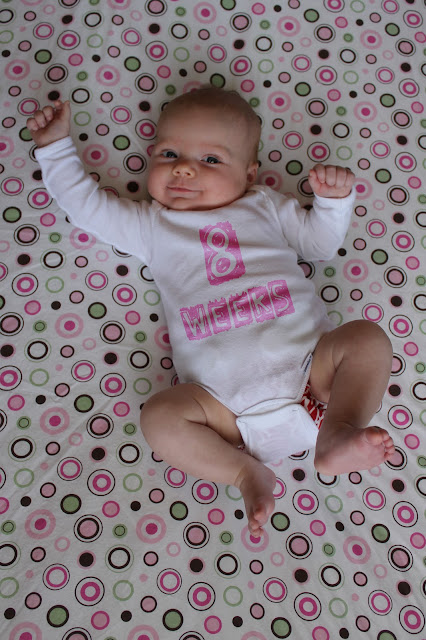