The first week of the year is a big week for everyone,
and that is no different for our family.
I started back to work yesterday (more on that later)
and Kenley has survived two days of daycare.

We had developed a nice routine while I was home.
Kenley had been sleeping through the night for the last three weeks,
even when we were in Indiana for a week, which was so nice and surprising.

Of course, the night before I started back to work,
she was up at 3:30am ready to eat and be changed, which was fine.
Then it happened again last night, at the same time.
I guess she’s on a new schedule now.

As I was feeding Kenley in the wee hours of the morning,
I caught up on some blogs and read this post, which brought me to tears.
It really puts things into perspective.
Yes, getting 7-8 hours of uninterrupted sleep was amazing,
but it’s really alarming what we take for granted.
I am thankful that Kenley can eat on her own, even if it is at 3:30am.
I’ll just put a little more coffee in my cup on those mornings.

Also, while we were up this morning, Greg mentioned that Kenley
“is only 10 weeks old”…
I reminded him that she’s 11 today!
Time is seriously flying.
Which makes me thankful that I am doing these weekly posts,
even though they are tedious at times.
I’m 100% sure will get more tedious as the weeks go on,
but I know it’s going to be fun to look back to see how she’s changed.
Side note: you wouldn’t believe some of the random things
Greg and I talk about in the middle of the night.
One night it was oyster crackers. Yes, oyster crackers.

Kenley is still smiling a lot and even laughing sometimes.
She loves her play mat and her new octopus,
as well as Mr. Duck and Mr. Frog who hang on her car seat.
She’ll just stare and smile at them, it’s seriously hilarious.
We’ve been battling  some gas and tummy troubles lately,
which does not make her a happy camper.
She has also become quite the drooler and slobber-er
and likes to blow tiny spit bubbles, whether she means to or not! 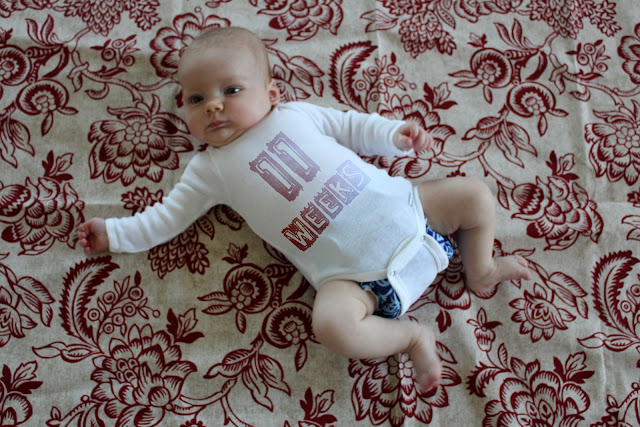 One thought on “Eleven Weeks!”