I haven’t taken many videos lately so I thought I better get on that.
I mentioned that Kenley loves her some puffs, so I captured some evidence.
In the next couple of weeks we’re going to start to introduce some finger foods.

At times, I find myself just sitting and watching her play.
Toys are strung across the floor and she just goes from one to the other, often getting distracted by something else, then goes back.
She loves pulling herself up on her table and playing, then plopping back down.
She’s really good at pulling herself up and sometimes the table slides across the floor (silly hardwood) and she’ll even take a step or two  in order to stay up.
I don’t think she realizes she’s doing it, but it’s still fun, nonetheless.
She grabbed something off the couch the other day with both hands and ended up standing by herself for a few seconds before she plopped back down.
It didn’t even phase her, but I was excited.

Our weekly photos are now a two person job and don’t even think about keeping the fabric straight.
This was only one of a few smiling pictures out of many screaming ones.
You’d think we were torturing the poor child.
Nope, she just doesn’t want to be on her back. Same goes for changing clothes and diapers.
Full out screaming at times.
Two words: drama queen. 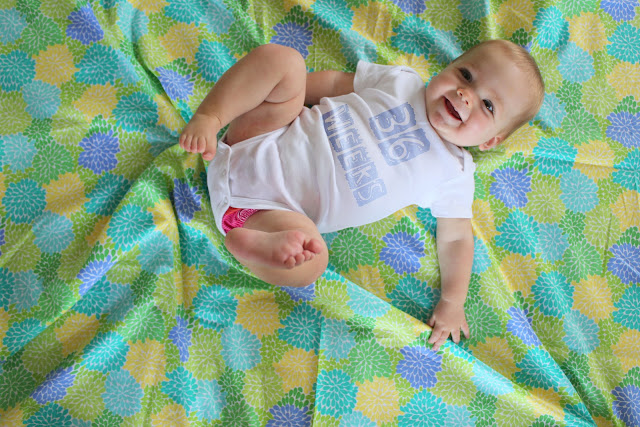