We are back in action. My laptop returned to my possession today,
with a new screen and a bonus (under warranty) new keyboard!
I feel like a brand new person.

Therefore, I am combining our nine months & 39 week posts into one.
Can you believe Kenley has been on the outside just as long as she was on the inside?
Crazy.

Our photo shoots have turned into me following Kenley around snapping pictures.
This girl is in a constant state of motion. There is no staying in one place,
let alone sitting still. Forget about it.
She moved on the inside all the time and she does the same thing on the outside.
Long gone are the days of cuddling, which I truly miss, and fresh are the days of exploring.

New this week is clapping! We joked on Sunday that Jack needed to teach Kenley how to clap.
Jack is a clapping machine and he must have planted the seed because not two days later,
Kenley started clapping, following our lead. It’s so fun to watch her learn new things.

Kenley is a big fan of the sliding glass door.
Majority of the time, she crawls right into it, but it doesn’t phase her at all.
She’s up and down, standing against the door, banging on it with her hands.
She likes to hide behind the curtains, pull on them, try to stand up with them.

We are back to our normal routine since returning from vacation.
Kenley had to relearn how to fall asleep on her own after a week of sleeping in a pack-n-play
and occasionally getting shh-ed to sleep. It took about a week, but she does a good job.
We are still without tootie and haven’t looked back.
In the mornings, she’ll typically wake and play for a little bit in her crib before crying out for us.
If it’s any before 5:15am, we usually let her play as long as possible.
She’s still pretty inconsistent with her wake up and morning feeding times.
It can be as early as 5am and as late as 5:45am, but she does go back to sleep until about 7am.

We are continuing with the solids and I think she is starting to wean a little bit on her own.
Her milk intake is dropping slightly and she is eating three solid meals a day.
I think we’re still being pretty conservative with her solids, so I’m hoping to start expanding
and trying new foods more regularly, at least something new every three days.
She’s eating some finger foods and does a good job at it, but again, I think we can start introducing more.

She now has four teeth, two on top and two on bottom.
She still puts everything in her mouth and when she gets your fingers in there, it hurts!
The drooling continues, some days are worse than others.
She has discovered her tongue and the fact that she can make noises with it.
If you make noise with your tongue, she’s in heaven. She loves grabbing at your mouth and teeth.

She is still letting go while standing and I was able to capture it quickly before she plopped down.
The length of time that she’s standing is increasing, but that’s about as far as we’ve gotten. 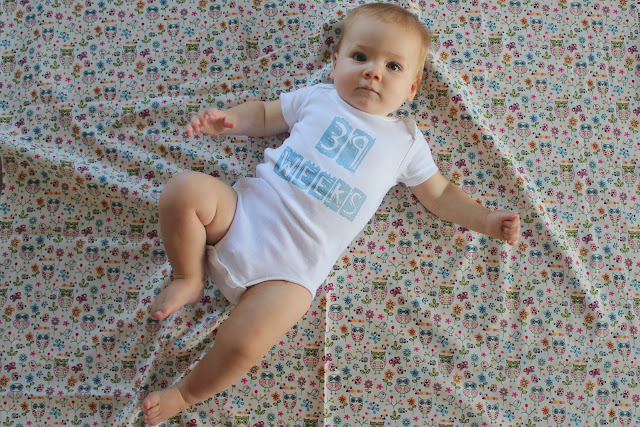 Greg and Kenley are off to the doctor tomorrow, so I will update her most recent stats following her appointment.
I am anxious to see where she stands since we haven’t been to the doc since our six month appointment.
She is in mostly 9-12 month clothing, but still can fit into some lingering 6-12 mo. outfits.
We are still obsessed with our cloth diapers and the entire process. While it has definitely changed since
we started on solid foods, I would say it’s just different, not necessarily worse.

Happy 9 month birthday Kenley Dee! You are becoming more fun each and every day!