Our photo ops are becoming more interesting. This girl is all over the place and hates headbands.
It’s quite hysterical, between Greg and I singing, yelling, dancing, and making weird noises,
to Kenley crawling all over the place and trying to find the headband on her head
(picture dog chasing his tail) before she finally yanks it off.
However, we got a few keepers.

Kenley is becoming such a toddler. I can’t even consider her a baby anymore.
Long gone are the days of cuddling, bottles, and pacifiers.
With that comes a bit of ease. We usually know her wants and needs, so we’ll gladly say
good riddance to the days of a crying baby and clueless parents.
By no means do we have it all down. We are still battling nap time on the weekends,
but I think we’re not doing too bad at this point.

Kenley is also developing quite a little personality.

One of her teachers even described her as “bossy” at times.
We are definitely learning how to share and have nice hands.
I have a feeling she’s going to give us a run for our money.

She is a great little eater, but we are struggling to keep up.
We really love making her food and feeding her fresh fruits and veggies,
but since we’re moving out of the puree stage, it’s getting hard to add variety.
I have been scouring Weelicious and other toddler recipe sites, but we are open to suggestions.
She is doing well with her sippy cup and has recently started to use her straw cup too.

Her new class and new teachers are wonderful!
She is one of the oldest in the class, so I think this may have something to do with her bossy tendencies.
Maybe she’s just being a leader? …maybe?
They seem to have a great schedule for them during the day which translates to a good weekly schedule for us too,
even in the mornings! We are getting better, that’s for sure.
Since she has started in the new class, she has been signing. We had not done it much at home, but are getting better.
The most frequent signs are “more” and “all done”, with the occasional “please” in there.
She is also becoming more verbal. She does a good job of repeating words and sounds that we do.

One month ago Kenley took her first few steps and she is getting better and better.
She is getting more brave and is starting to take it upon herself to walk from one thing to the next.
Of course, she does it on her own time (i.e. not for the camera), which is perfectly fine.

We have hit a new level of teething this week. We are guessing it’s time for molars.
I cannot begin to explain the amount of drool that is coming out of this child’s mouth.
Not to mention a fever, which has kept her home from school the last two days,
and just an overall whiny, puny, not good feeling.
The doctor checked her out and she’s not sick, so that’s a plus,
but she has cuddled and fallen asleep on each of us, which is a definite sign that she’s not feeling well.
It’s heartbreaking. Sleepless nights are back in the Gilbertson household.
Let’s hope they don’t last long! 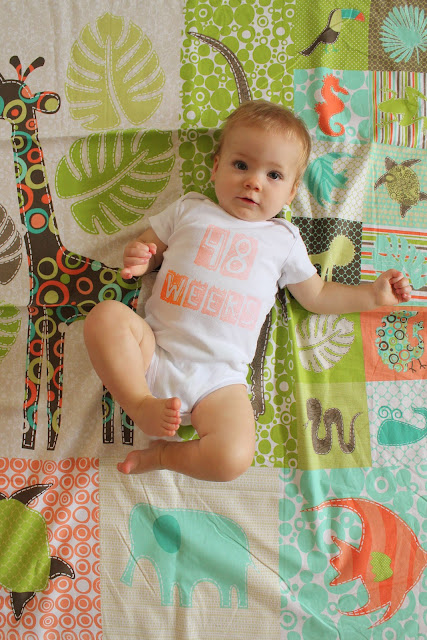 There you have it! Eleven months!
One month until the big O-N-E!