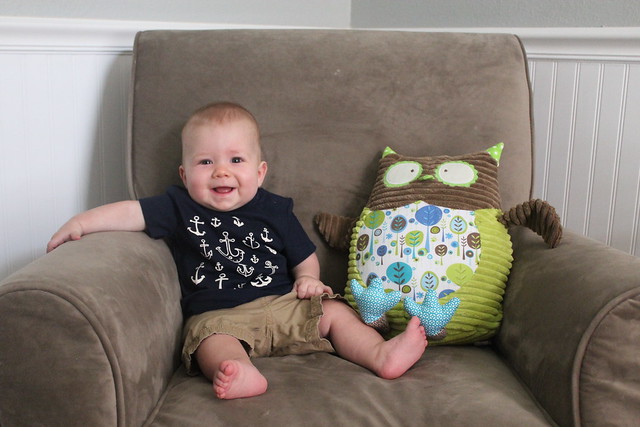 This boy loves his food. We’re introducing a new food every 3-4 days and he’s started eating puffs. Kenley is also back to eating puffs and she’s obsessed with them. She asks to share with Crosby, which really means she’s going to take them off his tray. He still needs to work on actually getting the puffs in his mouth.
His new foods include [organic]:
avocado
plums
peaches
zucchini
yellow squash
[jarred] carrots
He will really only eat the peas if they are mixed with apples. We also mix the zucchini and yellow squash together so it makes a larger batch.

Unfortunately, Crosby has been spitting up a lot since his six month mark, which is a bummer for all! We’re hoping to see if we can figure out why this week. If not, we’ll just have to deal with it and hope it will subside soon. 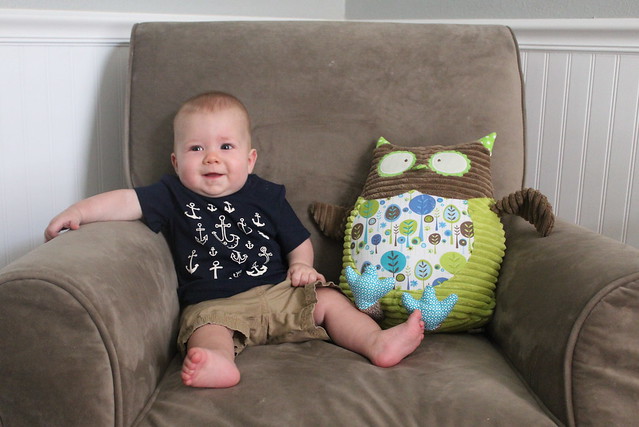 I really should just stop talking about his sleep habits because they change every single  day. This has been a rough month, but we have had a little bit of an upswing here lately. We’ll see if it continues. We decided to cut down on the pacifier a little bit during the night and Crosby has decided to cut down on his naps during the day. He will nap for about 30-45 minutes during the day (sometimes an hour, which is awesome!), so by the time 7pm rolls around, he is wiped out. He usually will sleep in the car on the way to school and on the way home, then he’ll have two short naps during the day. The ten minute nap is still THE WORST. It’s like a fake nap where he thinks he now has all the energy when he really should be sleeping like another hour. The good news is that he does sleep well at night for the most part which is a good thing because he needs to make up his sleep sometime! 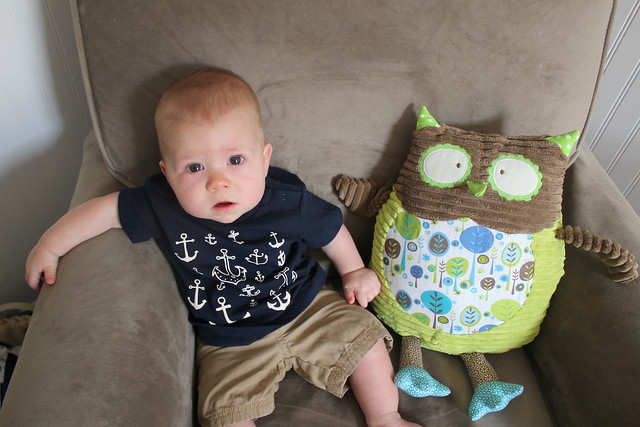 Little man is officially on the move. He’s got the army crawl down and can get where he wants to go. He goes up on his hands and knees a lot, but just doesn’t realize that it may be more efficient for him to get around that way. He also is dying to pull himself up on things, so I’m sure it won’t be too long before he figures that out. If you prop him up against something, he will stand there hanging on for as long as he can. He is also becoming quite the expert in downward dog. He can get from a sitting position to down to the floor, but he hasn’t gotten back up to sitting yet.

He loves to play with anything he’s not supposed to. He is obsessed with our iPhones. Why? I have no idea. Now that he’s on the move, he will go for whatever Kenley is playig with, and I’m sure you can imagine how she feels about that. We have already had the talk about putting things away that she doesn’t want him to get… but she doesn’t really get that yet either. I have completely forgotten how it is to have a baby on the move. We have really been utilizing the play table that sits on the floor (also seen in Kenley’s seven month update) and chew toys. 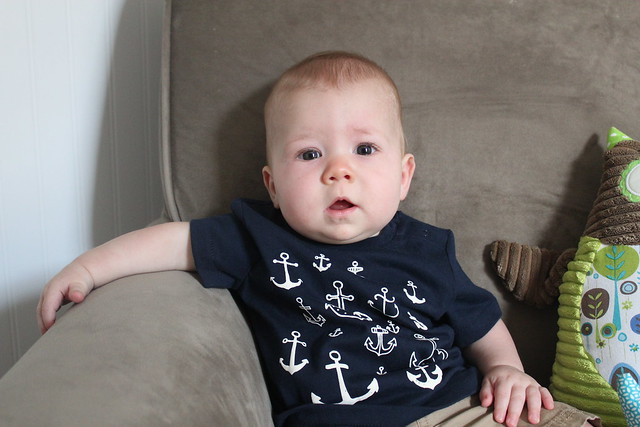 Weight – About 17.5 pounds by the bathroom scale
Hair – Getting thicker!
Teeth – Zero and no signs of any coming in either
Eyes – Brown eyed baby boy
Clothes – A mix of 3-6, 6-9, and 6-12 months depending on the brand and size 2 shoes, almost into size 3.
Diapers – Cloth diapers day and night.
He started leaking out of the disposables at night, so we went back to cloth.
Likes – Being tickled, bath time or just being naked, the Ergo, chewing on anything, moving around, being held
Dislikes – Taking naps, being overtired (which does not go well with not taking naps), being hungry 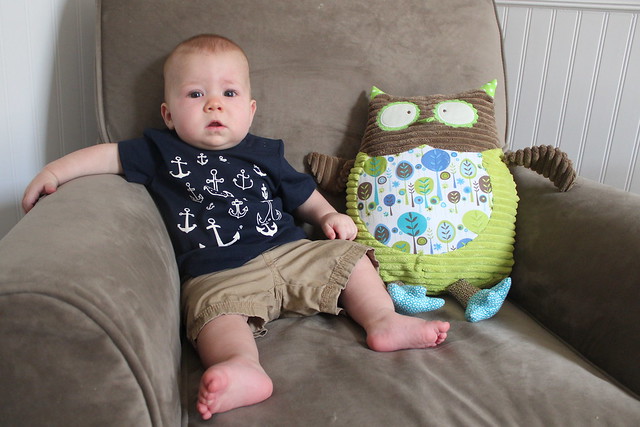