I finally feel like we are getting into a good routine and schedule with Crosby now. It really happened when the kids started “summer camp” at school. Really, the days are no different for us, but there is a significant difference at school in the summer versus the fall or spring semesters. There are less kids and it’s more laid back, in my opinion. We are definitely in a summer groove now and feeling good.

This month Crosby had his first ear infection, which led to us chatting with our doctor about him spitting up so much. After trying a few things, we ended up dropping a [milk] feeding and adding a solid meal. The spitting up has gotten better, thankfully! They really weren’t concerned with it, but it makes me feel better knowing that it’s subsided.

A typical day for Crosby is waking up around 5:30am, eating and going back to bed. He’ll have three solid meals (breakfast, lunch, and dinner) and two daytime feedings. He has a bottle at school and I feed him on the weekends. He has been pretty good about napping twice a day, one of which is usually an hour or longer. He has a bath every night, then I’ll feed him around 7pm before laying him in his crib. He goes down without his paci and usually sleeps until 4-5:30am. If it’s before 5:30am, we’ll give him his paci so he will go back to sleep. Some days he will sleep later than 5:30am, which we would like more of, but this week it’s been pretty consistent at that time. 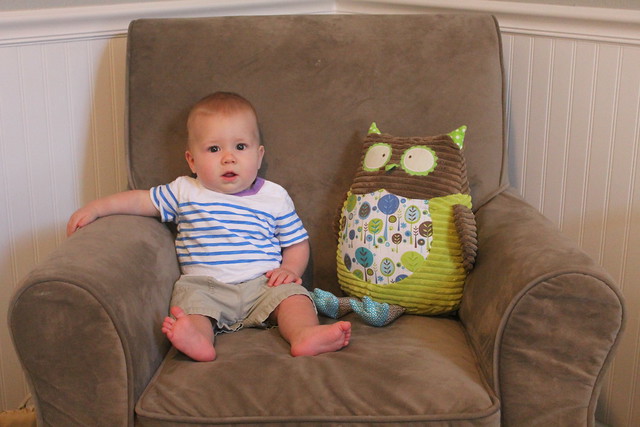 Crosby is definitely crawling, but I wouldn’t say he’s crawling all over the place. He would much rather pull himself up than crawl (apparently, his sister was the same way). He will crawl to the next place he thinks he can pull up on (and he will do it). He loves pulling up on chairs, the ottoman, the play kitchen, the couch, his crib, dressers, the wall, really anything. We’ve even caught him cruise from one item to another, so I am sure it won’t be long before he’s cruising all over the place.

Little man is babbling a lot, saying both da da da and ma ma ma. Of course he said ma ma ma when I wasn’t there, but Greg did get it on video. I love that you can see the wheels turning in his head as he tries to imitate Greg’s lips. He’s not yet calling either of us by those names, but I’ll take whatever I can get!

He has a very laid back personality. He smiles all the time, but really getting him laughing takes a little bit. Apparently, he thinks it’s hilarious when Greg is throwing a ball at Kenley. Crosby got hit a few times, but he just laughed it off.

Since he dropped a feeding this month, I decided it was time for me to drop the 2am pumping session. Our freezer is packed to the brim with frozen breast milk and since he’s eating six ounces less a day, I figured it was safe to stop. Needless to say, it’s been nice sleeping longer than 3-4 hour increments. 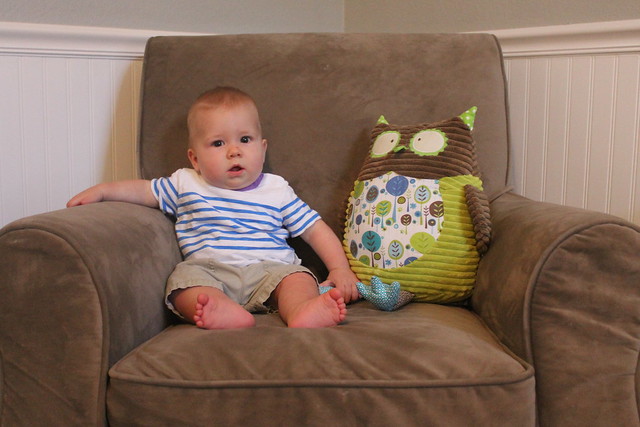 Weight – I would guess around 19 pounds
Hair – It’s starting to get long on top, almost time for a mohawk!
Teeth – One tooth! I think another one is close to popping through too.
Eyes – Brown brown brown.
Clothes – I just retired his 3-6 months clothes. He’s in all 6-12 months now.
Diapers – Cloth by day and we’re back to disposables at night, size 3.
Likes – Pulling up & standing, bath time, Mum Mums, food, pulling hair, chewing on anything, Kenley, stroller rides, the Ergo
Dislikes – The time between his bedtime feeding and actually falling asleep, diaper changes

I shared a glimpse into our crazy life over on Orlando Moms Blog, if you want to check it out!

One thought on “Eight Months”