This is Miss K’s last monthly update before the big 3!
She had her first day of the older toddler class yesterday and had a great day.

It’s crazy how much she has changed since the first day of school last year. 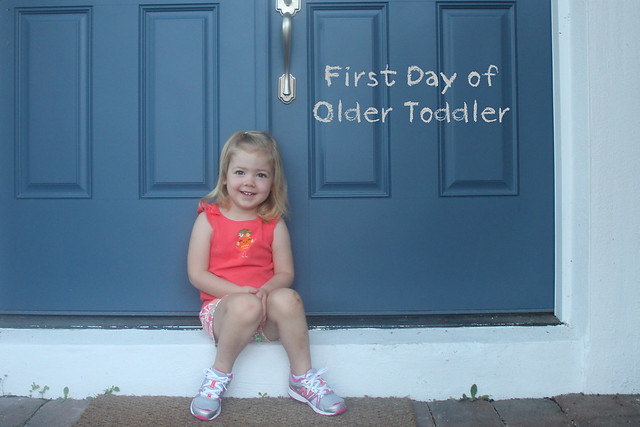 Since we always ask Kenley what she did at school that day,
she now asks us “mommy, what you do at work today?”.
Also, her answer to our question is now “nothing”. It’s like we have a teenager on our hands. As a result she has to say three things that she did that day or that happened at school. Most of the time she just gives us the names of her friends.

She has seen me do yoga a few times so her favorite thing to do is downward dog.
She sometimes call is “yogabba gabba” which is hilarious.

She frequently asks us (and her teachers) “can you say it louder, I can’t hear you.” sometimes when the conversation doesn’t even involve her.
She has to be in the know at all times.

We are still battling her trips into our bedroom in the middle of the night and it really depends on the night.
Sometimes there are no surprise visits, other nights there are several. You would think I would be more scared waking up to her staring at my face.

On the weekends we ask her what she wants to do today and her answer is always “go outside”.
We have tried to be creative with it since it’s been 100* these last couple months.

The girl loves to talk and the things she comes up with are hilarious.
I cannot believe she’s going to be three years old in just two months!