Can someone please pinch me, eleven months already?
This was a big month for Crosby, so I have lots of updates. 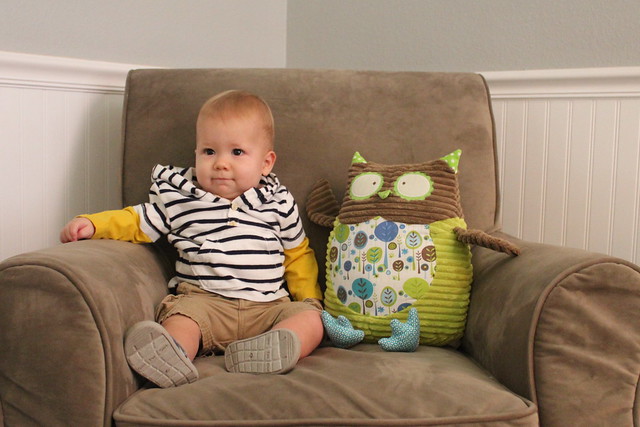 The biggest change this month is that Crosby stopped nursing. He woke up on a Monday morning a couple weeks ago and wasn’t acting like himself. He had no interest in nursing and flat out refused. We decided that Greg would take him to school and he ended up taking a bottle after I left. After I came home from work that day, he was very lethargic and had a fever. He and I spent two hours at urgent care that night and once we got home he refused to nurse again, but he took a bottle. I stayed home with him the next day and the same thing happened. He took a bottle all day. It was a challenging day considering I had to take care of a sick little one, pump, and make bottles for him throughout the day. I thought it was just because he wasn’t feeling well, but part of me knew that he was done. Why would he be taking a bottle with no problem but not nursing? That Sunday night was the last time I nursed him and I had no idea. In hindsight, it probably is better so I didn’t have to make the decision about when to stop nursing, but I definitely wasn’t mentally prepared to stop. Thankfully, I have a freezer full of frozen breastmilk that I worked very hard to build up over the last ten months, so he will still be drinking breastmilk for the next several months. I have continued to pump once a day since, but I will be stopping completely in the next week or so. I am so thankful to have been able to nurse him for ten and a half months, but that doesn’t mean I’m not sad that it’s over. I was not this emotional when I decided to stop nursing Kenley because I had hoped there would be another baby in our future, but knowing that this is (more than likely) the last time I will nurse my baby, it’s definitely different. So now, Crosby is drinking milk three times a day. He has a five ounce bottle when he wakes up, one five ounce bottle during the day at school, and one five ounce bottle before bed. We are slowly transitioning off of the bottle and I sent his milk in a sippy cup the last two days. I think he could care less what he drinks out of, so I don’t anticipate this being a difficult transition off the bottle. 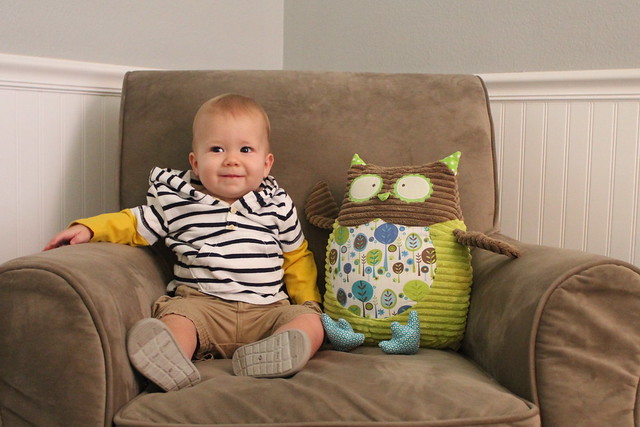 Related, the boy loves his food. Over the past week or so, we have been feeding him whatever we are having for dinner. It’s amazing cooking only one dinner for everyone to eat. One difference from Kenley is that he loves meat. He eats chicken, beef, turkey, and ham. He will eat his veggies, but as long as there is something else to go with them. He also loves fruit, avocado, crackers, Cheerios, Mum Mums, goldfish, really any carbs. The only things he doesn’t care for are peppers and bananas. Since we are the parents of the year and all, we accidentally sent Kenley’s mixed berry applesauce in his lunch this week and he broke out in a rash the same day. I’m guessing it is because his body is just not ready to digest the berries yet (since it’s a 12 month food) but I’m hoping he doesn’t have any allergies related to that. He was perfectly fine otherwise and it cleared up the next day. 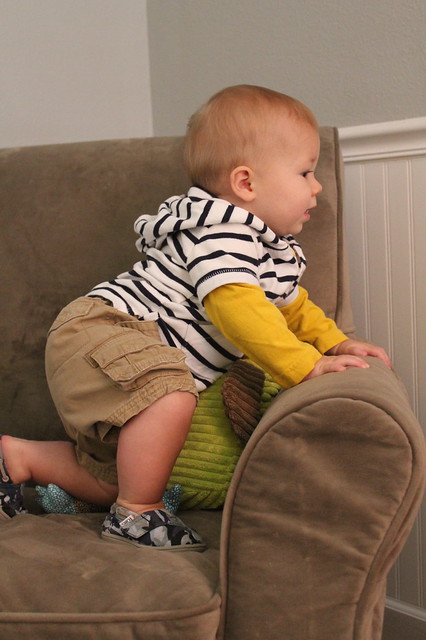 Crosby loves to walk behind his push toys, including the shopping cart, baby stroller, train; as well as anything that will move like chairs, stools, or end tables. He also loves climbing on Kenley’s anywhere chair… good thing he’s getting one for his birthday. He is constantly on the move and his preferred method of transportation is speed crawling (usually towards something he’s not supposed to have) or walking behind something. He has officially taken his first steps and will walk if he’s holding someone’s hand (even Kenley’s), but he’s not ready to do it on his own yet. He is a man on a mission in the playroom and also the master of destruction. He will pick up a toy, inspect it, put it in his mouth, play with it, then once he’s done with it, he throws it and moves on to the next thing. The playroom is constantly a disaster because I cannot keep up. 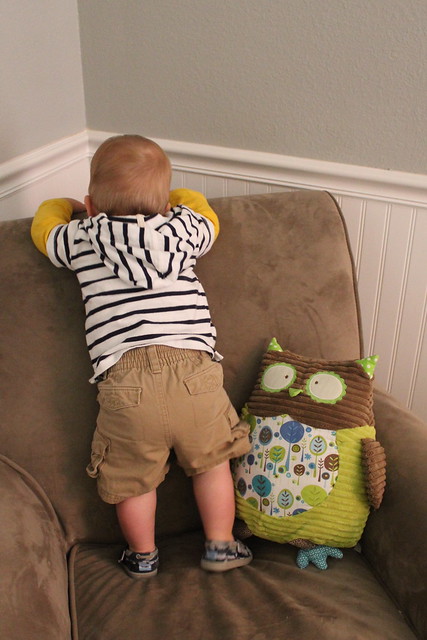 Somewhere along the way, Crosby transitioned to one long nap (seriously, is he a toddler already?). During the week he will go down for his nap between 12-2pm at school. I have no earthly idea how they get him to stay awake until noon during the day because on weekends, he normally takes a short morning nap for us (usually in the car somewhere). Depending on the day, he may fall asleep in the car on the way home from school, but for no more than 15 minutes or so. That usually rejuvenates him until bedtime around 7:15pm. He sleeps soundly all night and wakes up anywhere between 5:30-6:30am. If he sleeps until 6am, we are happy. I’m not sure if he’s sleeping enough during the day, but he’s sleeping through the night and is happy during the day, so I’m not going to worry about it. 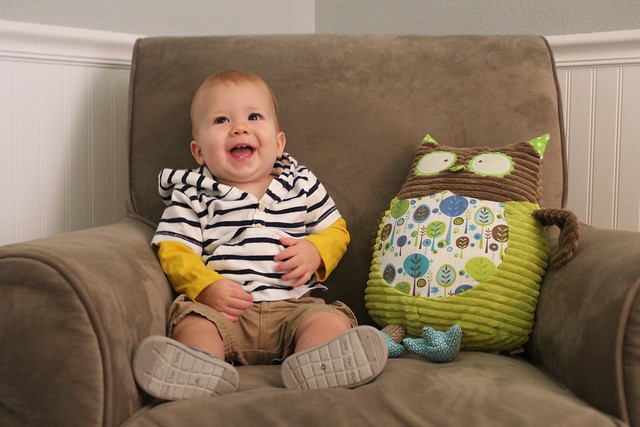 One more month and we’ll have a one year old. That’s crazy talk.