The Inaugural Lake Nona Half Marathon took place on Sunday, October 26th and up until two weeks before the race, I was not planning on making this race my second half marathon. I had already registered for the OUC Half Marathon in December and I was planning to make this my first postpartum race since Crosby. My running buddy Kayla had been training for Lake Nona this fall, so I just had been running with her. Registration for the race actually closed in July, so she had been set on running this race for a long time. She kept asking me if I was going to run it with her and I kept telling her no. Our October calendar was already full and it was the day before Crosby’s birthday so I figured it was just poor timing. About three weekends before the race we ran 10 miles and my thought process changed. We had run 10 miles, I could totally run this half marathon with her. I mentioned it to Greg and he gave me “why not?” response.

Two weeks prior to the race, I had committed to buy someone’s race bib who would not be participating. It was on! I didn’t want to get my hopes up just in case the bib fell through, but I was excited. I headed down to Fit2Run to pick up the race packet on Friday evening, just two days before the race and then I got super nervous. I was a total wreck all day on Saturday. I felt that I wasn’t mentally prepared enough, I had no idea what I was going to wear, and I hadn’t run but just a few times since our trip to Chicago. Not to mention, the race started at 6am on Sunday…by far the earliest race I’ve ever run.

I laid out all of my clothes and gear the night before, set my alarm for 3:45am, and tried to get to bed early. Of course, I slept horribly. I woke up several times in the night thinking I was going to miss my alarm. Finally, my alarm went off and I got out of bed. I met some ladies from the running group at 4:30am and we carpooled down to Lake Nona. I forced myself to eat a bagel with peanut butter even though it still felt like the middle of the night and my stomach was in knots from the nerves. We arrived in Lake Nona and it was freezing (not to mention pitch black!). The temps were in the high 50s so I opted for my arm warmers and capris.

I met up with Kayla and Heather and we made our way to the potty. We headed over to the start line just in time. I felt a little rushed, but once we started running I knew we were going to get into our groove. We had planned on running intervals, just like we trained. My watch was set to run for 4 minutes and walk for 1 minute. The first four miles were pretty easy. I had never been down to Lake Nona, so I was trying to take in the scenery (or at least as much as I could in the dark). It was also good to see a lot of familiar faces from the running group as we were running.

It’s a good thing that I didn’t look at the course map too closely before the race. I think I would have been a little discouraged when we turned after mile four, knowing we had a long stretch to go before we turned around again. Just before mile 5, we ran on the overpass over 417, also known as the biggest hill of my life. Once we made it over the hill, it was pretty smooth sailing. The next two miles we ran out to the turnaround spot, so we were again seeing some familiar faces, including Kayla’s mom which was a fun surprise for her. We turned around just after the 8 mile marker, which was slightly defeating knowing how far we had to run back. This was the “home stretch” but it was also 5 miles long, so it didn’t feel like the home stretch.

We were rocking it, so we just kept going, albeit we were far less chatty than we were at the beginning of the race. That pesky overpass made its appearance again right between mile 11 and mile 12. I still stand by the fact that miles 10 through 12 are the worst and that hill did not help at all. At that point, I just wanted to be done. Lucky for me, Greg & the kids were exiting from 417 so he honked and waved as they passed us! We had briefly texted each other during my short walk breaks, so I knew they were on their way, but I didn’t expect to see them. It was a great little push. We were getting closer to the end, but I couldn’t see the finish line, so that was somewhat annoying. Several spectators said it was “right around the turn” and they were right….as soon as we made a slight turn around the 13 mile marker, there was the finish line! 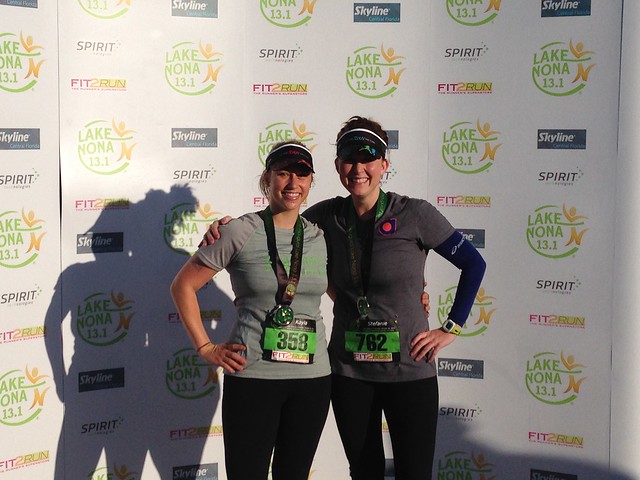 My official finish time was 2:30:26! It’s not a PR (personal record) but I am very happy with this time. While I was finishing the race, my mind went back to that same Sunday morning one year ago. Greg and I were in the hospital waiting to meet our new baby and we still didn’t know if we were going to have a son or a daughter. Crosby Martin gave us our “it’s a boy” moment at 8:25am that Sunday morning and I crossed the finish line at 8:30am on the eve of his first birthday. It was a special and accomplishing moment. 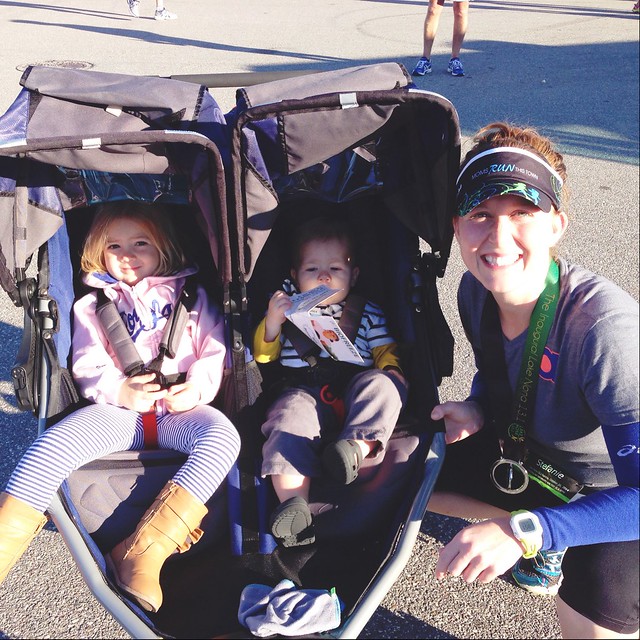 Now, onto getting ready for OUC in just five weeks!