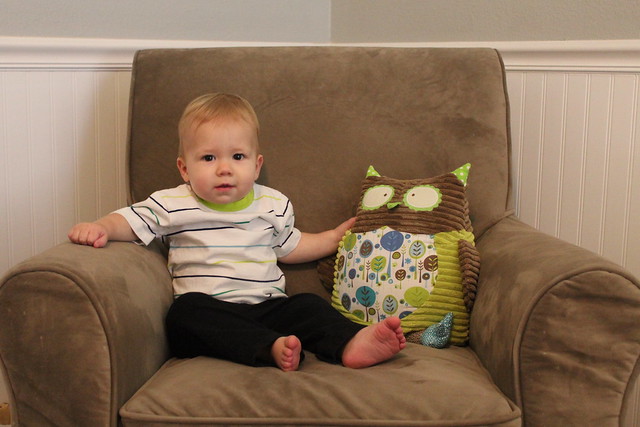 It seems like he has changed so much this month. He is starting to talk more and more, even though the majority of his words aren’t recognizable. At first, it was very hard for me to even hear some of the words he was saying. I have been used to clear toddler vocabulary and hadn’t even thought that I needed to go back to baby talk. When my parents were here for Crosby’s birthday party, my dad pointed out several words that Crosby was saying or repeating and I hadn’t even realized it. Since then, I feel like he’s saying a lot more now. I just needed to get into the right mindset. His favorite words include dada, mama, ruff (as in “what does the dog say?”), hi, bye, boo (book), bath, ball… you know, all the good “b” words. He does a pretty good job of mimicking too.

C man had an ear infection last week which landed us in the doctor’s office. He had been sniffling and coughing for a little while, but when he work up on Monday morning, he clearly wasn’t feeling well, so off we went. After a couple rounds of antibiotics, he was back to normal. There has been a lot going around this month between the two of their classes, so I’m thankful it has only been an ear infection so far. Crosby is still drinking breast milk, so I’m hoping that is keeping his immune system up. I think we can probably make it another month before we run out, so we will probably start introducing whole milk in the next couple of weeks. 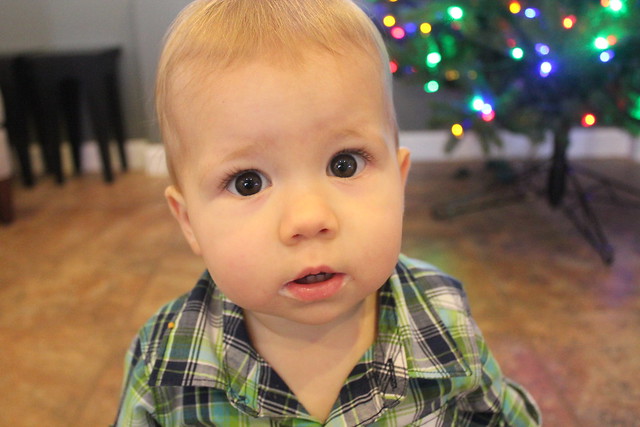 The boy loves to eat! He eats whatever we are having for dinner most nights and still isn’t a huge fan of his green vegetables.

At school, Crosby’s nickname is the International Man of Danger. His teacher always tells me stories of him climbing the book shelf, throwing things in the trash can (including his shoes!), and just being a complete destruct-or of all the toys in the room. I can see it because he’s the same way when we get up to the playroom. He’s all over the place, pulling toys down, throwing them then moving on to the next.

We sure are thankful for this little guy!