I completed my third half marathon and second OUC half marathon on Saturday, December 6th. This particular race was my first half marathon back in 2012 after Kenley’s first birthday. It only seemed fitting to run it again this year after Crosby’s first birthday. At the time I registered, I didn’t realize I was going to get bitten by the race bug. I snuck in the Inaugural Lake Nona 13.1 at the end of October and I have already registered for two more for 2015. Going into this race, I was feeling pretty confident since I had just ran 13.1 miles six week prior. I had continued running with Kayla and our goal was to beat our Lake Nona time which was 2:30:27. 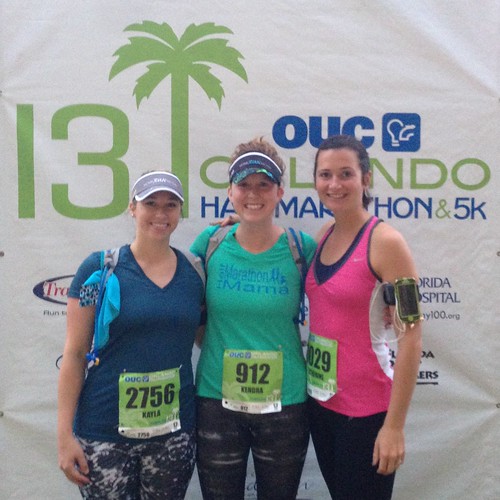 It was a late start time of 7:30am, so I didn’t get up until 5am. Kayla picked me up and we headed downtown. During our drive, it was raining, so we were hoping that it would pass and that the roads would dry quickly. By the time we were in place at the start line, the rain had stopped and the sun had been up for a while. I didn’t really think about it at the time, but it was pretty warm. Two other gals from the MRTT running group decided to run with us on race day. 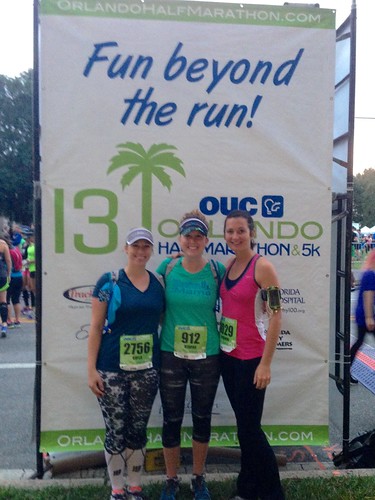 The race started and we made our way up to the start line. We kept with our plan to run intervals of 4 minutes, then walk for 1 minute. It’s always weird stopping so early in the race to walk especially when adrenaline is pumping and the streets are crowded with people. We made our way to the edge and got into our groove, alternating running and walking. The first few miles were very crowded so I was concentrating on not running into someone while also concentrating on not falling on the cobblestone roads. Our 5K time was 36:18, we were running around an 11:41/mile pace which was right on target. It was getting hot, so I was consistently drinking out of my Camelbak which had five packets of Cocogo in it (lemon lime). Around the 5 mile mark and about 45 minutes into our run, I had a GU (chocolate peanut butter). I’ve only recently started using these during longer runs and I do like them. I wasn’t very hungry at this point, but I knew that I probably needed it. It was only getting hotter as the morning went on. 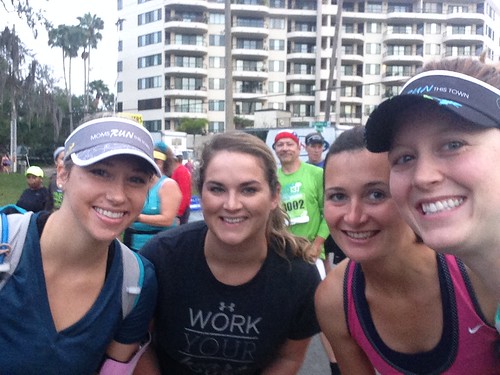 We kept going and were making good time. Our 10K time was 1:12 and we were averaging 11:38/mile. I was feeling pretty good, but knew we still hadn’t made it to the halfway point yet. Each time we passed a mile marker, I felt like the miles were flying by. All of a sudden, we were at mile 7, then mile 8. Then, it started to get harder. Real hard. As we were passing Mills Market, the road conditions were less than ideal. My legs were feeling it from the cobblestone and it was downright hot and humid. I kept going on my Cocogo/water in my Camelbak. Our 15K time was 1:48, averaging 11:37/mile. We were definitely still on pace at this point. Kayla, Sandy, and I were still together, but Alyssa had dropped back a little bit. We passed a house that was handing out shots of beer. Part of me wanted one so bad but as we passed, the smell made my stomach churn. We decided to stop at the porta potty right around Lake Davis so Kayla could go potty real quick. I hopped up on the curb to stretch my legs and I couldn’t believe how tight my calves were. At this point, it was around 9:15am and the sun was just beating down on us. Did I mention how hot it was? As we started running again (up a hill, I may add), I could NOT believe we still have 3+ more miles to go. I had no idea what had happened, but I hit a wall. I knew I should have taken my second GU at this point, but I didn’t think I could stomach it.

We started walking a little more than our one minute interval called for and our pace slowed down. The three of us were discussing what we should do at this point. I wanted to keep running 4 minute intervals, but I knew I couldn’t keep our current pace, so I slowed down a little bit. As I kept running, I kept an eye on Kayla and Sandy who were a few feet back, but around the 11 mile mark, I looked back and I didn’t see them. My goal at this point was to just make it through 4 minute of running, then I could get a little break. Then the next four minutes, and so on. At some point, Greg had sent me a text saying they were on Rosalind Street and they would see me towards the end. I had NO concept of where we were at this point, so every street coming up I was so hopeful it was Rosalind. It wasn’t. The race atmosphere started to pick up a little bit around mile 12, so I was determined to finish as strong as I could. I started walking only 30 seconds instead of a full minute and I skipped a walk break entirely because I knew I would be seeing Greg and the kids soon. 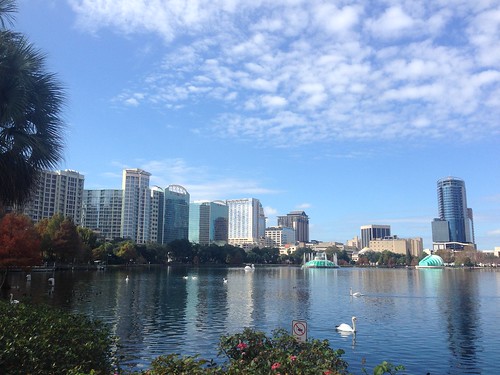 Finally, I saw Lake Eola and knew I was close. As I approached Rosalind I ran over to Greg and the kids. Kenley looked so confused about what was going on. I gave him my Camelbak because it was near empty at this point and there was no need for it. He asked if I was ok and I almost started crying. I could see the finish line on the other side of the lake, but I really didn’t want to keep going. Obviously, I wasn’t going to stop, but it did cross my mind. I had two right turns left to make and I was off. I ran past a couple and the girl shouted that she had just gotten engaged (!!) so, of course, I almost started crying again. One more right turn and there it was….the finish line! 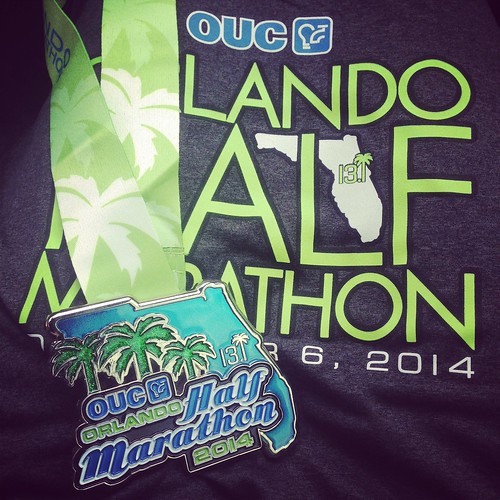 My official time was 2:33:57. I missed my goal by four minutes.
After running Lake Nona, the OUC race is a more challenging course. The cobblestone roads and the rolling hills were very tough on my body. I use the term “hills” loosely, but I felt them nonetheless. The later start time was also a factor, especially since it was abnormally hot and humid for the first weekend of December. It was draining, both physically and mentally. My feet, ankles, calves, quads, and shoulders hurt for a couple days following the race. 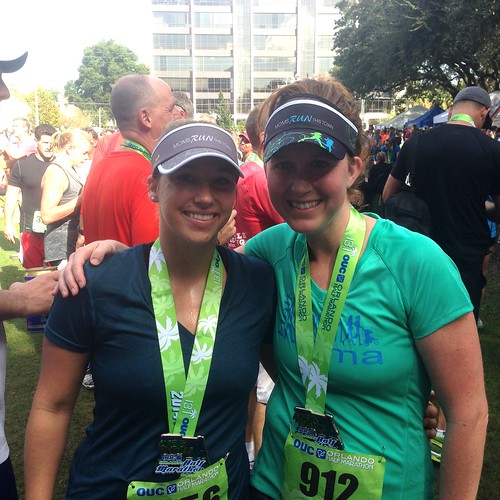 At the end of the day, I ran my third half marathon and I am so proud of that accomplishment. This has been my toughest race to date and there were lessons learned.
Now, it’s time to get ready for Celebration, we WILL beat 2:30!