It has been quite a while since I first shared about our cloth diaper experience, so I want to give a big update on what we’ve learned and where we are today. This post is long overdue and has been sitting in my drafts for, er, over eight months. My apologies.

Crosby started using cloth diapers around two months old when Kenley was still in diapers, which seems like a lifetime ago. Two weeks of two kids in diapers and we were more than ready to start the potty training process. Oh, the laundry….so much laundry. One thing we learned very quickly was that the cloth diapers Kenley was wearing were not going to hold up for Crosby. The elastic was completely stretched out in all of her diapers since they were so heavily used for two whole years. Yep, we used the same diapers from start to finish with Kenley. There are refresher kits available to update the diapers to prolong the use, but the decision for us was to spend time updating our old diapers or spend money on buying new diapers. Time won and we decided to purchase some new diapers. Another reason I chose to buy new diapers for Crosby was that there were better diapers out now! Times were a-changing. I had purchased five of the new BumGenius Freetime diapers on sale for baby G2 and I immediately fell in love.

Quick recap, we used BumGenius 4.0 diapers with Kenley and loved them. The BumGenius brand is amazing and the diapers were great. The 4.0 diapers require you to stuff the inserts into the diaper cover. BumGenius then upped the game and made an all-in-one diaper (the Freetime) that required NO stuffing! Not only is there no stuffing, then are also less bulky than the 4.0 diapers, which is another reason I love them so much. I wanted to replace my entire stash with the Freetime diaper, but I ended up keeping a few other brands around. Here is the rundown of our diapers:

BumGenius Freetime – Again, love these! These are also available at Buy Buy Baby and you can use a coupon, making them only $15! 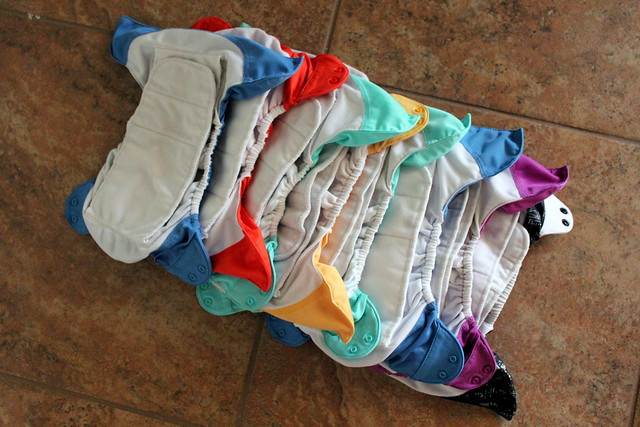 BumGenius 4.0 – The Lovelace print was one of the last ones we got for Kenley, so we still use those two diapers. Crosby has rocked that print, but they are usually at the bottom of the pile since the elastic is getting pretty stretched out. Another good thing about the 4.0 is they double as swim diapers if you remove the inserts.

BumCheeks – I ordered one more BumCheeks to add to the two we had with Kenley. These require stuffing, but I really like the bamboo inserts. I have only ordered these off Baby Steals. 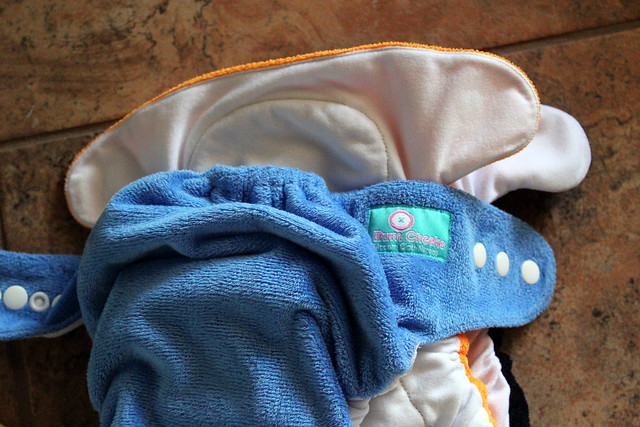 Best Bottoms – I wanted to try a new brand this time around and Best Bottoms came highly recommended from a friend. They are a little bit different than the BumGenius brand as the insert snaps onto the cover. The cover grows with the baby, but the inserts do not, so they are sized small, medium, and large. The Best Bottoms are not bulky and the prints are adorable!

GroVia All-In-One – These have been my least favorite diapers, mainly because of the way they fit the kids. We used them far longer with Crosby than we did with Kenley, but they have been retired. The elastic around the legs was really tight, so they may fit babies with leaner legs a little better.

As far as our routine and other accessories, we really haven’t changed a thing. At home, we use cheap wash cloths as cloth wipes and they get washed with the diapers. The only annoying part is that I find them ALL over my house (clean, of course). We could not live without the BumGenius Diaper Sprayer, which has come in handy for many other reasons along the way (i.e. a puking toddler in the middle of the night). We rotate between two Planet Wise pail liners that hold the dirty diapers between washes and we have two Planet Wise wet bags for school and on the go. We had to replace one of the wet bags that we got for Kenley because the zipper broke, but the other is still going strong. They are very durable and have gone through the wash more times than I can count. I recently saw something that is called the Diaper Dawg and it looks amazing, but I can’t say for sure since we don’t have it. This is something that would be highly useful and one of those things where you ask yourself, why didn’t I think of that? 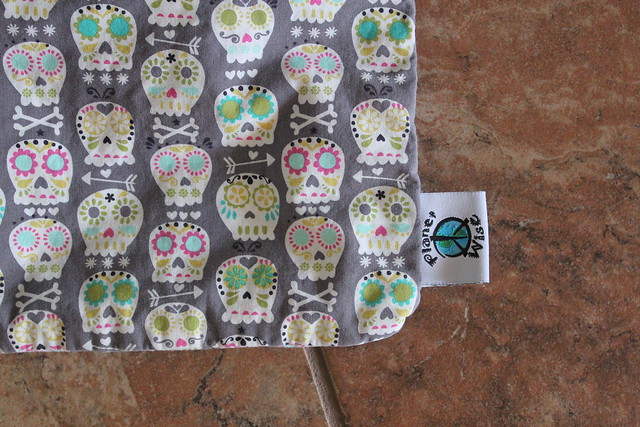 This whole process is really second nature to us. We’ve been cloth diapering continuously for over three years now, which is mind blowing to me. I’m not really sure how that is possible. While cloth diapers are always our first choice, we do recognize that disposable diapers are sometimes just more convenient. The rare occasions that Crosby has a diaper rash (most likely from antibiotics), we lather him up with diaper cream and put him in a disposable until his rash is gone. He wears a disposable every night and whenever we are traveling. Sometimes if we will be out for an extended amount of time, we’ll opt for disposables. We have really only bought the Up & Up brand of diapers from Target which have worked great for both of our kids and they are far cheaper than the name brands.

What other burning questions do you have that I didn’t cover? Who is considering cloth diapering?