Crosby is 15 months old today! He had his 15 month checkup with the doctor today and he is right on track and doing well! It seems like we’ve been to the doctor a lot in the past two months. He’s had two ear infections recently which has caused him to be on antibiotics for more than I would have liked. We had to go back after the second infection to make sure his ears were clear, which they were, but then we ended up back in the office the following week because I was sure he had developed another one. The ears were clear, so it just seems like his molars are causing him to be uncomfortable. 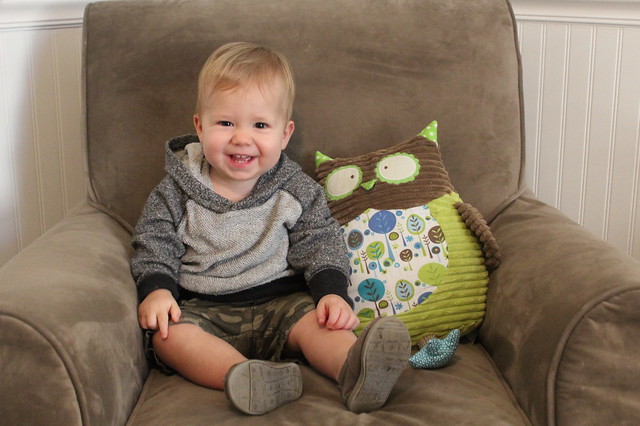 The climbing is still in full force and I don’t see it slowing down…ever. Not only can he climb up, he also does a remarkably good job of getting down. He can climb up onto our bed and when he is ready to get down, he just turns over onto his stomach and slides down feet first. It’s pretty impressive. He can also climb up onto the couch and the futon upstairs and he likes to walk back and forth before he is ready to climb down. Just because he CAN get down, doesn’t mean he does it perfectly every time. He still has his fair share of spills, but I am less concerned when he is up on the furniture these days, even though we aren’t promoting running around on the couch. 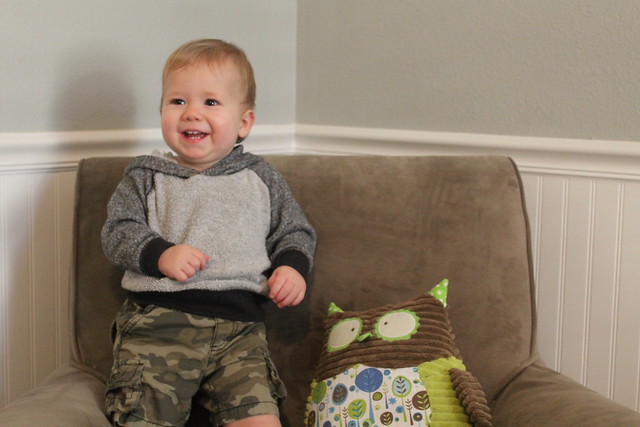 Crosby’s favorite thing right now is cars. He LOVES them. He will hold them, roll them, chase after them, and talk about them all the time. He walks around pointing and saying “CA!” to anything that resembles a car. Cars, trucks, tractors, construction vehicles are all “cars”. 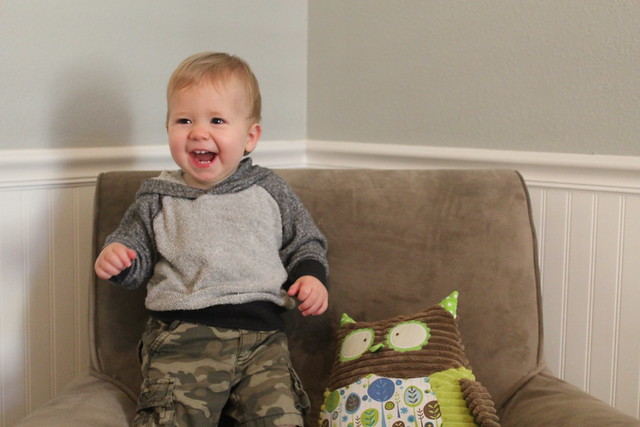 He is a great eater most of the time and is doing much better with his green veggies. Some of his favorite foods are blueberries, peaches, nectarines, grapes, pears (really any fruit except for apples), chicken, goldfish, ham (but not ham and cheese together), grilled cheese, chicken nuggets, cooked carrots, toast, pasta, and Annie’s mac & cheese. He only drinks organic whole milk for breakfast, lunch and dinner, then has water throughout the day. He eats whatever we are having for dinner and usually does it without a fuss. 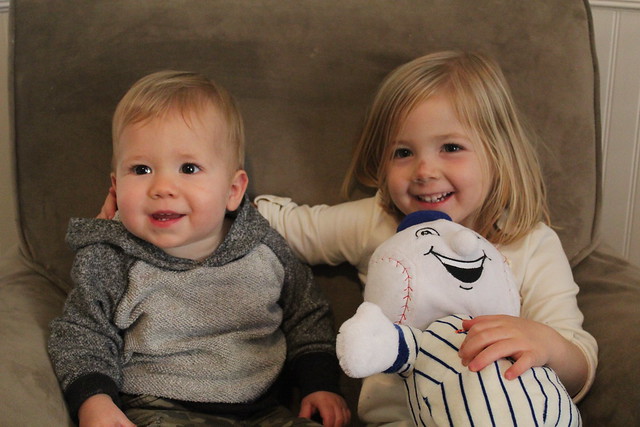 Weight – 24 pounds 4 ounces (70th percentile)
Height – 30 3/4 inches (30th percentile)
Head – 18 inches (65th percentile)
Hair – He is on a regular haircut schedule, the next cut is Thursday.
Teeth – 9 total, 4 on top, 4 on bottom, and 1 molar finally popped through. The second one isn’t too far behind. I wish they would all just come in already!
Eyes – Brown (see above!)
Clothes –  Mostly 12-18 month, some 18-24 month pajamas & shirts.
Diapers – Cloth diapers by day, disposables by night, size 4
Likes – CARS, eating, shaking his head “no”, taking a bath, splashing in the bath, babbling, throwing balls (and toys), trying to repeat words, books, push toys, taking the front cover off the speaker (which is a no-no), going upstairs (both to play and to climb the stairs), climbing furniture, the kitchen stool, playing hide & seek, waving, clapping.
Dislikes – lying on his back to have his clothes changed, having his nose wiped, staying in one place.