This little guy is 16 months old! 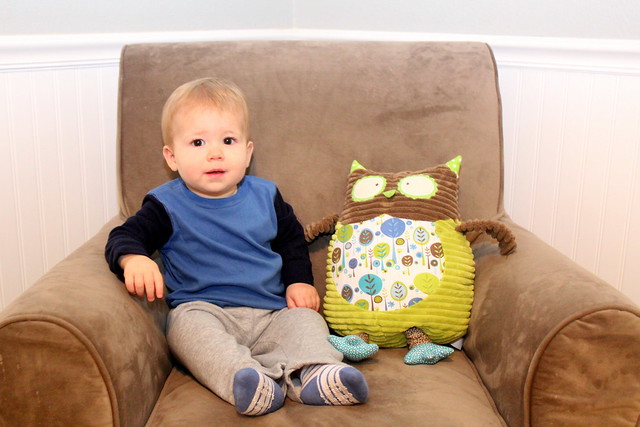 Crosby had a rough couple of days this month and got his fourth ear infection. He was the most lethargic I have ever seen him. I picked him up from school after he had fallen asleep on someone’s lap that morning and was just not acting like himself. He then fell alseep in my arms at the doctor’s office (don’t worry, he still had a firm grasp on his cars). After the diagnosis, we headed to Target to get his antibiotic filled. By this time, it really was nap time, so I decided to carry him in rather than putting him in the cart. Of course, the pharmacy took longer than expected and my 24 pound baby passed out in my arms. We spent the rest of the day snuggling on the couch. He was in and out of sleep all afternoon, wouldn’t eat anything, and barely drank his water. I felt so bad for him. The next morning (after a couple rounds of antibiotics), he was feeling much better and was signing “eat” as soon as he woke up. I, on the other hand, woke up to two very sore arms from carrying 24 pounds of dead weight around all day. We are hoping this was the last of the ear infections, but I’m not so sure. Every little tug of his ear gets me worried now. 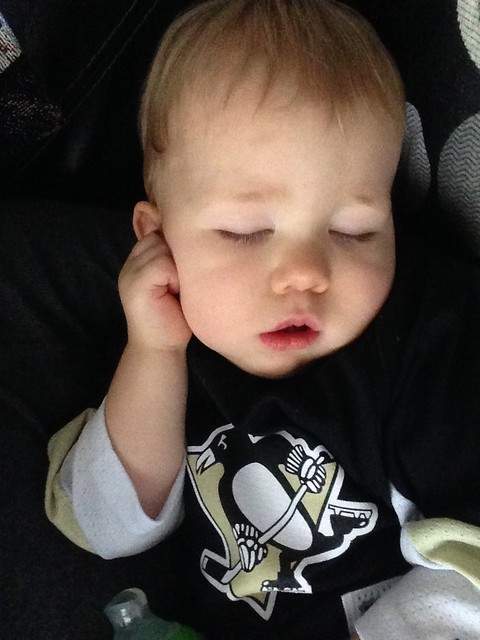 On to more exciting things… Crosby is talking and signing more and more each day. Kenley had such a robust vocabulary at this age, but Crosby is signing so much more than she did. Each week he is picking up a new sign from school and using it on a regular basis. This week, he started to use the sign for “reading”. The boy does love his books, so I’m not surprised. Each meal time includes signs for “more”, “milk”, and “all done”. We are still working on using “please” more frequently. I love that his teachers use sign language with them so much and I love how much he’s picking it up. It is really amazing. Some of his favorite words to say are: car, hi, bye, uh-oh, Kyler, mama, dada, and mine. He is starting to master his body parts: head, ear, nose, mouth, and his most favorite of all BELLY! 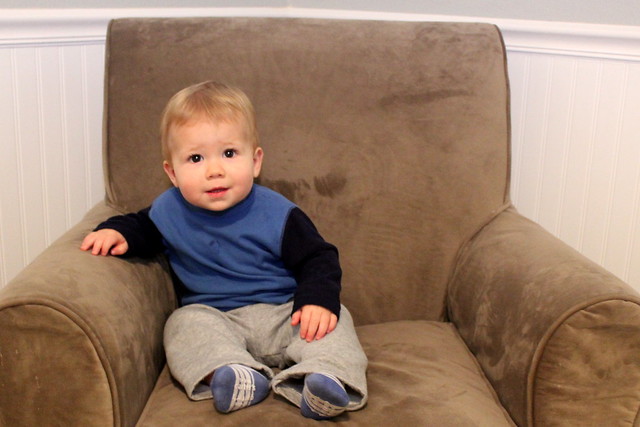 He absolutely loves throwing objects into the garbage can, laundry hamper, bath tub, toilet, bins, buckets … really anything. If you are ever missing something, I guarantee that Crosby has put it into something else. I recently found a board book in our garbage can in our bathroom and a shirt in Kenley’s bath tub. He’s a funny dude, that’s for sure.

Crosby has been sleeping great for several months now. We usually start reading books around 7pm and then he is down for the night. This month it seems like he has been getting up earlier (closer to 5:30am rather than 6am), except for the nights that he wears his fleece zip up footie pajamas. Greg mentioned it to me when I was away for work and I just thought it was funny, but it really seems like he sleeps in later EVERY time he wears them! We have even tried them two nights in a row and it has worked. Maybe it is because he is all warm and cozy in them? Who knows, but he will wear them every night if he has to!

Weight – Around 24 pounds
Hair – His hair is growing so fast! He definitely needs another haircut soon.
Teeth – All four of his molars have broke through, thank goodness! He has 12 teeth total. I’m sure the next four are not too far behind.
Eyes – Brown
Clothes – A good mix of 12-18 months and 18-24 months. I’m only buying 2T and up from here on out.
Diapers – Cloth diapers by day, disposables by night, size 4
Likes – cars, trucks, trains, airplanes, birds, Daniel Tiger, food, balls, running, throwing food on the floor, books, fruit, Goldfish, playing with whatever toy Kenley is playing with, showing his belly
Dislikes – apple slices, getting his diaper changed, being contained, staying still