Let me quickly rewind a couple weeks. Our MRTT chapter participated in the Moms Run This Town winter virtual was on February 15th. Kayla and I ran the 10K (6.3 miles to be exact) in 1:07:53 which was a 10:41 pace. I wasn’t really feeling it that day and around mile 4 I could not believe we still had two miles left. As always, it was a fun event, but I didn’t feel like I was in “race mode”, I just treated it as a long weekend run.

Fast forward two weeks and I was planning to do the Best Damn Race 10K. BDR also had a half marathon option, but I didn’t want to commit to the half marathon knowing that I was going to be out of town for work in February with no guarantee to get in my runs. I had heard good things about the race so the 10K it was! The night before the race I was not feeling it at all… I hadn’t picked up my packet yet so I knew I had to get to downtown by 5:45am with plenty of time to get my packet and get back to my car before the 6:45am start. Both Kayla and Sally couldn’t run the race, so I was without a running buddy. I was really just feeling sorry for myself, but I made the decision to sign up (and pay money) to run the race so I was going to do it.

Once I got to the expo to pick up my packet, I started to get my usually pre-race jitters. It was a little bit chilly and the forecast called for rain, but the weather was actually really nice at the start of the race. I made the decision to make the most of this race. It was only 6.2 miles so I was going to push it. I wanted to run the whole time and I wanted to PR (set a personal record). My previous 10K PR was just two weeks ago when we ran the virtual race. In the back of my mind I thought that it would be awesome to run it under an hour. I just had ran my first 5K under 30 minutes so could I double it and do this 10K under an hour? 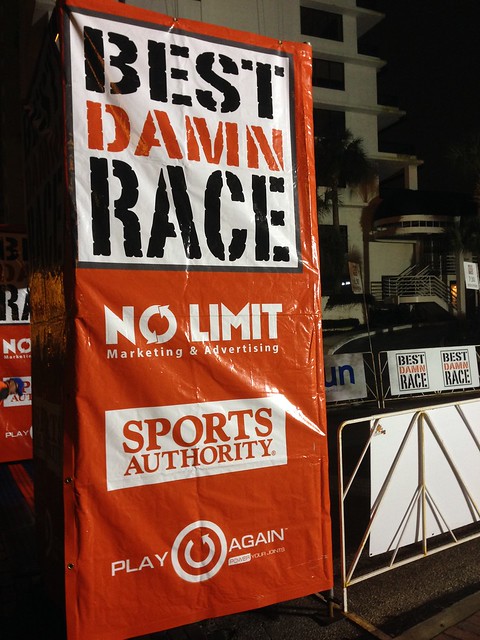 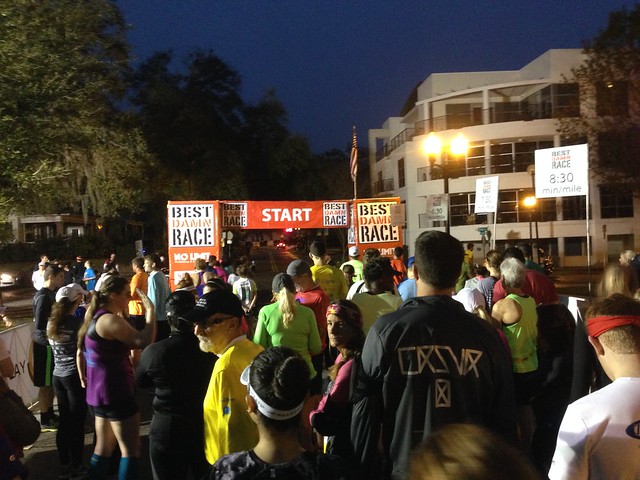 It seemed like a very small group for the 10K, which ended up being good since the roads weren’t crowded. We started the race as the sun was coming up, even though it was really cloudy and threatening rain the whole race. I wanted to make sure I didn’t start out too fast, but I also wanted to try to stay around a 10 minute/mile pace. Once I approached the first mile marker (i.e. my Garmin watch), I felt like I was in a good pace. First mile: 9:42 – awesome! I gave myself a little cushion too if I start to wear down towards the end. Miles two and three I thought about everything and nothing at the same time. I tried not to look at my watch and just run. I was also trying my hardest not to trip on the cobblestone on the downtown roads. Second mile: 9:40 – even faster! I missed my third mile split, which really annoyed me, but I didn’t think it could have been any slower than ten minutes (it wasn’t – 9:39!). When I saw my time for mile four (9:44) and overall time of under 39 minutes, I KNEW I was going to get under an hour. I was determined…and you could tell – I ran mile 5 in 9:22 and I honestly am not sure how that is possible. Mile six felt like an eternity. I felt like I should have been so close to the end, but the course was SO boring at this point. It hit mile six (9:22!) right as I turned the corner next to Lake Eola. I could finally see the finish line, but it still seemed SO far away. By this time, my watch was around 58 minutes so I picked it up a little bit more and was practically sprinting at this point. I was too close to not get in under an hour. Right as I was crossing the finish line the official time clock changed from :59 to 1:00 and I stopped my watch at 59:56 so my adjusted time had to be under an hour. I got my medal and was huffing and puffing. My watch alerted me that I had my fastest 5K time and my fastest 10K time. I DID IT. I checked my phone to see the tracking text alerting me (and Greg at home) that I had finished:

I beat my goal by 7 seconds and my previous 10K time by 8 minutes (can you tell I’m a numbers person?)!!! I ran a 9:41 min/mi for 6.3 miles… I still cannot believe it. It is so rewarding knowing that all these runs have been paying off and that I am truly getting faster. Also, I placed in the top 20 for females in my age group! (I told you it was a small race, ha!). 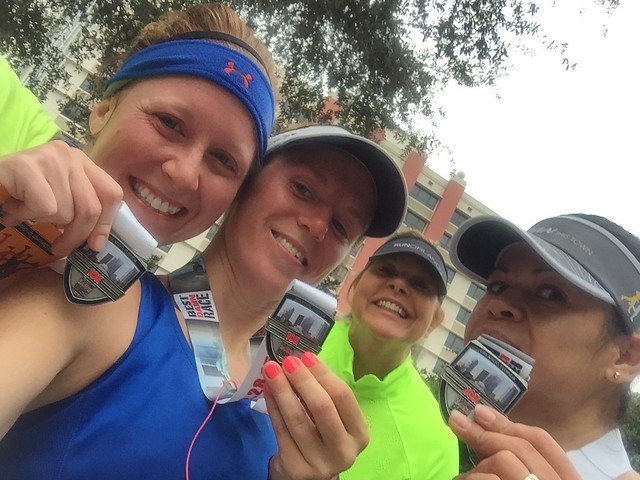 Mentally, I felt great the rest of the weekend, but my body did not feel the same. I can tell a huge difference when I run races downtown on the uneven roads and the cobblestone. My feet hurt from sliding around in my shoes and my legs took a beating. I followed up this race with a 3 mile run on Tuesday and I had a new outlook on my pace. I am definitely closer to a 10 minute mile than I am to an 11 minute mile. Next up: Tomoka Half Marathon in less than four weeks!