The article Move Over, Barbie: New Run Doll Line Expanding popped up on Facebook this week from another running mama, which led me to Go! Go! Sports Girls. How did I not know about these dolls? AMAZING.

I love that Rachel Hollis’ bikini photo is going viral, stretch marks and all. Naturally, I started following her on Instagram this week.

I think I’ve mentioned before how much we love the Re-Play plates, bowls, cups, etc. for the kids. How cute is this spring sorbet set?

Easter is right around the corner! I’ve seen this Bunny Hop Sweatshirt floating around various blog posts this week, but I had to share. Does it get any cuter than this?

You’re up! What are you loving this week? Please share and don’t forget to check out what these ladies are loving! 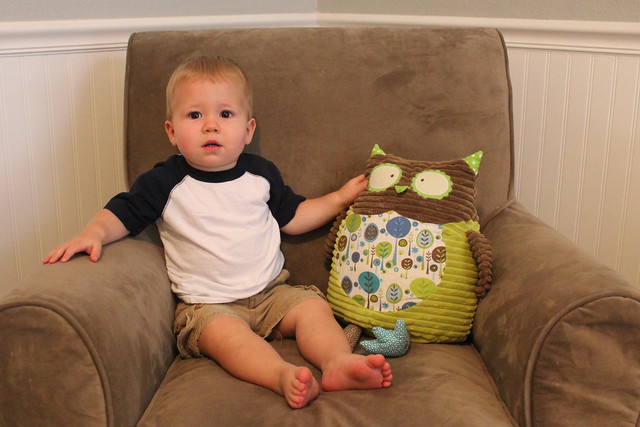 I totally jinxed us last month when I mentioned how great he had been sleeping. Daylight Savings Time really messed us up this month (me included!). Crosby went through a rough week or so and had a strong opinion about not going to sleep on his own at bedtime. There were a couple nights where he thrashed around in his crib just long enough to be overtired and he wouldn’t let himself go to sleep. Begrudgingly, we rubbed his back until he fell asleep on those nights and then he was up a couple more times in the night. This is definitely not a habit we wanted to get started. After a couple nights and us finally deciding to let him figure it out, he has been back on track. With the time change, we were putting him down a little later, but now we are making a point to start reading books by 7:00pm so he isn’t extremely tired by the time he goes in his crib. His teachers do have to rub his back to sleep at school sometimes because he just doesn’t want to stop playing. He will try to get off his cot and run around. At home, it really depends on the day. Sometimes he will go right down for naps, other days we will rub his back to get him to calm down. 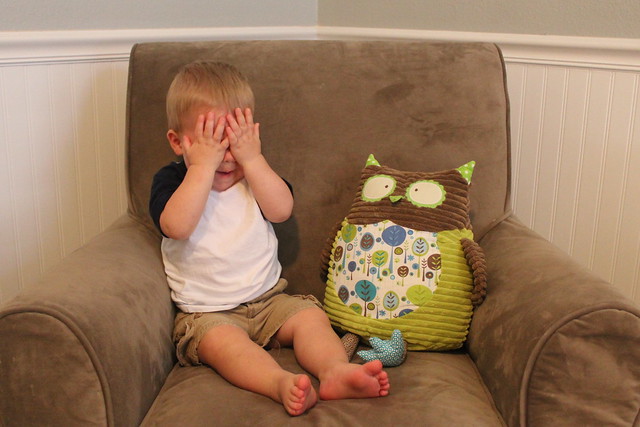 Another monthly update and another ear infection. We are getting pretty good about figuring out when he has one, which is good I guess. On Monday, the doctor said it wasn’t a full blown ear infection, but it was infected nonetheless; enter yet another round of antibiotics. This ear infection didn’t knock him out as much as the last one, thankfully; but he hasn’t had a fever with either of the last two, so that’s definitely a common symptom that doesn’t apply to C man apparently. 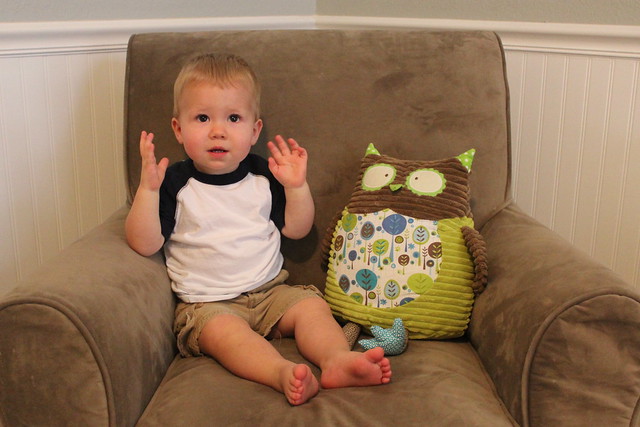 Each day he is more and more like a toddler. He tries to repeat anything that you say and will babble on and on. He has a handful of words that are clear, but he also has a big sister that does a lot of his talking for him. She will frequently report that “he wants more milk” or “he said more please”. He is starting to say words that he also signing which is fun. He is very into his books right now and his teachers say that he’s a very good listener when it comes to reading books at school. He will sit on the floor and listen intently. I think this is the only time he’s not on the go, when there is a book around. We try to keep his bedtime consistent with Kenley’s, so we read 3-5 books at bedtime (Kenley reads 3 books to prevent the “one more book” stalling bedtime game to go on and on). He is at the age where the excuse “he’s a baby” doesn’t really apply anymore but still is too young to understand certain things, which is totally confusing to Kenley. She definitely thinks it should be a fair playing field so when he does something he’s not supposed to, she’s right there with him saying “but Crosby did it.” They sure are funny together though. 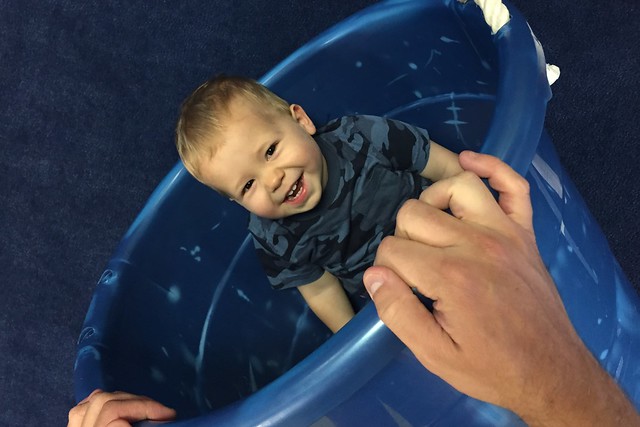 Weight – Between 25 and 26 pounds
Hair – He has totally lost his baby hair. Since his last haircut his hair is now coarse and officially “little boy” hair.
Teeth – 12
Eyes – Brown
Clothes – I said I was only buying 2T, but I had to buy some 18-24 month short sleeve tees for him. He had mostly long sleeve tees and it decided to become summer all of a sudden so we needed some shirts stat. I believe he has moved up to 18-24 months clothes in all areas, but he’s not quite ready for 2T yet.
Diapers – Cloth diapers by day, disposables by night, size 4
Likes – Playing hide and seek, yelling “rawr”, saying “shhhh” (with his finger over his lips), cars, books, reading, Daniel Tiger, running, climbing, opening doors, being outside, playing at MyGym, food…all food, playing in the teepee, riding in the wagon, push toys, stacking blocks (then knocking them down), throwing things in the garbage
Dislikes – Taking an antibiotic, getting his clothes or diaper changed, being hungry, sitting in his high chair without any food