Just this week Crosby’s vocabulary has exploded. Greg was gone for a few days for work and was shocked when he came back to see how much he’s changed. Thankfully his words are starting to flow because he had a couple weeks where he was very frustrated that he couldn’t communicate properly what he really wanted to say. There was a lot whining and pointing and getting upset at us because we kept asking for him to use his words. He is putting two words together now like ‘hi daddy’ and ‘here go’. He continues to sign, but also says the words. His favorite word right now is ‘no’ and my favorite that he says is ‘yeah’ as he says it so perfectly and in the right context. 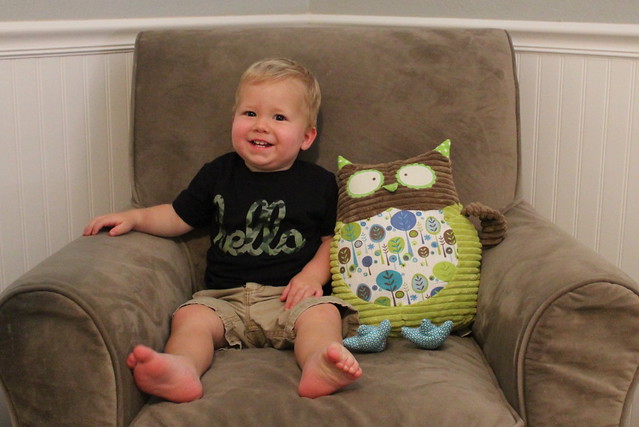 He is becoming quite the toddler and asks to ‘walk’ when we get to school. He knows he must hold hands, so he will grab mine and reach out to grab Kenley’s hand as we make our way up the sidewalk. It’s really cute. When you are holding him and he doesn’t want to be held, he points to the ground repeating ‘down down down’.

Crosby moved into a new class this month as school ended and summer camp began. He has graduated from the infant department and moved over to the toddler department. Side note: Kenley moved from the toddler department to preschool….how is that even possible? Crosby is enjoying his new class and we are getting reports that he loves to climb on everything in the new room… not surprising. He can now climb up into his high chair and has gotten up onto the kitchen table a handful of times. The most recent time ended in him falling onto the chair and then onto the floor and he hasn’t climbed back up there since. However, we are constantly reminding him to keep his ‘feet on the floor’. 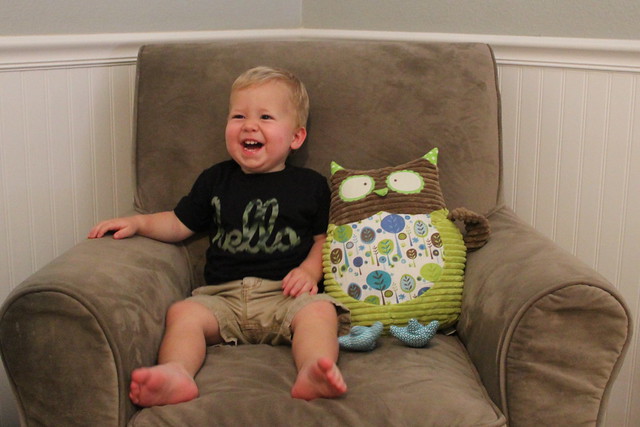 Since the move to the new room, his nap time has been around an hour so by the time 7pm rolls around, he is ready for bed. His new thing is to sleep sideways in his crib with his feet sticking out of the rails. He will also push his feet against the wall and slide his crib away from the wall. Each morning we go in and see that it’s about six inches away from the wall. I’m not really sure how it’s comfortable, but whatever works I guess. He does take a little bit longer nap at home on the weekends. He loves sleeping with his lovies and using them as chew toys as new four new teeth pop through.

Crosby is doing very well with his animal sounds, he can identify a circle, and we are working on his colors. He loves to name different types of vehicles (cars, trucks, airplanes, trains, and construction equipment) and he is really getting into trains. Of the few train tables we have been around, it’s been hard to pull him away. He also loves our Lego train set and will drive Lego cars around the tracks. I think this will make shopping for his birthday easy come October. 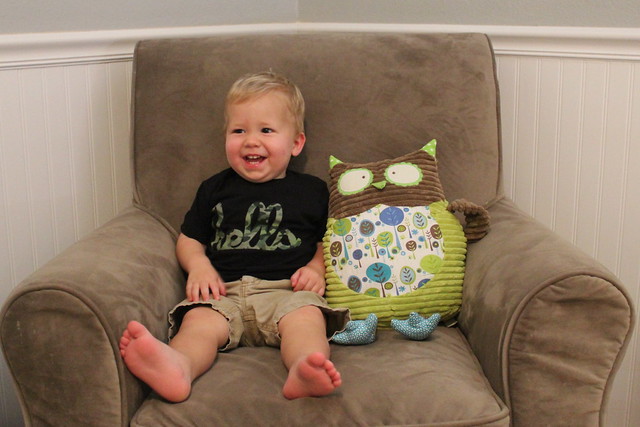 Twenty month notes:
Weight – 25-26 pounds
Hair – Brown, thick, and growing so fast!
Teeth – 12 but a couple others have poked through!
Eyes – Brown
Clothes – 18-24 months and 2T; size 6 shoes
Diapers – Cloth diapers by day, disposables by night, size 4
Likes – Choo choos and the Lego train set, saying no, swimming in the pool, most foods, cars, trucks, pointing at airplanes and birds in the sky, walking into school, running, being outside, Daniel Tiger and Mickey, reading books, the digger, climbing on everything, riding in the wagon, pushing his lawn mower, laughing and being tickled
Dislikes – Getting his clothes or diaper changed, laying down on his back, the time between getting out of the bath and having his pajamas on