Oh this sweet boy. I can’t believe he’s going to be 2 soon. 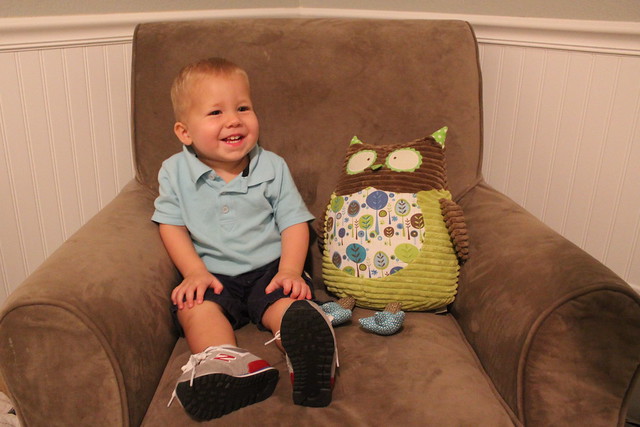 Crosby’s vocabulary has exploded this month and I don’t expect that to slow down, especially since he’s started in a new class this week. He loves talking about cars, trucks, choo choos, and diggers the most, but he will really repeat any word you say. He can name most of the trucks in the Slide and Find – Trucks book, including tow truck, fire truck, and garbage truck. It really comes out as “cruck” which is really cute. All other trucks are “big crucks”. He also loves Little Blue Truck and Where Do Diggers Sleep at Night? Both of which are mommy’s favorite books too. His other true love is choo choos… he cannot get enough of them. He loves his Lego train at home and each morning at school he’s gone straight to the basket with the trains inside and pulls out the Thomas trains. He doesn’t know they are Thomas, they are just “choo choos” to him. He will also yell “all aboard!” when he talks about his choo choos too. We may have already gotten him his birthday present and are already so excited to give it to him just knowing how much he’s going to love it.

Crosby is a lover for sure. On Monday when his friend arrived at school, Crosby dropped everything and walked over to him and said “Hi Huck!” and embraced him in a big hug. Multiple people said it was the cutest thing ever and it doesn’t surprise me in the least. He loves hugging, kissing, and cuddling. After we have finished our three bedtime books, he will turn to wrap his arms around my neck and lay his head on my shoulder. I’m sure he knows that this is the best way to delay bedtime, but we’ll cuddle for a few minutes before he turns out the light for bedtime. We also get frequent reports that he does a great job sharing. He will give his friends toys as soon as they arrive to class. He’s our little sweet boy for sure. 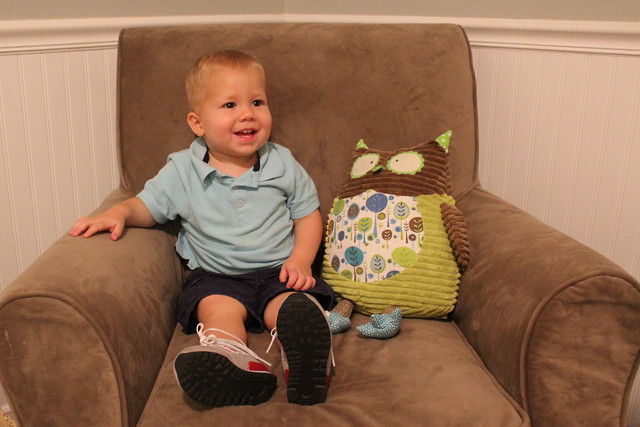 He is still doing a great job eating and will try almost anything. He still really doesn’t like bananas and every once in a while he won’t eat much for dinner, but that’s not the norm. He’s starting to use his fork and spoon regularly and while he still uses a sippy or straw cup, he can drink out of a regular cup while under supervision. Just like his sister, he does really well when we stick to a routine. He does a great job going to bed and rarely makes a peep from his crib after he goes down. I can tell he’s been worn out this week because he’s gone to bed around 7:15pm each night and has slept soundly until around 6:45am.

Twenty-two month notes:
Weight – I have no clue, which means we haven’t seen the doctor lately, yay!
Hair – Now that it’s a little shorter, it’s lightened up.
Teeth – 16
Eyes – Brown
Clothes – 2T; size 6 or 7 shoes
Diapers – Cloth diapers by day, disposables by night, size 4
Likes – Playing with the Magformers, doing puzzles, reading books, any automobile or construction vehicle, saying “rawr”, doing anything and everything his sister does, climbing up and down the stairs, running, giving hugs and kisses, Lego Duplos, trying to play with Kenley’s little Legos, putting anything in his mouth, Play-Doh, swimming and jumping in the pool,
Dislikes – Getting his diaper or clothes changed, when he doesn’t have his milk at dinner, the dinosaur skeletons at the Orlando Science Center