One more month and this boy is two years old. I cannot even believe it. 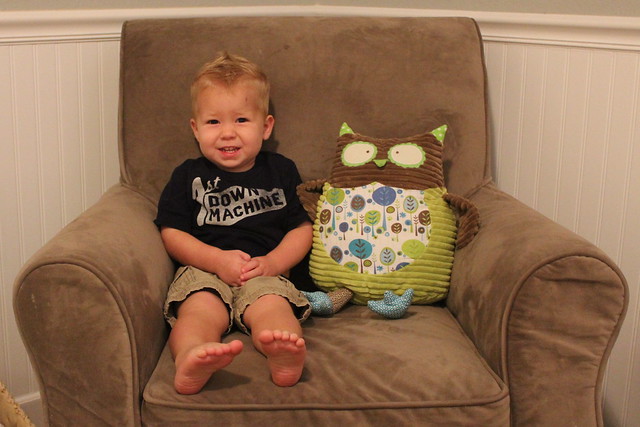 It’s funny how at this age Kenley was all about saying “yeah” because Crosby is all about saying “yes”. At times it seems like he says it with a little bit of a lisp, but whenever you ask him a question the answer is always an emphatic “yes!”. That’s not to say he doesn’t give us our fair share of “no” whenever he doesn’t want to do something, but more times than not, it’s “yes”. 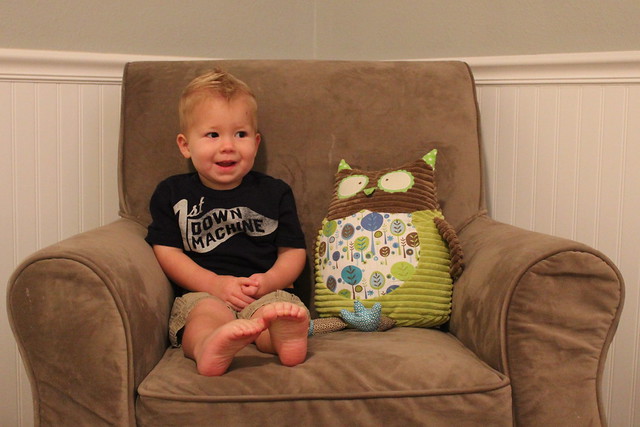 Crosby has been learning so much in his new class. He can count to 10, but counts to 5 more frequently. He loves singing and his favorites are Old MacDonald, Twinkle Twinkle Little Star, and Head, Shoulders, Knees and Toes, but his all time favorite is Wheels on the Bus. If you start singing any other song, he will say “wheel bus!!!!” until you start singing that song. He is quite the little parrot and will repeat anything you say. He’s also starting to speak in sentences. While he was home sick this week, Greg took him to get a treat and after one bite he said “I like it, Daddy”. I almost didn’t believe Greg when he told me. The one thing that he still needs to work on is his colors. He rarely gets one right and he’s usually all over the board. This week everything is green, even if you tell him five times what the color is, he is still adamant it’s green. I am starting to think he may be colorblind, but Greg thinks he does it because he thinks it’s funny. 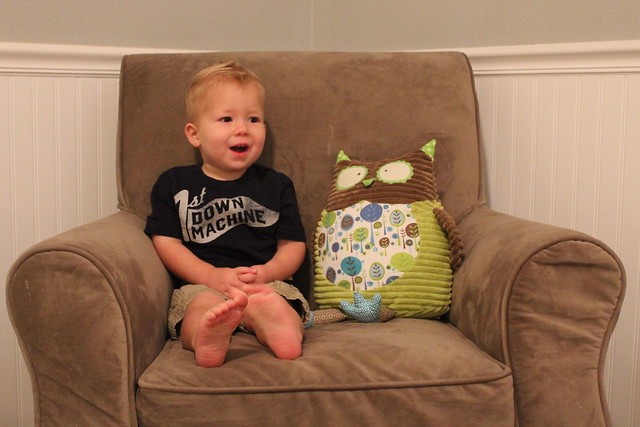 By far the cutest thing that has happened this month is that Crosby started using a pillow and he loves it. He’s still in his crib so we hadn’t really thought about giving him a pillow until he had a cough and we thought he could benefit from being elevated. It turns out that we should have done it a while ago. He sleeps on it most of the night which is surprising since he usually is ALL over his crib throughout the night. We keep talking about when we’ll move him to a toddler bed, but we really don’t know yet. It’s crazy to think that Kenley has been in a toddler bed since she was 18 months old.

One thing that Crosby is a little ahead of Kenley on at this age is his interest in the potty. He has gone on the potty a couple of times (mostly because Greg rushed him in there just at the right time), but he is all about it. He likes to sit on the potty (again, another one of those questions he will usually answer “yes” to); and he LOVES flushing the toilet. He would do it all day if we would let him. He currently has a little potty in Kenley’s bathroom, but isn’t afraid to sit on the big potty either. We’ll see how it progresses over the next couple of months. 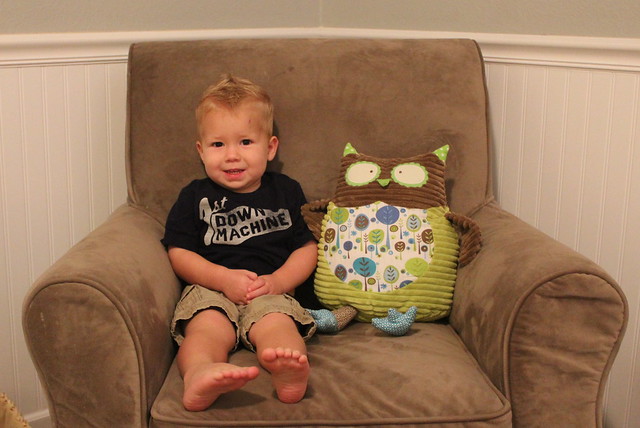 Twenty-three month notes:
Weight – About 27 pounds (I spoke too soon last month with the no doctor comment, we’ve been three times in the last week)
Hair – It’s hard getting a successful haircut at this age.
Teeth – 16
Eyes – Brown
Clothes – 2T; size 7 shoes; some 3T pajamas
Diapers – Cloth diapers by day, disposables by night, size 5
Likes – Jake and the Neverland Pirates and the Jake Duplo Legos, Magformers, books, puzzles, flushing the toilet, running around the house with Kenley, standing on the couch, Mickey Mouse, bath time, swimming, the Little People school bus and airplane, dumping his toys out everywhere, coloring, singing songs, giving hugs, sharing toys with his friends, putting shoes on, repeating everything you say, using a spoon.
Dislikes – Getting his diaper or clothes changed, having his nose wiped.