I cannot believe it has been a month since C man turned two. These months are just flying by. Crosby still says that he “be three” when you ask him how old he is, but he sure is acting like a two year old. It was like a flip of a switch when he turned two how it was so apparent that he is, in fact, two years old. He has been very vocal about what he wants and when he wants it. There was about a week or so that he just flat out refused to nap at school and would tell his teachers “no”. He was napping and sleeping great at home, so my only explanation to them about his behavior was “he’s two”. Thankfully, that has passed and they changed up a few things at school that apparently did the trick. 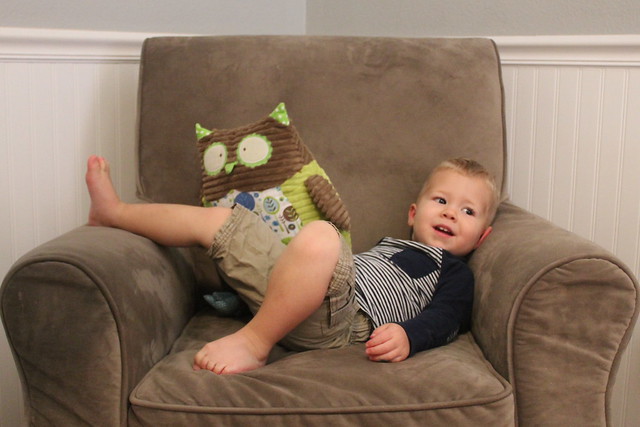 He is quite the talking machine right now. I know I have said that before, but his doctor was really impressed at his vocabulary during his two year check up. To think there was a time I was concerned that he wasn’t talking is pretty funny now. He is repeating everything and LOVES to do what Kenley is doing and saying. She is really big into trying to sound out words now, so I am convinced she is going to teach him all of his letter sounds, just by him repeating what she is doing. He can recognize a good number of his letters and a few of his numbers. His alphabet is getting better and more clear and he can count to 10 (and sometimes to 12). 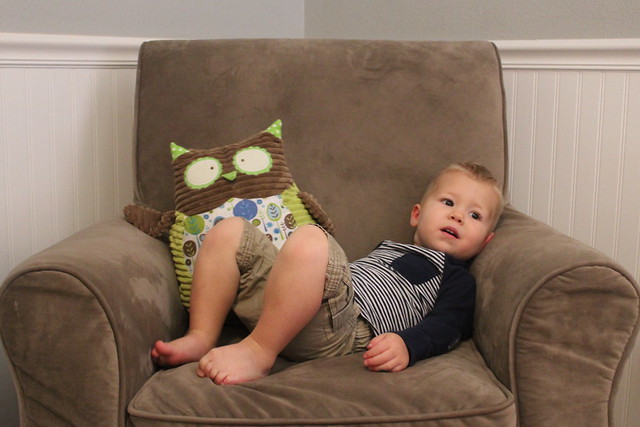 The biggest change this month has been the big switch to the toddler bed. There have been a couple of times where I had to go into his room to make sure he wasn’t climbing out of his crib and our doctor thought it was a good time to do it because of his height and he saw him climbing on anything and everything in his appointment. To be honest, with the number of things he climbs and scales in our house, Greg and I are both shocked that he never climbed out of his crib. We figured that with him napping so horribly at school it may just be a good time to make the transition. We decided on last weekend since this was a short week at school and then a long weekend at home. Crosby got Kenley’s toddler bed while Kenley got a new bed too. We converted the crib into a full bed, which seems ginormous in her room. Six days in, the transition has been okay, and for fear of jinxing anything, that is all I will say. I will have a full report for you next month. 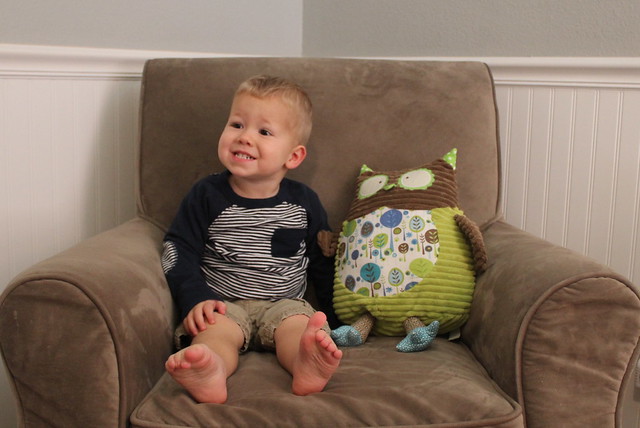 25 months notes:
Weight – Right around 30 pounds I’m guessing
Hair – Light brown
Teeth – 16, but working on his two year molars
Eyes – Brown
Clothes – 2T clothes, some 3T pajamas, and size 7 shoes
Diapers – Size 5 disposables
Likes – He is obsessed with his train table and his choo choos and will play them for hours; construction vehicles and naming them when we see them in the car; reading books – Frosty the Snowman is the current favorite; his new bed; playing with cars and trucks; getting into things he shouldn’t be getting into; climbing everything; going into the pantry and coming out with the crackers container (no matter where we hide it); Jake and the Neverland Pirates; Mickey Mouse; running; doing whatever Kenley does; the park and playground; stickers.
Dislikes – Laying on the changing table, getting into trouble, not getting his way, Thanksgiving dinner, smiling for a picture, wearing a jacket.