The months keep flying by and C man is getting further into the trying twos. We are working on following directions and having good listening ears, but sometimes it is a challenge. He knows how to test his limits and likes to see how far he can get…which usually gets him a timeout.

Crosby is a funny little nugget. Any noise that he hears in the house he asks “what’s that?” then follows it up with “maybe….it’s a bus?!” or “maybe…it’s a train?!” He loves to wrestle with daddy and play “get me” which is basically just wanting someone to chase him. Kenley has called this “get me” for years, so I think it’s sticking. Like Kenley, he is fast! He still loves to climb everything, even the things he’s not supposed to, and he also loves to jump off of said things. He’s a little daredevil. He has been practicing with his balance bike and is getting pretty good at it. He really likes riding it, but in short increments. 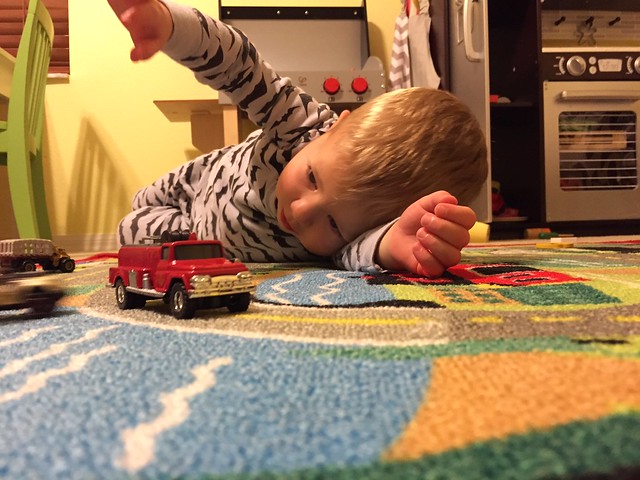 To say he loves cars is an understatement. I have been trying to take as many pictures of his “signature position” as possible because I’m not sure how long it will last. Since the beginning of his car obsession, he has laid on the floor like this with his arm out. He’s completely oblivious to the world around him in these moments, focusing on rolling the cars (or any vehicle) back and forth. 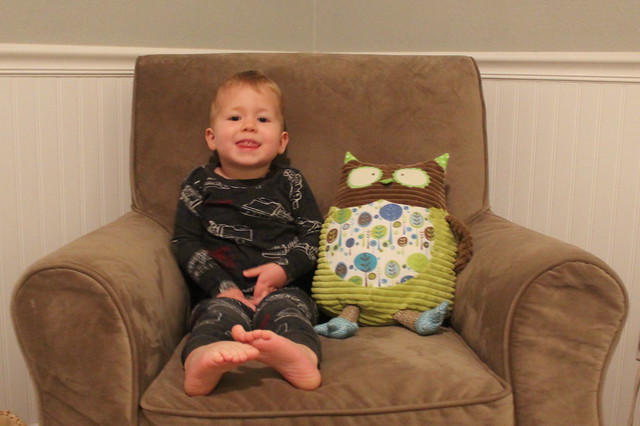 Crosby is a great eater. He has been doing very well with his utensils, though he needs reminded to actually use them from time to time. He loves quesadillas, chicken nuggets, pears, grapes, cuties, pancakes, waffles, crackers, cheeseburgers, green beans, black beans, cheese, and he loves to dip it all in ranch. I’m only half kidding, he will dip anything in ranch if you let him. He loves the yogurt ranch, but doesn’t discriminate against the regular ranch if it’s the only option. There isn’t much he doesn’t like, but he still isn’t a fan of bananas and he doesn’t really like peanut butter either. I think both of these things will grow on him in time. 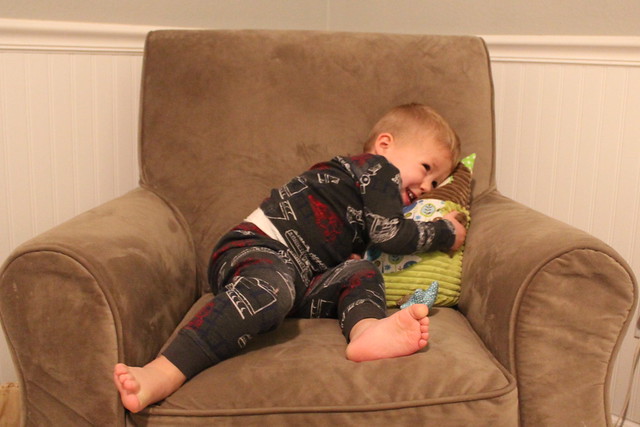 Our biggest struggle right now is bedtime. Crosby will have a few good nights in a row, maybe even a week, but he regresses big time when he gets sick. Unfortunately, for the last couple of months, he’s had a fever every couple of weeks. It feels like we are starting over with the bedtime shenanigans each time this happens. Case in point, he was at the doctor on Tuesday this week with a fever and fluid in his ear. Since then, he has been super emotional and clingy at bedtime. Today he completely boycotted his nap and chose to read books in his bed the whole time, so he went to bed fairly easily tonight. It’s definitely a work in progress. Once we tackle this, it’s on to the next big task…potty training…which I am sure will negate any progress we have made at bedtime. You can see why I am in no rush to get that started.

28 months notes:
Weight – 33 pounds, thanks to our monthly doctor visits
Hair – Light brown and in need of a haircut!
Teeth – 16, and who knows when those molars will get here.
Eyes – Brown
Clothes – 2T clothes, some 3T pajamas, and size 8 shoes
Diapers – Size 5 disposables during the day, size 6 at night
Likes – Climbing; running, jumping; riding his balance bike; cars, etc.; Jake & the Neverland Pirates; Mickey Mouse Clubhouse; reading lots and lots of books; boycotting naps; getting an M&M for going to the potty; going to Touch-a-Truck; giving hugs; cuddling; push toys; the water table
Dislikes – Getting dressed each morning; staying in his bed at bedtime; taking medicine; getting timeouts