Last month, we packed up the car and headed down to stay at Grammy’s house for the weekend. I was scheduled to run the Sarasota First Watch half marathon on Sunday so we decided it would be fun to make a weekend out of it. I registered for the race quite a while ago when they had their registration blitz, so I got a pretty good deal for the race. {Side note: people seem surprised when I say that I had to pay for a race… yes, people actually PAY to go out there and torture themselves. Running can be a very expensive hobby!}

We arrived in Sarasota on Friday night after LOTS of spring break and tourist traffic getting out of Orlando… not one of the best times to live in Central Florida, I tell ya. We made a quick stop at the mall so I could pick up my race bib, shirt, and packet. The packet was a little disappointing, as there was only First Watch coffee inside, no other swag. Bummer! The shirt was super cute though, so that made up for it a little bit. 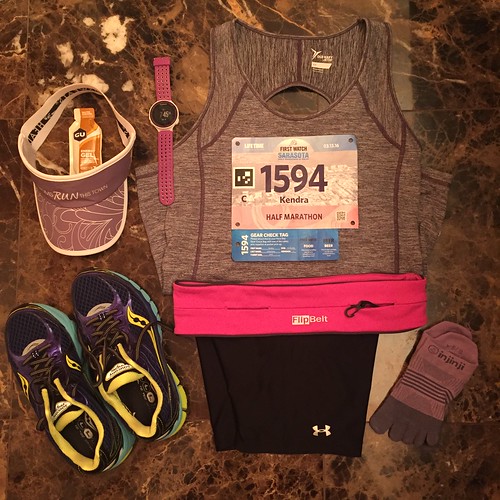 The race fell on the same day as Daylight Savings Time, so we lost an hour of sleep on Saturday night which made Sunday morning come even earlier! I was nervous about my phone changing times, my alarm going off, the kids sleeping okay at Grammy’s house, finding parking, and getting there in time, so I had a pretty restless night of sleep. I ended up getting up and out the door on time, but the traffic was worse than I expected. I had to do a little jog to get the start line and I wasn’t waiting in the corral long before the race started. 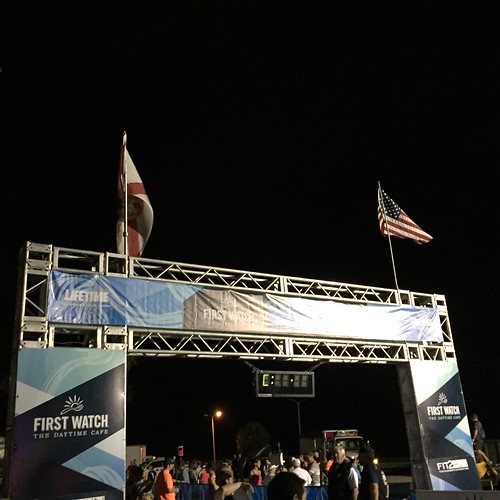 I texted Greg when the race started to try to buy him some time before having to wake the kids up (thank to DST). The race took us down very close to Grammy’s house so they all came to see me just after the 5K marker. It was so good to see them and definitely gave me something to look forward to as I was crossing the monster bridge. I only stopped to chat for about a minute, then it was time to turn around and head back to the bridge. 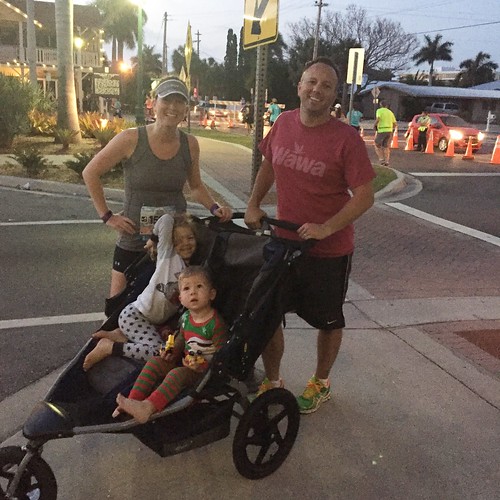 As I was going over the bridge for the second time, the sun was finally coming up (thanks DST). It sure was pretty, but it was already getting hot. 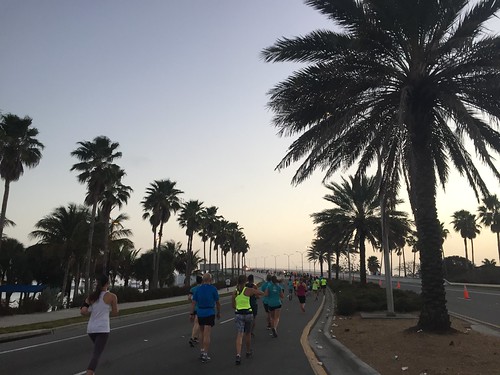 By mile 6, I had run the bridge twice and was ready for the rest of the course, which was flat! We ran down by the water and all the way down to the Ringling Brothers museum. It was a pretty course and there were two parts that were down and back so I was able to people watch and saw several moms from the running group who made the trip down too. 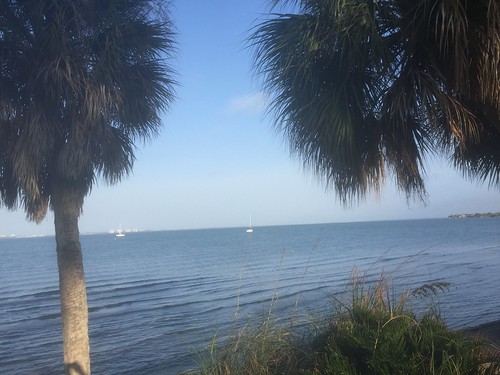 Going into the race, I didn’t have a time goal in mind and knowing that I was going to stop and talk to Greg and the kids, I wanted to go out and just have a fun run. The problem is, once I start the race and the miles keep going by, I think about my pace and time a lot. After the first couple of miles, I knew I wanted to keep each mile under 11 minutes. I also dropped intervals so this was my first race since my very first half marathon that I was running straight through. I stopped and walked through the water stops since I wasn’t wearing my Camelbak, but other than that, I was running. 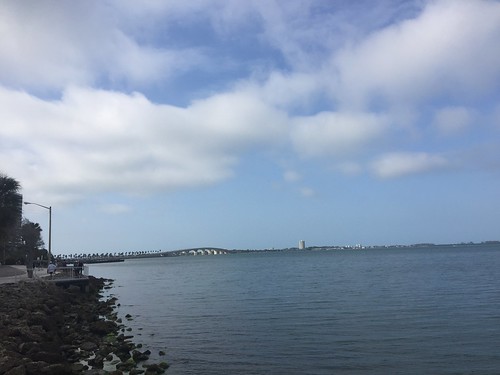 I ended up finishing in 2:18:32 and my Garmin clocked my total moving time at 2:17:29, which is my second best half marathon to date. Considering I ran that bridge twice and this was my first race dropping intervals, I was pretty excited. This was my second best race after my PR run at Space Coast in November. 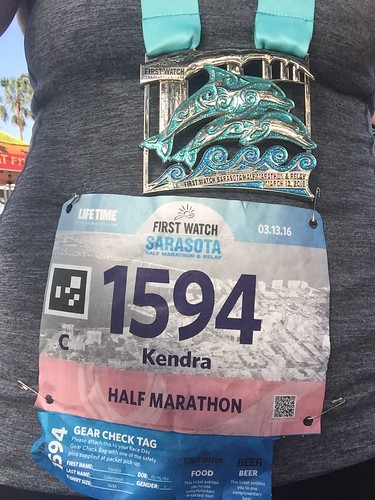 The after party was great. I wish it wasn’t so hot or I would have indulged in more of the yummy breakfast food that was provided by First Watch, but nothing but oranges sounded good to me. Except the cold beer, of course. 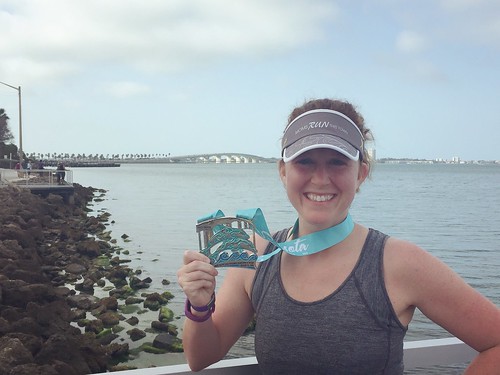 Two other great things about this race: the huge bling and the free race photos. 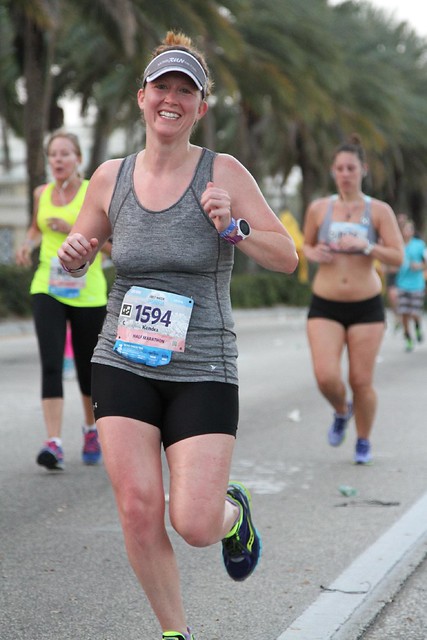 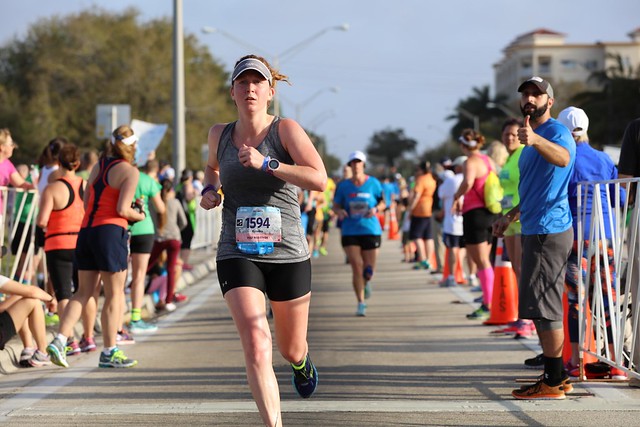 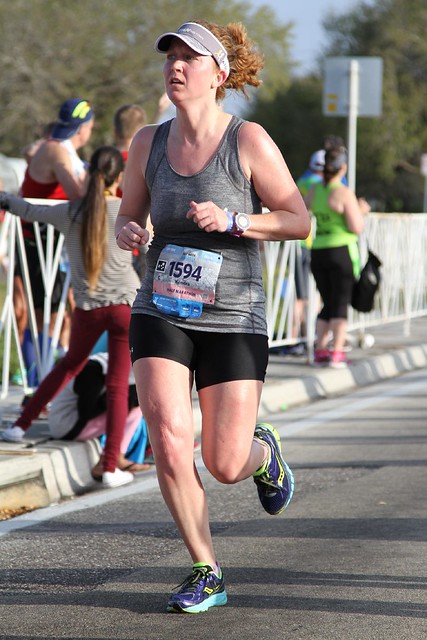 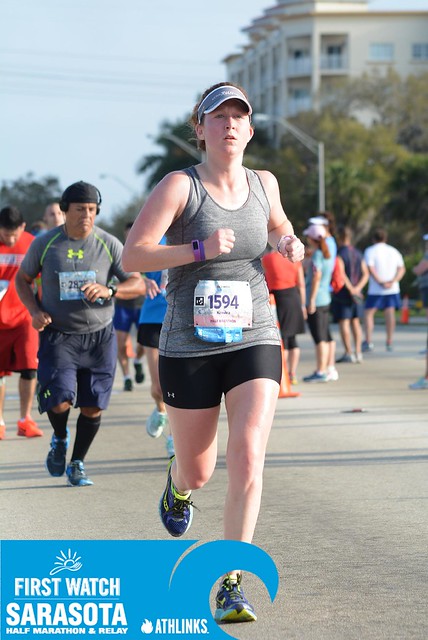 I have now completed 10 half marathons! Sarasota is definitely one of the best races I’ve run and I am already signed up for the 2017 race!