In February 2015, we had our landscaper come out to clear away the existing trees, bushes, and pavers that were there when we purchased the house. He was going to reuse them on other projects which was better than having someone else simply demolish the backyard and not save anything. 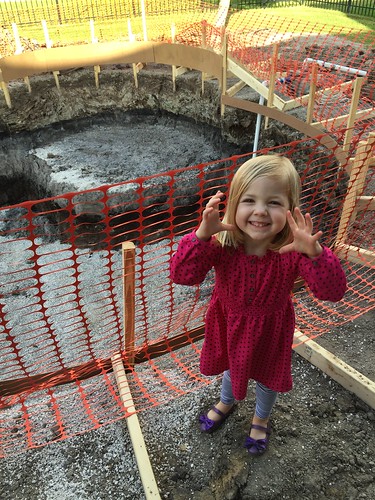 The work on the pool officially began in March. The initial progress at first was very deceiving. A lot of different things happened in the first few weeks that led us to believe that the pool was going to be done in a month…which we knew wasn’t true, but it was exciting to see so much progress so quickly. By mid April, progress had slowed down immensely. There were many moving parts and many different entities that had to come out for their respective jobs, such as plumbing, tiling, paving, etc. Towards the end, we would see progress for a few straight days, then nothing would happen for a few more days. Once we got into May, the entire backyard was starting to take shape and we were just excited to be able to envision the end product.

While we’ve been enjoying the pool, we’ve also been making our outdoor space a little bit more cozy. We spend a lot of time out there, so want to keep it nice and functional.

Throughout the process, Greg took a picture every time there was progress made on the pool, which you can see in the video clip or you can view the entire album. We also have another miscellaneous album of more detailed pictures of the progress.

We’re ready to jump in to another fun summer!