Crosby is 32 months today and quickly becoming a little boy well on his way to three years old. Where did my baby go? In the last couple of months he has changed so much.

For starters, he is completely potty trained. I mentioned in his last update that we had just started the three day potty training method with him and he was doing well. To be honest, he completely surprised us! “They” say boys are harder to potty train than girls but that is completely untrue. I don’t know the reason but I honestly think he did better than Kenley did. He was back at school on day 4 of potty training and hasn’t worn a diaper or a pull-up since we began the process, both day and night. That’s not to say he didn’t have some accidents both at school and during the night, but we rarely worry about him now. He does a great job of telling us when he needs to go. We (mostly Greg) will take him potty in the middle of the night and he will go most nights without a fuss. We are so proud of him! His teacher also commented on what a big boy he has become since he has been using the potty. It’s like he flipped a switched and has lost all of the toddler in him. His communication has really improved too. Aside from his occasional overly excited stutter, he is speaking more and more clearly, as well as holding actual conversations. A lot of our deep conversations come while he is going poopy before bed. He says the funniest things! 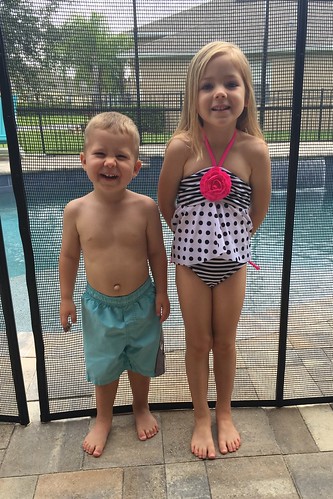 Earlier this month, school ended and he transitioned out of his toddler classroom and into his summer camp room. He’s had two weeks of summer camp and they have been great weeks. It’s always hard to gauge how the transition will go but he’s done very well, especially considering that a couple of his friends were moved up to preschool, so he has a lot of new faces in his current classroom. 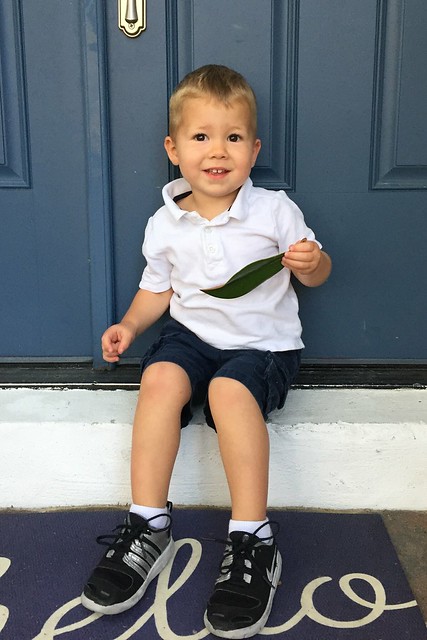 He has very specific interests right now. He loves sharks and he LOVES A Hole in the Bottom of the Sea. He was introduced to the video at school and asks to watch it every single day when he arrives to school. He loves singing the song and he loves the shark in it. He will carry around his stuffed shark that he sleeps with and make it “swim” through the air while he sings.  He also loves his Nemo fish and will typically sleep with him too.

Crosby now sleeps in a twin bed and we are officially done with our toddler bed. His new bed is shaped like a boat and we’ve had it since he was a baby, so Greg and I were equally as excited to move him into it. We rearranged his room since the bed is so much bigger and it looks so great. I will post updated pictures of his room soon. He does a good job sleeping, but it takes him a while to wind down at the end of the day. There have been a couple nights over the past few weeks where he has gone to sleep later than Kenley. Thankfully, he will sleep until 7am or after if he stays up later than normal, whereas Kenley gets up at 6:30am no matter what time she goes to sleep. I have a feeling he will be done napping when Kenley is done napping, which I hope is not for another year! 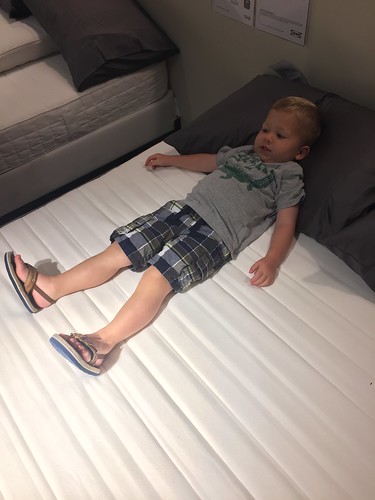 32 months notes:
Weight – 32-33 pounds, if I had to guess
Hair – Light brown with a fresh new cut this week
Teeth – I think all of his molars are in for a full set of 20
Eyes – Brown
Clothes – Mostly 2T clothes, some 3T pajamas, and size 8 or 9 shoes
Diapers – No more diapers! Size 2T/3T undies!
Likes – The usual suspects: cars, trains, planes, garbage trucks, construction vehicles; jumping on the trampoline, as well as the couch; swimming; Finding Dory; PJ Masks; playing, as well as arguing, with Kenley; playing the Lego Juniors app; singing Baby Shark and Old MacDonald; reading, especially Little Blue Truck Leads The Way; playing with Legos, cars, and trains; making mommy, daddy, and Kenley laugh
Dislikes – Seeing mommy and daddy upset with him or sad, staying in his bed & hot stoves.