For the second Thanksgiving weekend in a row, I ran the Space Coast Half Marathon in Cocoa. As I mentioned after the race last year, registration for the race opens in February and this year the race was full in less than 5 minutes. I was so thankful to get into the race for the second year in a row. Leading up to the race, I was really looking forward to it. It has been one of my favorite races, especially after I unexpectedly broke 2:15 last year. Since I set a new unintentional PR in October at Lighthouse Loop, I really wanted to go out and run a sub-2:10 race.

We loaded up the family on Saturday to head over to the expo and check in to the hotel. I thought it would be a fun night away for us all and Greg and the kids could meet me after the race on Sunday. We picked up our packets and stopped into the Florida Brewing Company for a pre-race beer before we carb loaded at an Italian restaurant. 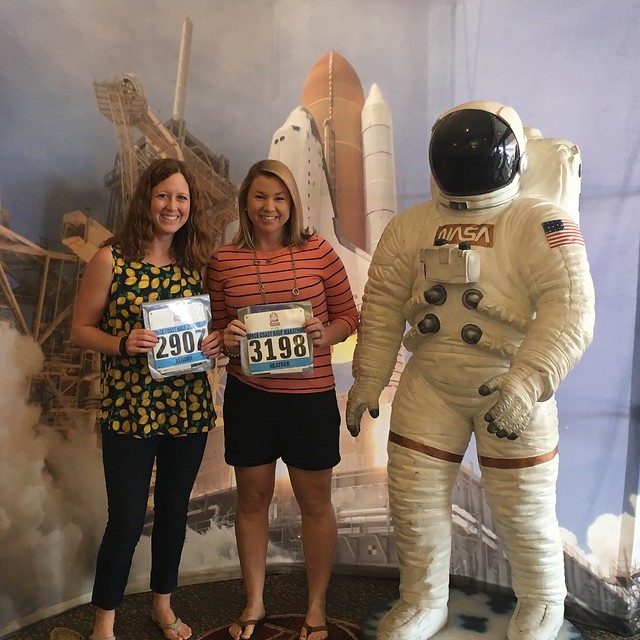 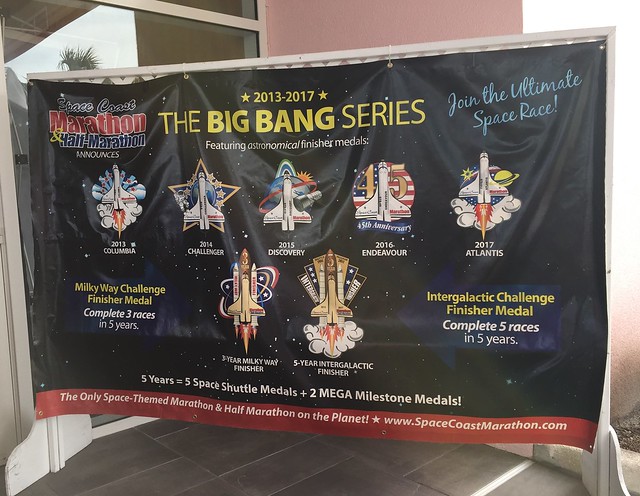 We had a nice little set up in our hotel room and I slept on the pull out couch so I wouldn’t wake everyone when my alarm went off at 4:30am. The temps were supposed to be in the 60’s and I debated wearing my new long sleeve shirt (just because I love it), but I am so thankful that I decided against it. I definitely did not need it. 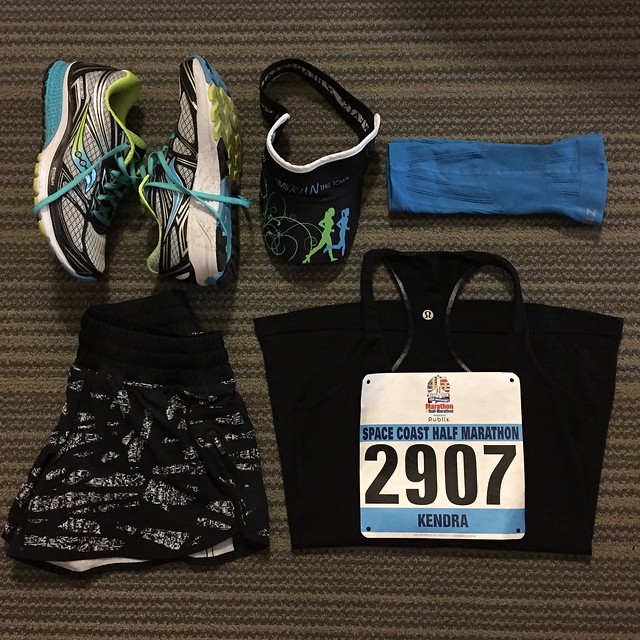 Heather and I left the boys and the kids at the hotel and drove over to the start of the race around 5am. We met up with the other MRTT mamas and chatted before it was time to head to the start line. Michelle offered to pace us on our way to a 2:10 finish time. She casually mentioned at the start line that we were going to bust it from the very beginning and not worry about conserving energy. She said that mile 10 sucks regardless, so there is no sense in saving energy. I’m glad I didn’t know that was the plan all along, but I rolled with it. 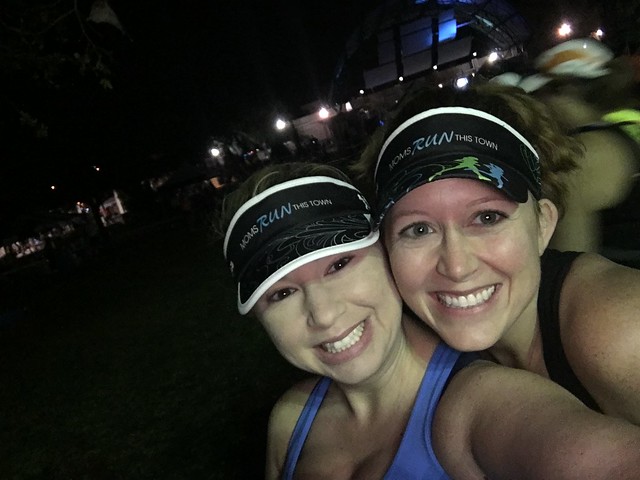 The race started and we were off. I knew our first mile would be slower just because of the congestion on the race course at the beginning. I thought for sure it would be over 10 minutes, but when I saw 9:49 at the one mile marker, I was determined to keep every mile under 10 minutes. We stopped for a quick walk around mile three where Heather dropped back a little bit. Michelle and I continued and stopped for another quick walk around mile 5 to fuel. I took an applesauce pouch which is what I have been training with for the past few months. I made the mistake at Lighthouse Loop of taking a GU instead, so I made sure to switch back to applesauce for this race.

After our fuel break, we started to see some familiar faces of runners who were coming back on the other side of the course. This out and back course is one of my favorites as it makes for great people watching. It’s also great seeing the smiling faces of friends too for some extra encouragement. We kept on trucking and turned around just after the 7 mile marker. Around mile 8, we made a decision that we would turn on Michelle’s music at mile 10 so that was something to look forward to.

Mile 10. I hate mile 10. It’s such a tease because you’ve reached double digits and you know that you’ve come so far, but you still have 3 more miles to go! Miles 10 through 13 were not great for me. I did my fair share of moaning and groaning and poor Michelle had to listen to me do it. She was happy as a clam and was feeling great being the DJ for those three miles. I was not feeling great, but I also was determined to not stop even though I wanted to so badly. By this time, we had already talked about going for a finish time of 2:05. At some point between miles 11 and 13, I told Michelle to go ahead of me. She said no, so on we went. 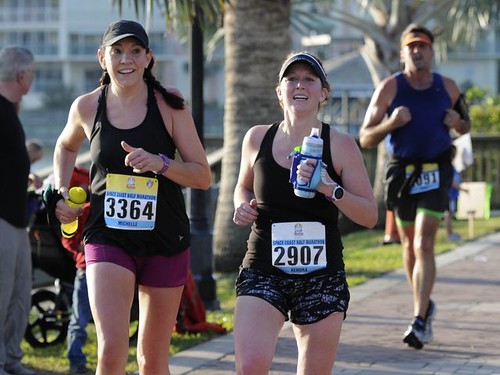 We finally crossed the finish line with a time of 2:04.48, just under our 2:05 goal and absolutely crushing my 2:13.19 PR just a few weeks before. I could not believe it. I immediately stopped to catch my breath and compose myself before getting my medal and beach towel. A volunteer came over to make sure I was okay, so I think I was looking rough at that point. 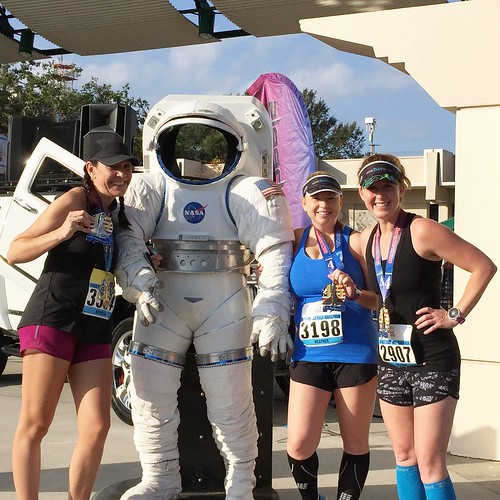 Finally, it was time to celebrate! I met up with Greg and the kids and we saw Heather cross the finish line. This race has a great after party, so I was definitely looking forward to relaxing and chatting with the other mamas. I laid out my beach towel and ate some breakfast and didn’t want to move. 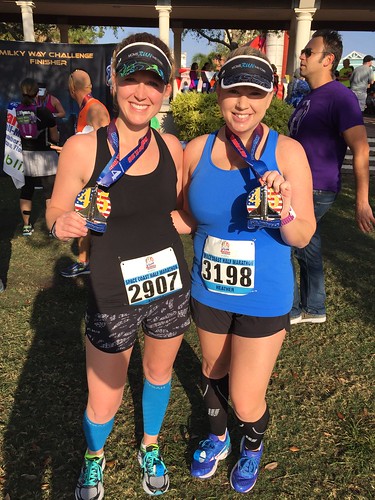 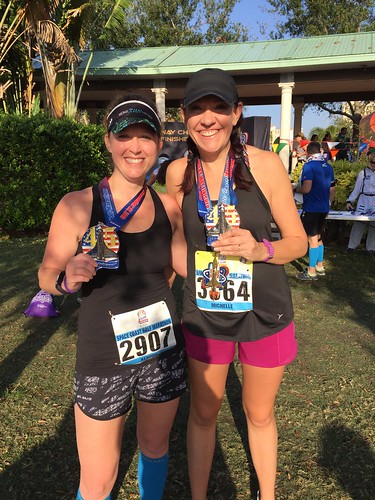 I am so thankful that Michelle was running with me to push me during those last three miles until the very end. There were so many times that I could have stopped to walk but didn’t. This was the most mentally challenging race for me and I definitely could not have done it without her. 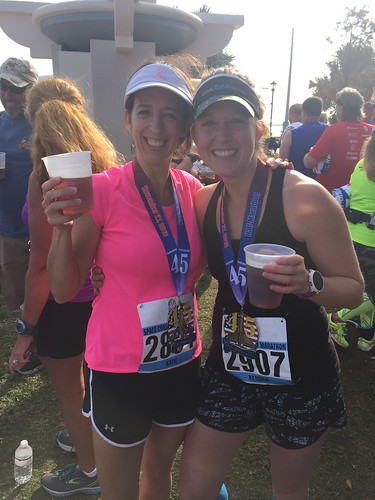 I was also so happy to run into Katie again this year and catch up with her! I was looking for her during and after the race and finally saw her as we were getting our beers. 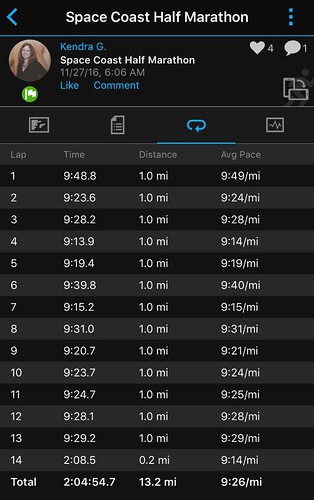 I successfully ran the whole race with each mile under 10 minutes, even on the miles that we stopped for a quick walk. The adrenaline wasn’t pumping like it was towards the end of the race last year. It was a struggle, mentally and physically, and I immediately regretted carrying my water bottle the whole race. However, I am so happy that I pushed to the finish. Seeing 2:04 on the clock as I crossed the finish line was worth it… as well as the days of soreness that followed.

Now, I hope I can get into the race next year to earn my 3 year Milky Way medal!