On March 11th, I ran the 40th Gate River Run 15k in Jacksonville, Florida. Greg and I picked up the kids on Friday afternoon and we headed north. It was our first time in Jacksonville, so I was excited for the kids to stay the night in a hotel and go exploring the next day. We walked over to Jacksonville Landing on Friday night for dinner with the hopes of watching the IU game, but no such luck. We had a good view of the first bridge I would run the next morning. 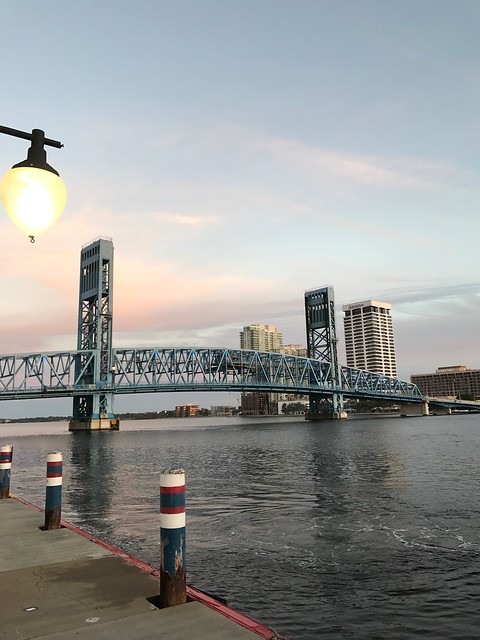 Heather had a good view of the second bridge, the green monster, from her hotel room. Yikes. 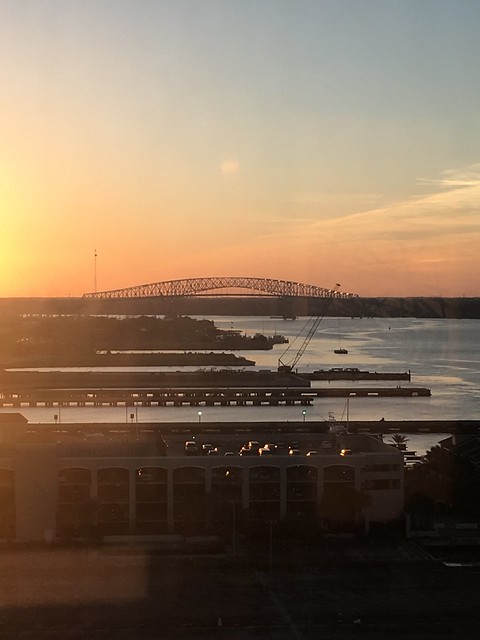 The race didn’t start until 8:30am, so I was looking forward to getting up a little bit later on Saturday morning, but no such luck again. Crosby was up several times in the night and we all were up at 5am when he woke up throwing up. Not the best way to start the morning. I considered just going home right then and there, but Greg told me I needed to run. I headed out to meet Heather and Nathan to walk to the race around 6:30am. Considering what I had left Greg with in the hotel room, I was incredibly anxious and jittery leading up to the race. 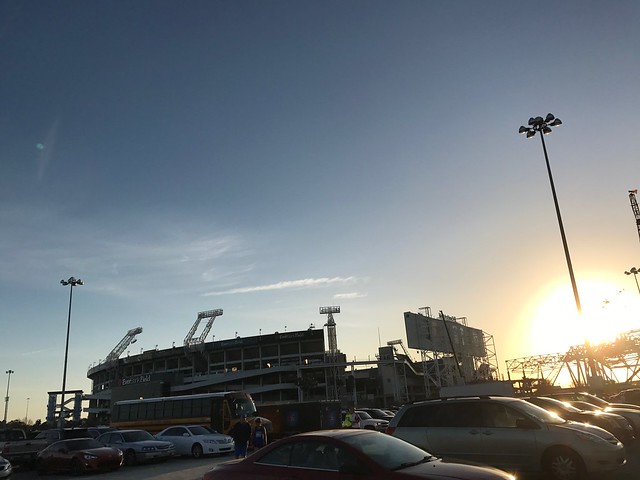 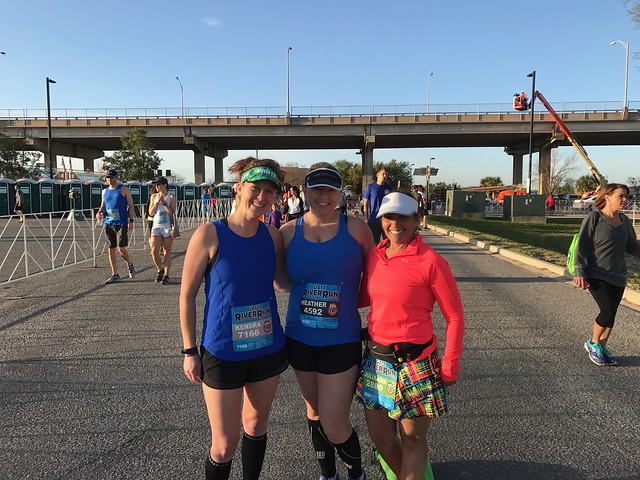 We met up with Juliana at Everbank Field (where the Jacksonville Jaguars play) and waited until it was time to get into our waves. I made a rookie mistake when I signed up for the race and entered the non-seeded division putting me in wave 2. Heather planned on starting with me, but they wouldn’t let her into wave 2 since she was seeded in wave 1. I was bummed, but she ended up waiting to start in wave 2 with me. 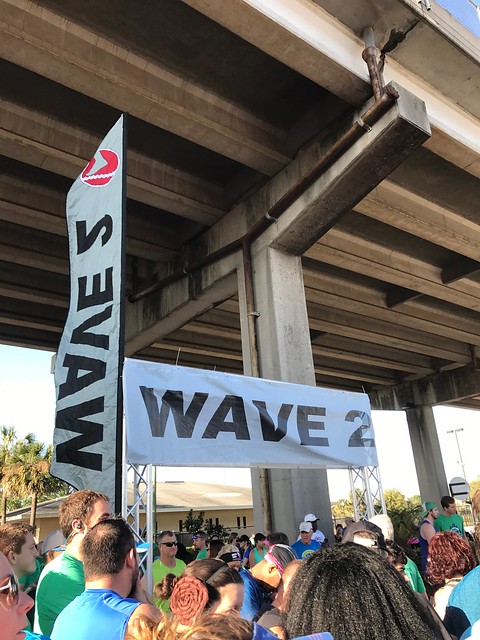 There was a lot of down time since we got to the race super early. I was bouncing around like crazy, still very anxious and nervous. I didn’t know the city or the race route and I kept texting Greg to see how Crosby was. 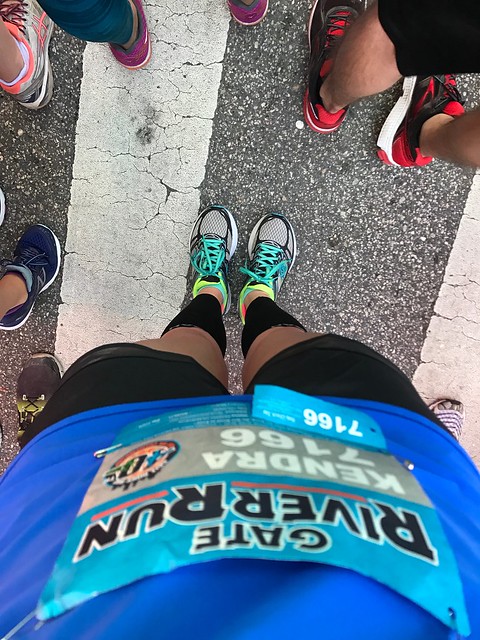 Wave 1 started around 8:30am including the elite runners. The Gate River Run is the largest 15k in the nation so there were tons of professional runners running the race, which was really cool to witness. Wave 2 moved up and we were ready to start. 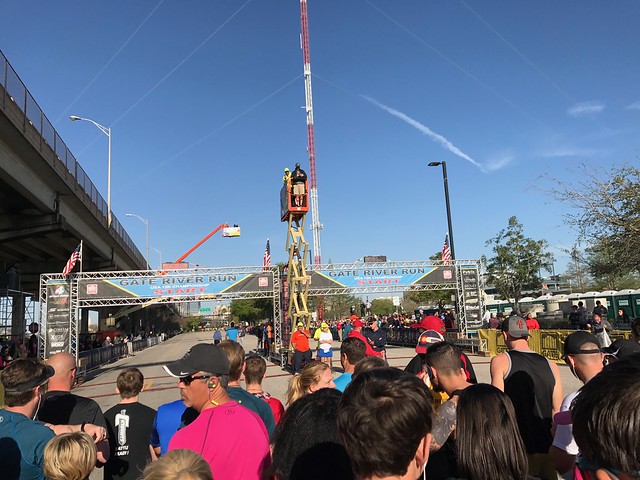 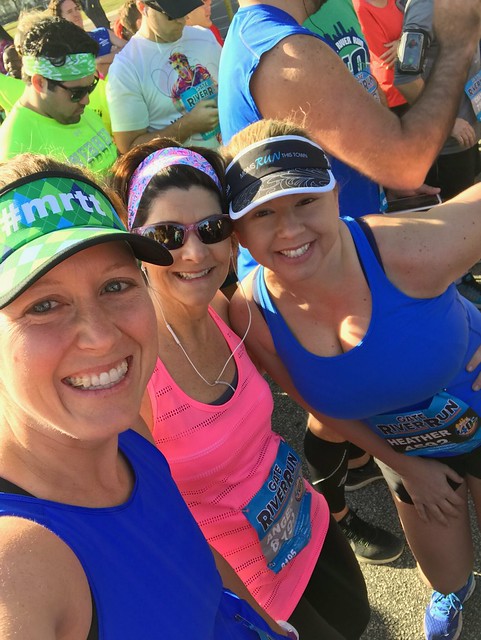 Our first mile was really fast (8:27) but I knew we would slow down a bit moving into the first bridge right after the first mile. I slowly ran up the bridge being careful on the grates of the bridge. We continued on our way and had a solid first 5k before we slowed it down again. The weather was really great when we started but it quickly warmed up. 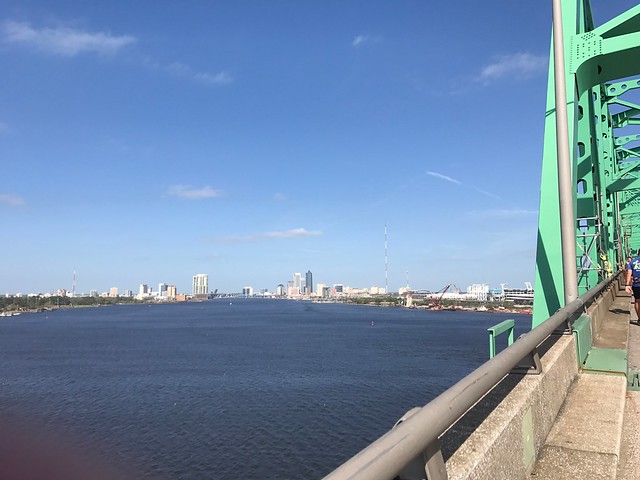 Just after mile 7.5, we headed up towards the green monster. My legs were hurting, but the bridge was so steep that it almost felt better to jog up rather than walk. We found Juliana again while we were towards the top of the bridge, so the three of us made our way down towards the finish. The bridge was just as steep coming down and there was a lot of turns since we were coming down the ramp. We had to wind around the stadium to get to the finish. About .2 miles away from the finish, Heather tripped and fell. It was so scary. The road was packed so as I bent down to help her, Juliana immediately started blocking people from running into us. Another nice gentleman stopped to make sure she was also ok. She was able to get up and finish, thankfully, but she was bleeding from her knees and hands. After all of that, I finished with a 1:39:47 which was a PR! It wasn’t the finish I was hoping for, but I’ll take it.

The end of the race was insane. There were people everywhere and the area around the finish line was so small and tight. We met up with Nathan and Heather headed to the medical tent to get cleaned up. We all skipped the after party, which looked just as insane, and I headed back to the hotel to check on everyone. 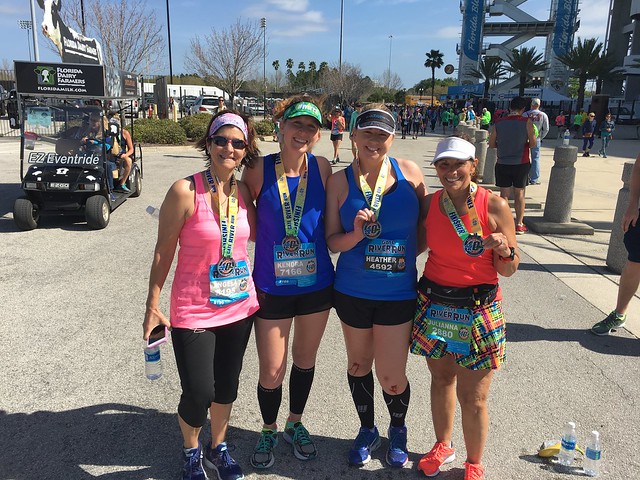 Overall, the race is a really good race, but I wish I was able to enjoy it more. I was worried about Crosby the entire time and then worried about Heather after the race was over. We had hoped to explore St. Augustine on the way home, but Crosby got sick the entire morning, so home we went. Both kids napped the whole way home. By that night, I was so physically, mentally, and emotionally exhausted. It was a long 24 hours. I’m not sure I’ll be back to Jacksonville for the Gate River Run anytime soon, but maybe eventually?