Happy Friday! Don’t forget to hop on over to see what these ladies are loving too!

The MLB went pink on Sunday for Mother’s Day and the Going to Bat Against Breast Cancer program. I love this!

I absolutely love this Baseball American Flag Tee from Gymboree. Depending on what size, it comes in both grey and white. Unfortunately they were out of Crosby’s size (both in store and online), but I ordered him a 3T for next summer. This baseball-loving family couldn’t pass it up! 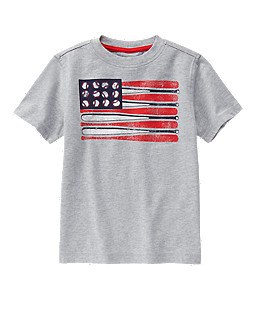 A while ago I ordered a DevaCurl gift set. It was a really good deal on the products I already use and there was a gift with purchase… I couldn’t pass it up to begin with, but it also included the DevaCurl Microfiber Towel. I had read good things about it and I definitely wanted to try it. I used it off and on until recently. For the past week or so I have been using it every day and I have seen such a difference in my hair! It is far less frizzy than it is when I wrap it up in a normal towel and it just feels more healthy. I am seriously in love.

I love the smell of coconut, so as soon as I saw this Yes to Coconut body wash at Target I had to have it. Oh my goodness, it smells absolutely delicious. Now that I’ve looked for it online, it’s apparent a Target exclusive, so the next time you’re there, pick it up. It definitely makes me want to try the other Yes to Coconut products out there.

Your turn! What are you loving this week?

Happy Friday! Here is what I’m loving this week.

This. ALL OF THIS.

Top 10 Signs You Are Living with a Threenager

But for real. It’s ALL TRUE.

I’m a sucker for social media inspired baby clothes. How cute is this like colorblock sweater?

I picked up Benefit Gimme Brow over Christmas break when I was shopping with my mom. It seriously makes a world of difference. Why haven’t I used it until now?!

Here is a helpful tip for bloggers. I’ve experienced several of these emails, mostly in the past month… so this is definitely worth a read!

There really isn’t anything better than knowing we’re going into a three day weekend, especially after a busy week at work. Happy long weekend friends!

Your turn! What are you loving this week?

Don’t forget to head over to see what these ladies are up to as well!
Misha // Mary Beth // Amanda // Laura

I’m also linking up with 5 on Friday with A. Liz Adventrues, Carolina Charm, Hello! Happiness, and The Good Life

If you’re new to these parts, every Friday, Misha and I share some of the things we are loving.
You can catch up on previous weeks here.
We’d love to hear what you’re loving, so leave a comment!

I have been wanting to try They’re Real mascara by Benefit for a while, but I couldn’t get over the price tag.
Over Christmas, my mom and I found that they have a travel size at Ulta for only $10,
so it was the perfect excuse to try it.
Ohmygoodness. It’s wonderful! I’ve been using it off and on for over a month and love it!
As I’m wearing it more, I’m loving it more!
I honestly didn’t know I had so many eyelashes and the wand is awesome.
The only con is that it takes a little more effort to get off at night than some of the other mascaras I use,
but that’s the price you pay. Beauty is pain right?
I’m definitely no beauty expert, so I’d love to hear your opinion. Tried it? Love it? Hate it?

I have been on a roll this week with home organization.
Really, just two small projects, but I feel so accomplished.
I am in the process of actually organizing my digital life (i.e. photos!).
A couple nights this week, I made a real effort to organize and move all of my photos to our external hard drive.
For example, I had all of my (5,000+) iPhone photos in one folder on my lap top,
so I worked to get all of Kenley’s photos into the appropriate month folder on the hard drive.
It’s taken a while and I’m still not done, but I’m getting there. This is something that has been on the back burner for a while. I am making a public declaration now to NOT do this with Crosby’s photos.
At the end of each month, I’m going to sit down and organize my life.

In the same realm, I’m making progress in Crosby’s room.
Since he’s moved in there, I haven’t felt like I’ve been in the flow.
The drawers were overflowing, diapers were never in there when we needed them,
clothes weren’t in the right spots. It’s been driving me crazy.
Somehow, I remembered I had a hanging storage thing and it’s been so helpful!
Finally, I feel like I’m getting somewhere.
I’ll share updates soon.

We’ve been getting into the winter Olympics in the evenings.
I really never thought I would like ice skating so much!
I loved watching Meryl Davis and Charlie White win gold this week.

Don’t you think Meryl should be Jasmine in Disney on Ice?

What are you loving this week?…besides the fact that it’s the weekend!

Five years ago today, I married the love of my life.
I am still amazed by the way God brought this Long Island boy and homegrown Hoosier together.
I am excited to share our special day with you.

All festivities were held at the Hilton Indianapolis Hotel & Suites.
We loved having everything in one place, especially for the many
out of town guests who were new to the area.

The day started bright and early for pictures.
Greg and I had our moment seeing each other before the ceremony
so we could get rolling early and get pictures out of the way.
This allowed us to have more time during cocktail hour to enjoy ourselves and mingle.

We took pictures at various locations in Indianapolis, including the Indianapolis Museum of Art
and the Soldiers & Sailors Monument on Monument Circle, just a block away from the hotel.
The weather turned out to be beautiful, even though I’m sure we both were sweating.

The ceremony was officiated by my pastor growing up and was short & sweet.
Cocktail hour followed, then everyone headed up to the ballroom for the reception.
We ended the night dancing and drinking with our most favorite people in the world.

Since I live my life one semester at time, it is officially FALL in my book.
Bring on the sweaters, football, crunchy leaves, and pumpkin spice everything!
Ok, who am I kidding? It’s still ridiculously hot and we don’t have leaves, just palm fronds.
But, we do love us some pumpkin spice lattes, coffees, and coffee creamers.
If it were up to Greg, he would indulge in pumpkin flavor year round
but I think that defeats the purpose and it would totally kill the excitement.
I digress.
Anywho, I want to give summer one last shout out before we move on to bigger and better things.
I’m pretty sure fall would be my favorite season, if we had seasons in Florida.
I love football season, those perfectly crisp mornings that aren’t too cold but aren’t too hot,
October in general (birthday(s) month, breast cancer awareness, Halloween),
and knowing that the holiday season is right around the corner just leaves me feeling giddy.

Again, back to summer. We had a great one. I have no idea where it went, but it was fun.
Everything I was excited about in this post lived up to its expectations.

We had a great vacation up in Indiana over the 4th of July,
it was great to see family and friends, yet relax at the same time.
You can read more about it here, here, and here.

It’s hard to imagine how different our family vacation will look next July.

I mentioned that I wanted to try some make-up and beauty products, tips, and tricks.
A huge thanks to Rachel for keeping me up to date on what’s out there
because Lord knows I need help in that department.
Some of my new favorites include the Neutrogena Make-up Remover Cleansing Towelettes,
MAC Naked Lunch eye shadow, and Revlon Just Bitten Kissable Balm Stain.

We also got our baseball fix in this summer. Greg hit up a Phillies/Rays game in Philly,
in addition to our trip to St. Pete for a Rays/Red Sox game. Yes, he saw the Rays in two different cities.
Our St. Pete trip could not have worked out any better than it did meeting up with the Campbell/Pena clan
as it was the front end of their family vacay. We had a great time and we got to see some live baseball,
which is a must in our household every summer.

We normally do a lot of year ’round grilling in these parts, but it’s usually the same things week in and week out.
Throughout the summer, we did try a new recipe here and there, but nothing spectacular.
I do a great job of pinning recipes on Pinterest, it’s just the making them part that doesn’t get done.
We’ll chalk that up to a work in progress.

Overall, we had a great summer, but we are definitely looking forward to the fall season.
We have a lot of fun things planned between now and the end of the year,
which brings me to the last thing that we’ve been up to… First birthday party planning.
I mentioned I wanted to get a head start, and I definitely have. I realize that we are still two months out,
but like I said, October is my favorite month and it’s also the busiest. Each year it’s insane.
Therefore, to avoid me running around like a crazy person (even more than I do now), I need to do things in advance.
I am a major planner… I know, I know, shocking, right? and that’s what we’ve been doing,
along with sewing, crafting, hunting (for bargains) and gathering (party supplies).
It’s gonna be fun people. Real fun.

So there ya have it. What we did this summer. How was your summer?