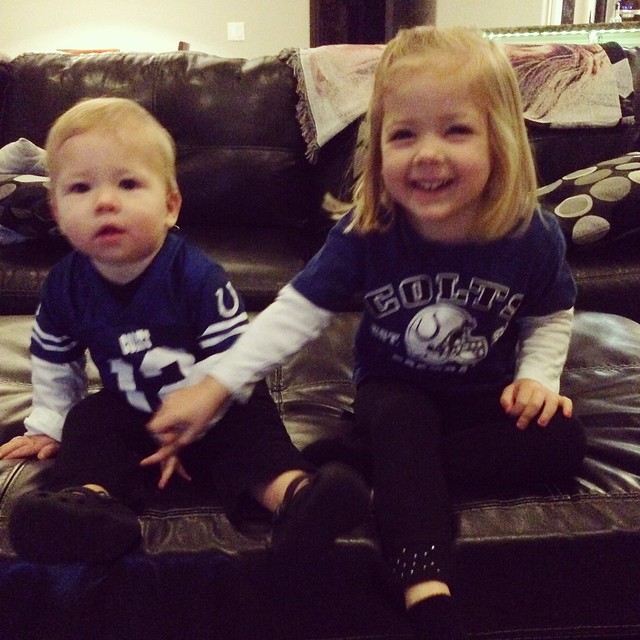 the kids rocked their colts gear for blue friday! 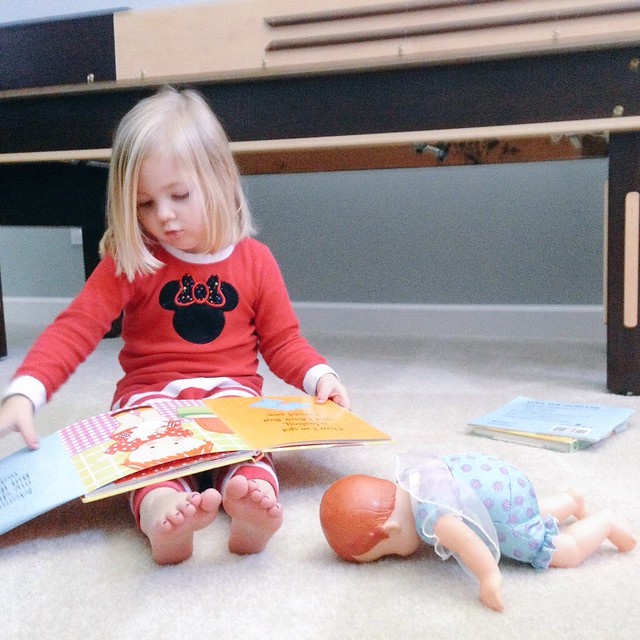 she said “mommy, i’m reading to my baby. she’s sleeping.” 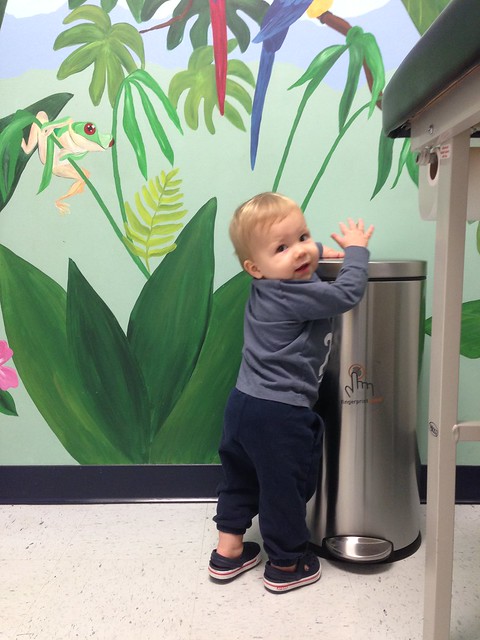 saturday morning we made a quick trip to the doctor. little man just has a cold, which is good! 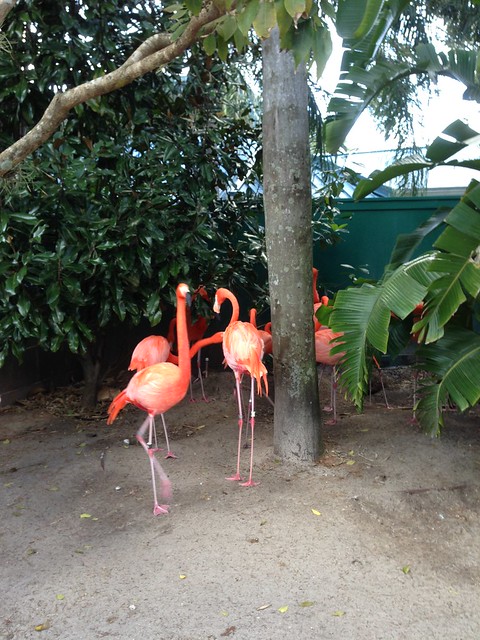 after nap time, we headed down to sea world for a few hours. 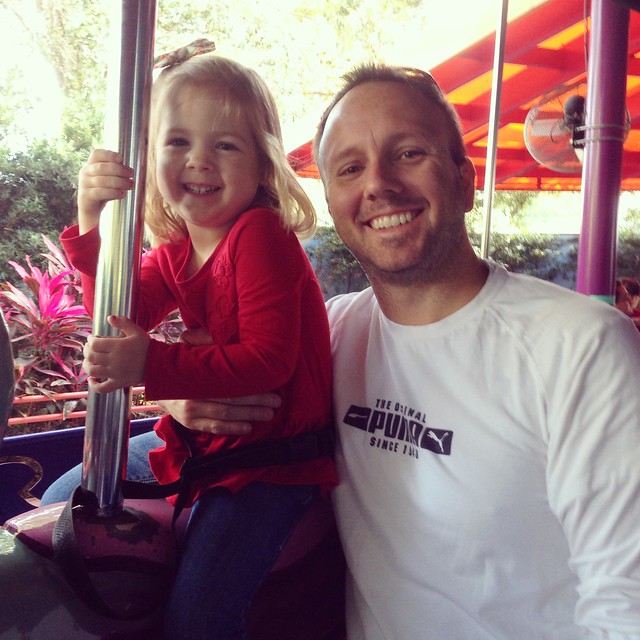 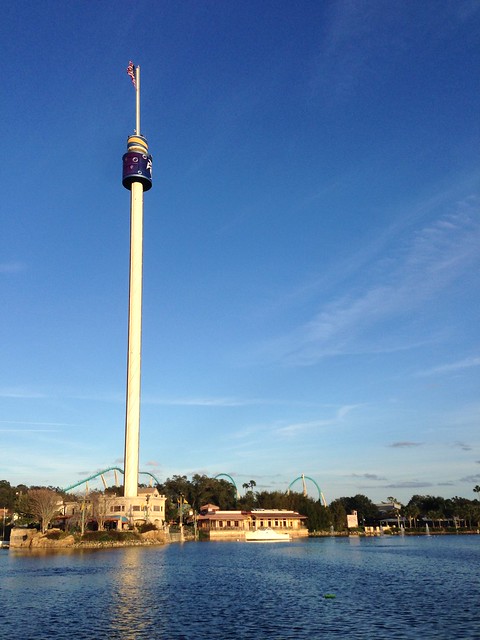 it was a beautiful afternoon! 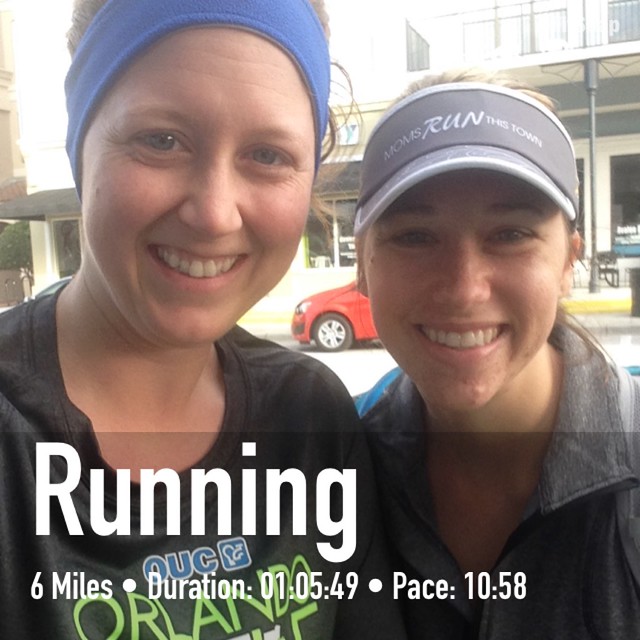 sunday morning, we ran our last long run before our next half marathon!
i also found this sweet app, it’s call fitsnap.

we were all hoping for a colts victory on sunday, but unfortunately, that didn’t happen. 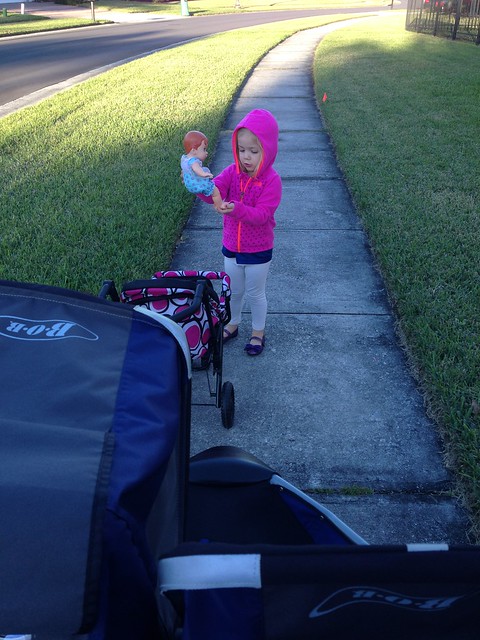 walks around the block with this one take a little bit longer than they should. 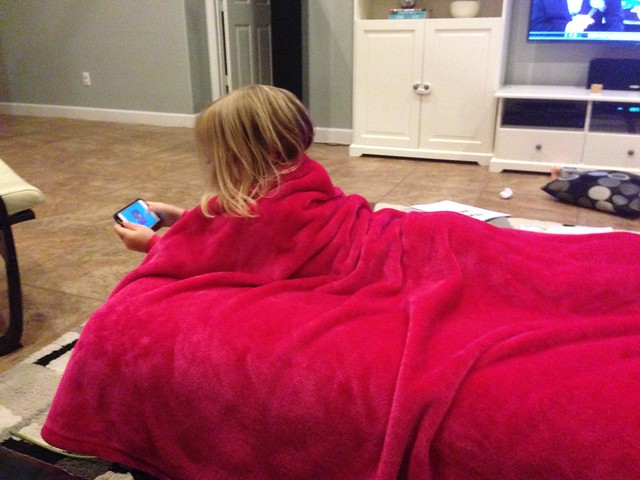 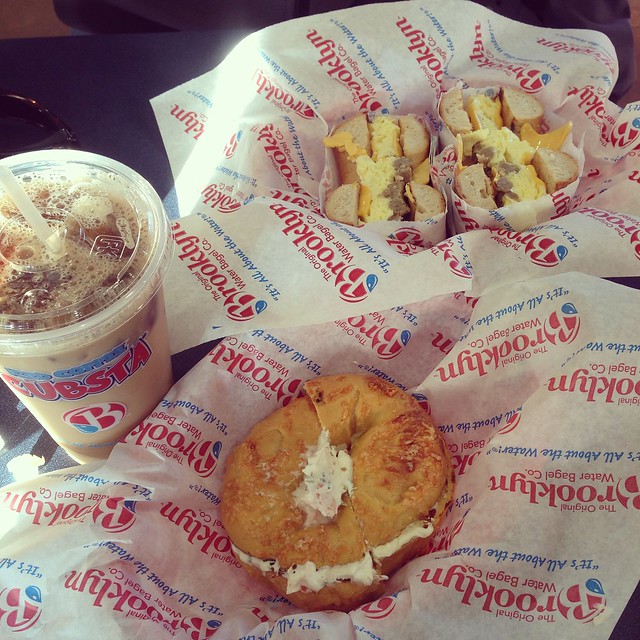 greg and i had the day off today, so our first stop included the best bagels outside of new york city complete with iced coffee (and coffee ice cubes!). 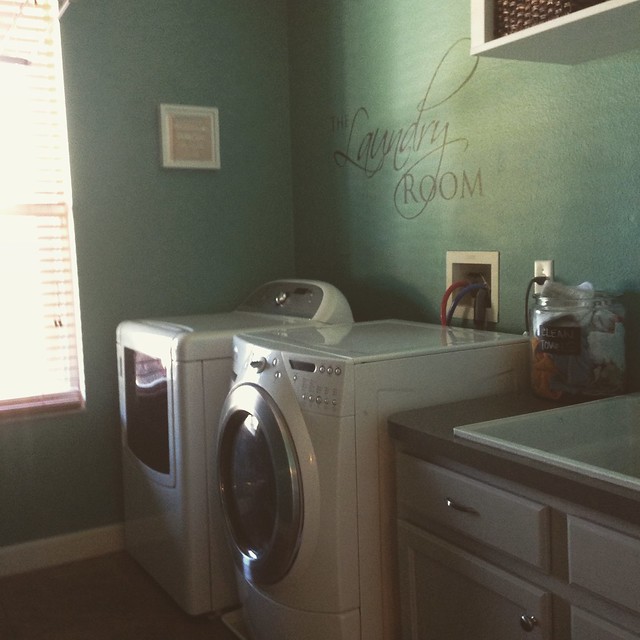 it’s amazing what we got done today. i actually got caught up on laundry! we also saw american sniper which was really good.

we had a great long weekend. it was good mix of getting out of the house, yet laying low at the same time.
how was your weekend?

thursday night we headed down to disney for dinner atop the contemporary hotel.
the food was great and the company was even better.
it was a great way to end christmas break!

i am already starting to work on my word for 2014.
we did absolutely nothing on friday night.
the house was a mess and we had a list of things to do, but we chose to just sit on the couch.
it was awesome.

we ran errands on the other side of town, which happened to be near one of our favorite places for lunch.
jason’s deli! yum!

mr. chubby cheeks and i watched the colts game together.
what a game!

he wasn’t as excited about the sunday games today, watching them with daddy.

we had a good weekend, but it’s back to the grind tomorrow.
i’m back to work and crosby is off to school.
new year, new routine.

friday was a busy day! kenley took munchkins from dunkin donuts
to her class to celebrate her birthday then we picked her up early for a doctor’s appointment.
she was a rockstar.
later in the day, meemaw, grandpa, and grammy arrived!

her actual birthday started out with candles in her pancakes!

she blew out two more candles at her birthday party.
it was big fun!

after the party, the adults played games and relaxed.
greg got this horse racing game for his birthday
after our friends back home introduced it to us last month.
i didn’t last long… it was a long day.

before my amazing prenatal massage, greg and i went to buy buy baby to finish off our gift card.
he was seriously pumped that we upgraded to the lawn (bottle drying rack).
you know where your priorities are in life when those kind of things excite you.

the rest of the day was spent watching football (woohoo redskins!) and getting pumped up for the game tonight.
go colts and welcome home peyton!

just in case you were still wondering…no baby yet. but that’s not to say we’re not ready!

we had such a fun weekend celebrating kenley dee with our family and friends!
i’ll be sharing many more pictures from her birthday party this week.
how was your weekend?

she already knows what to do with the phone

amy and ryan came to play and watch football on saturday

we watched ucf put up a good fight against ohio state
and watched iu win against umass, thanks to espn3

i completed lots of fun, random crafts this weekend between football watching.
mod podge is the greatest thing ever.

excited about being at her favorite store, target.

football on sunday is back. one of us was very pleased with our rookie qb and team today.

after a busy weekend last week, we were happy to lay low this weekend.
what did you do? any fun crafts? did your team win?

kenley played hooky on friday and stayed home from school with grandma,
who decided to come down for a weekend visit at the last minute.

greg and i had lazy moon for lunch!

greg made shrimp scampi for dinner. it was damn good.
i’m one lucky girl, i can tell ya that.

finally fits into her little legacy shirt from aunt carolyn!

ready for football season to start!

we had 4 rivers smokehouse for lunch on saturday, not sure why we waited so long to take my mom there.
it’s the jam.

someone took a nap while we enjoyed our lunch, then she enjoyed hers right after.
couldn’t have worked out better.

we took advantage of grandma being in town and got to have a date night!
a quick stop at joann’s and the dark knight rises. so great.

we were up early today so mom and i headed to target.
it was empty and we aimlessly wandered up and down every aisle.
i can’t tell you the last time i got to do that.
we bought the most random things. it was awesome.

drafting up our dream teams.

It’s a sad day for us Colts fans.

After 14 seasons, Peyton Manning and the Indianapolis Colts have emotionally parted ways.
When Kenley was born, the Colts had not won a game in the 2011 season.
Luckily, we did end up winning two. TWO GAMES. So silly.
Don’t you love how we say “we” like us fans have anything to do with the wins and loses?
Anyway, it was not a pretty season for the Colts without Peyton,
and I assume that the next few seasons will be dubbed as “rebuilding” years.
It’s crazy to think that Kenley will grow up knowing Peyton as the former Colts quarterback
who turned the Colts franchise around, brought us a Super Bowl title (with Dungy’s help of course),
and helped Indy be one of the most successful Super Bowl hosting cities ever.
Peyton, we’ll miss you, but wish you luck and hopefully we can see you win at least one more ring.
Colts, we hope that Luck will bring the city another ring at some point. 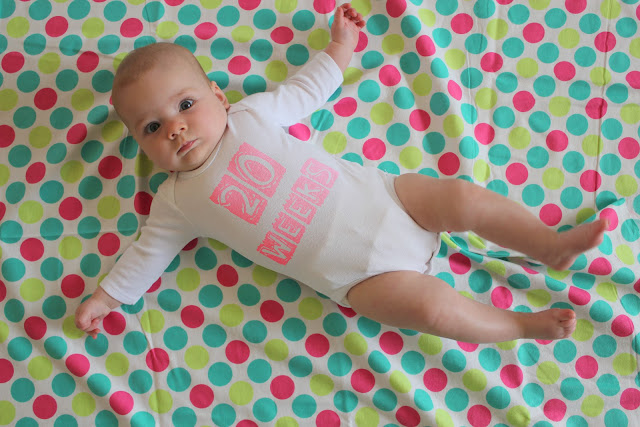 In other news, Kenley is changing every day.
I know I say that every week and I’m sure I’ll continue saying it,
but she is very alert, looks around all the time, and seems like she knows what is going on.

She reaches and grabs for everything, often with her mouth already open, knowing that’s right where it’s going.
For example, I was carrying her facing outward walking around the kitchen on Saturday
while Greg was making waffles and the syrup was sitting on the breakfast bar right at her level.
As I walked by, she reached out for it. I, of course, thought it was cute, and walked by it again so Greg could see.
Yep, you guessed it, the second time, she just hit it and the full bottle fell to the floor,
cracking the cap and shooting gooey, sticky syrup everywhere.
Awesome.

She has found her feet and is starting to realize she can put those, too, in her mouth.
I’m sure there will be pictures coming soon.

Last Friday night we got an email from one of Greg’s colleagues
asking if we wanted to go to the Colts/Bucs game in Tampa,
which happened to be the Monday Night Football game this week.

At this point on Friday night, I wasn’t feeling well at all,
we had just seen Contagion (good movie by the way), so I had been sitting for a while,
and was having some severe sciatic nerve pain, so I was a little skeptical.

But, it was the Colts. and MNF.
and something that we may not be able to just go and do very soon.

So, we decided to go, which I’m SO glad that we did!

It started off a little parking pass, that turned out to be so helpful!
We found a spot with our name on it.

Our seats were in a suite, which was so nice and comfy!

There were members of Zeta Tau Alpha at the game
passing out pink ribbons for Breast Cancer Awareness
and the NFL/ZTA campaign “A Crucial Catch”.

This made me so happy and so proud to be a Zeta.
I love watching the NFL in October and seeing all the pink.

Of course, we wish the Colts could have pulled out the win,
but it was actually nice to see Curtis Painter make two great plays for TDs,
something we haven’t seen much of all year!

It was a late night, but so much fun!!