A few weekends ago, I ran my first Run Disney race, the Star Wars Dark Side half marathon! The entire weekend was quite an experience and unlike any other race I’ve done, so I’m going to try to hit on all of the different aspects.

You pay to play.

I’ll get the only con out of the way. Running is an expensive sport and this race is no exception. The Run Disney race fee was the most I’ve ever paid for a race. I also chose to stay on property the night before the race which was an added cost. All in all, it’s a commitment.

The race expo was at the ESPN Wide World of Sports. It started on Thursday since the 5k and 10k races were on Friday and Saturday. I originally wanted to go out to the expo on Thursday, but Kenley ended up having a soccer game. Based on what I have heard, I was anticipating long lines to pick up all of the pre-race goodies. We arrived at the expo a little later than I wanted around 2pm on Saturday. The expo ended at 4pm and I was surprised to find no lines at all! Kenley and I left the boys in the car and walked (and walked) up to get my stuff. The bib pick up station was located in the HP Field House, then we headed over to the Jostens Center. Since there were no crowds, Kenley got her picture with a Storm Trooper before heading in. The t-shirt pick up was at the very back of the expo. There were so many vendors selling so many great things. I wanted to buy ALL the Run Disney gear, but left without anything. Overall, the expo was great and the pick up process was quick and easy, aside from a lot of walking. 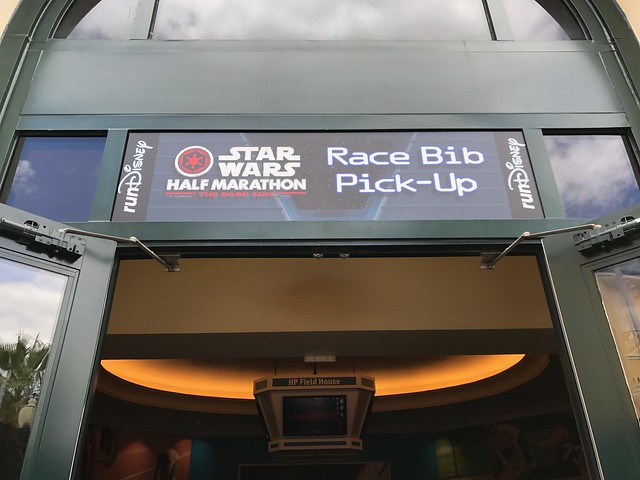 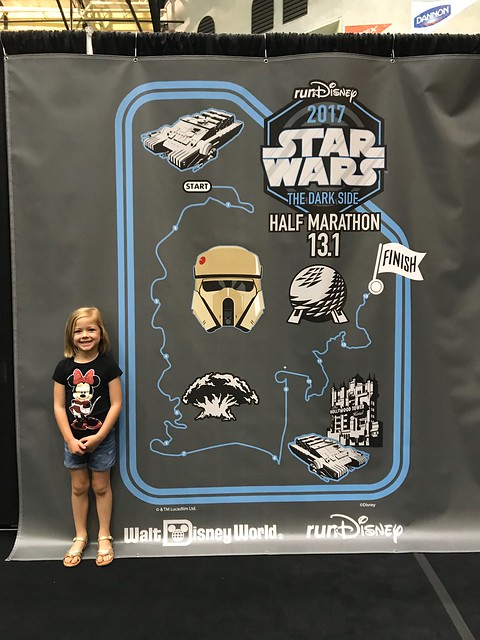 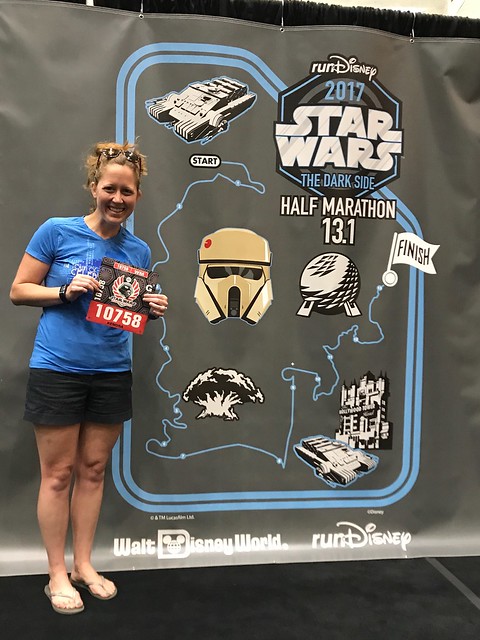 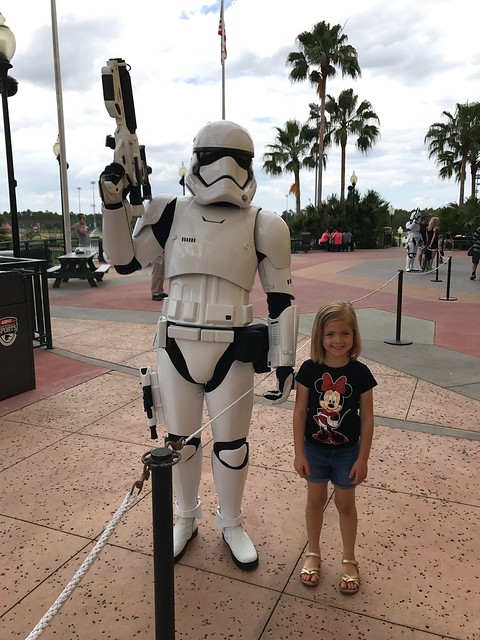 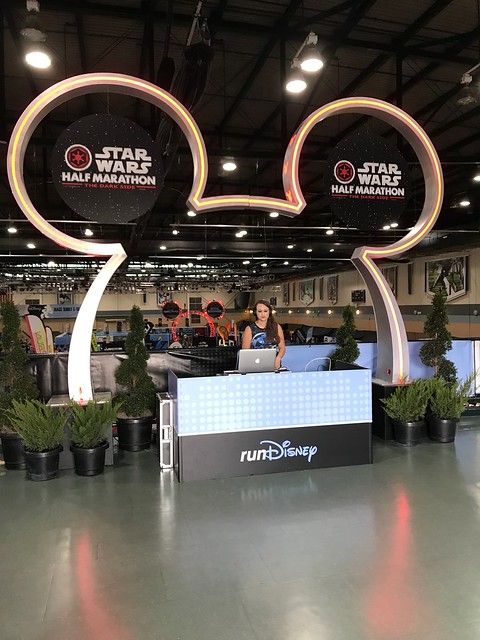 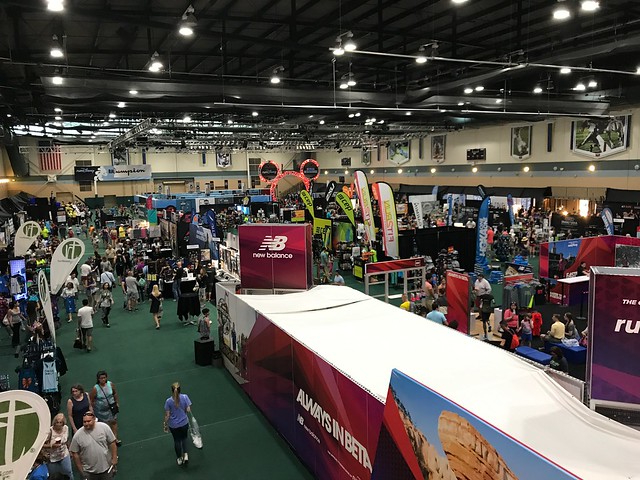 Setting my alarm for the middle of the night.

The race started at 5:30am in the Magic Kingdom parking lot. The start time wasn’t that early considering I’ve ran races that started at 6am. However, we were taking advantage of the Disney buses since we were staying on property and we had to be ON the bus by 4am to ensure we were at the start line in time. Therefore, I set my alarm for 3:00am which was a first for me! We walked down to the bus stop and got right on the bus putting us at the start line around 4am. Transportation was a breeze. There were buses full of people pulling in, one after the other. We joked that if there was ever a zombie apocalypse, Disney should be in charge of the evacuation plan. It was like we were all zombies at that time too, considering it was the middle of the night.

We had more than enough time at the start line before the race started. One thing that surprised me the most were all of the the lines for the characters. There were probably 8-10 characters there for photo opportunities and each character had a publicized wait time. The wait time for Darth Vader at 4am was 70 MINUTES!

We had some breakfast, stretched, went potty, then headed into our corral. We were in corral G based on when we signed up for the race (late!) and corral G was the very last corral. While we waited, they played Star Wars movie clips and did trivia with the participants. The race finally started at 5:30am with fireworks! Each corral that was released got their own fireworks show. The start of the race was a big deal! Unfortunately, we saw a LOT of fireworks. We finally started the race at 6:20am, 50 minutes after the first corral started. 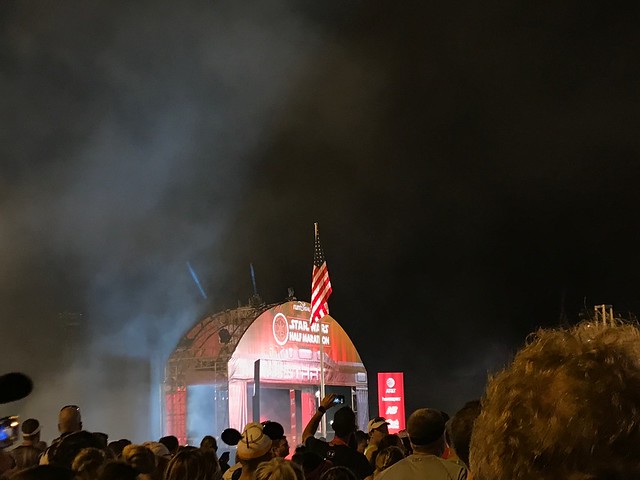 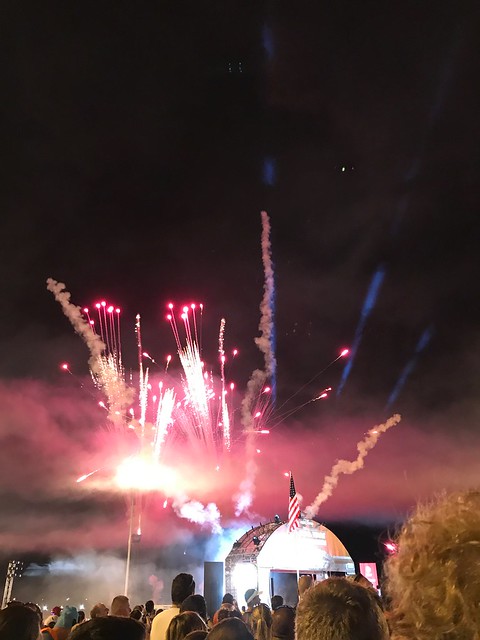 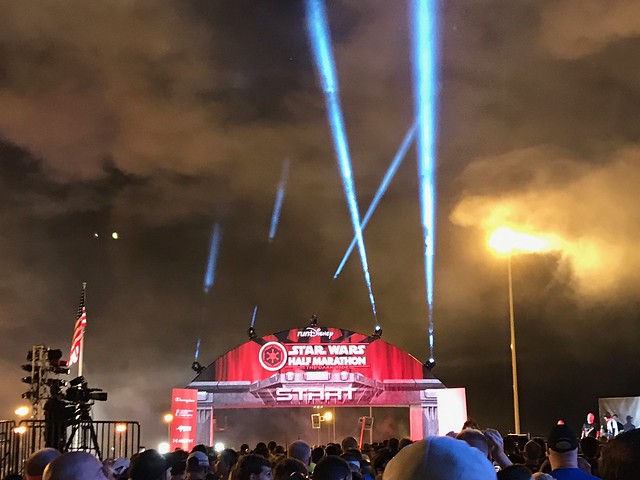 The race course map was released a couple weeks before the race which I studied intently. I don’t normally look at the course map before a race, but I was really excited about this one. I knew the first few miles would be pretty boring since the course took us from the Magic Kingdom parking lot along the back roads into Animal Kingdom.

Around mile 4, we entered Animal Kingdom as the sun was starting to come up. We stopped for the potty by the safari ride when we got into the park then ran around the entire park and out the entrance. 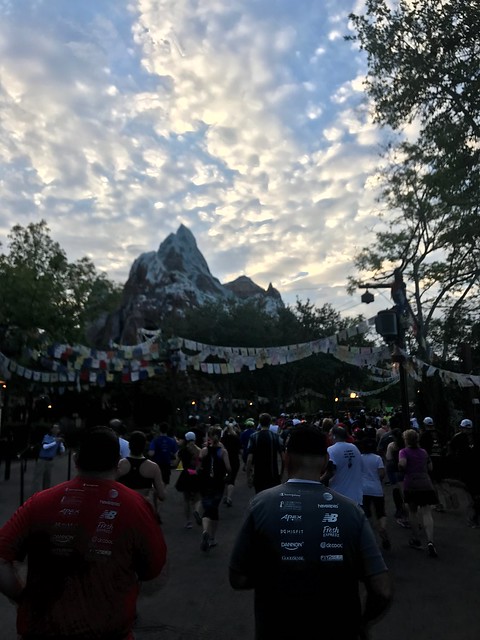 The course then took us through the Animal Kingdom parking lot and up the main roads for the next couple of miles. After one large on-ramp just after mile 9, we entered the back side of Hollywood Studios and ran through the park. 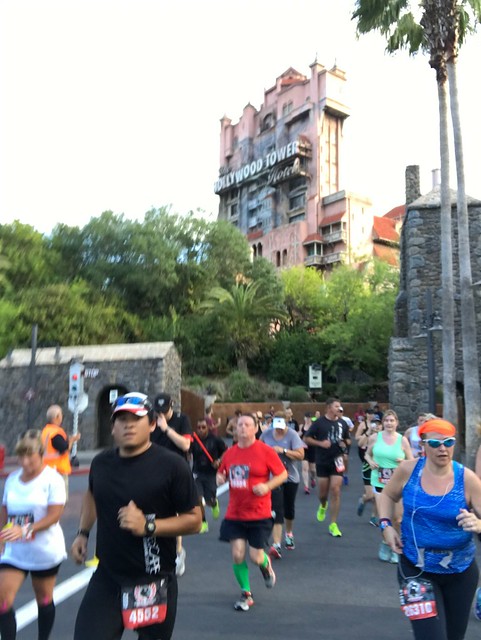 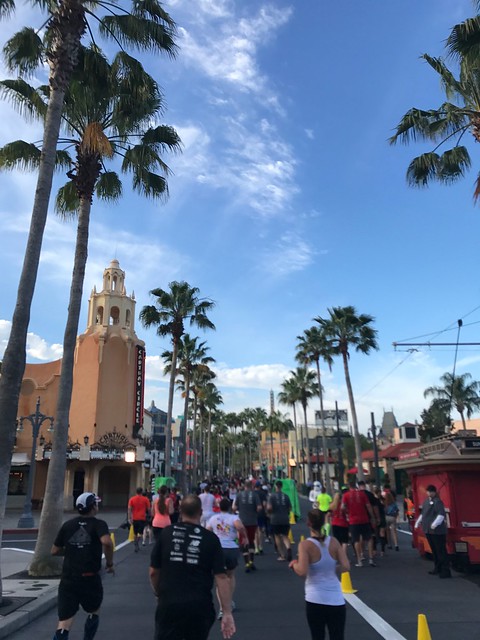 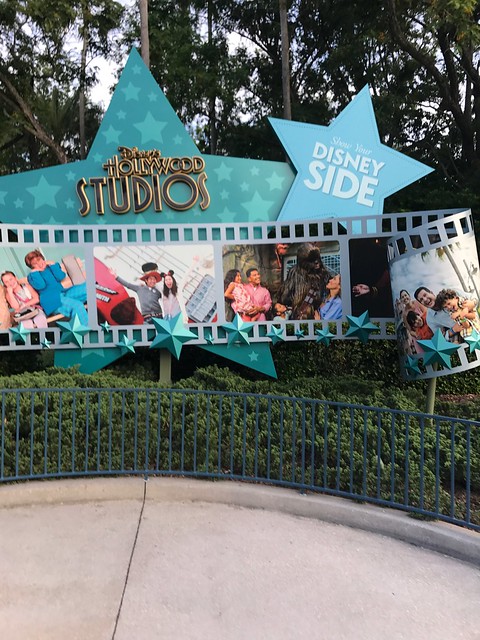 We passed mile 10 while in Hollywood Studios are were only another 5k away from the finish. At this time, the sun was up and blazing. It was hot! We headed out of Hollywood Studios and made our way towards Epcot and the finish line. Along the way, we ran pass the Swan and Dolphin Hotel and along the Boardwalk. 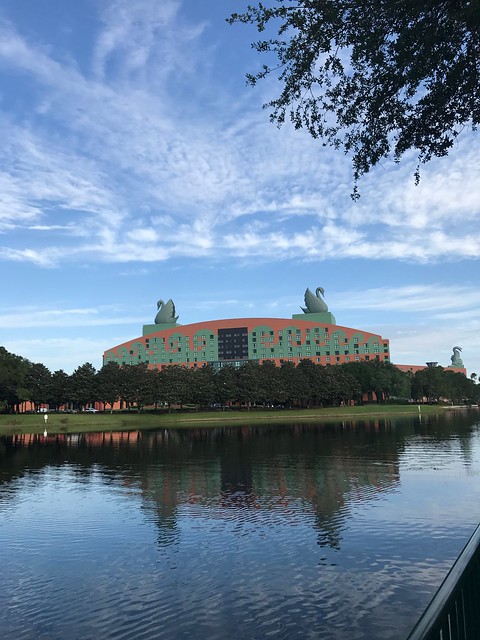 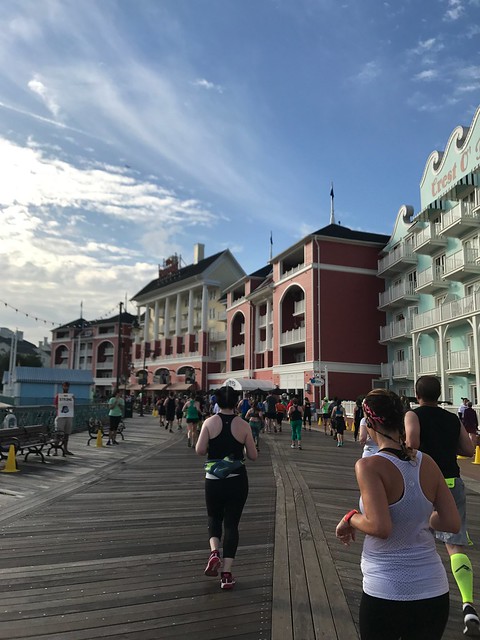 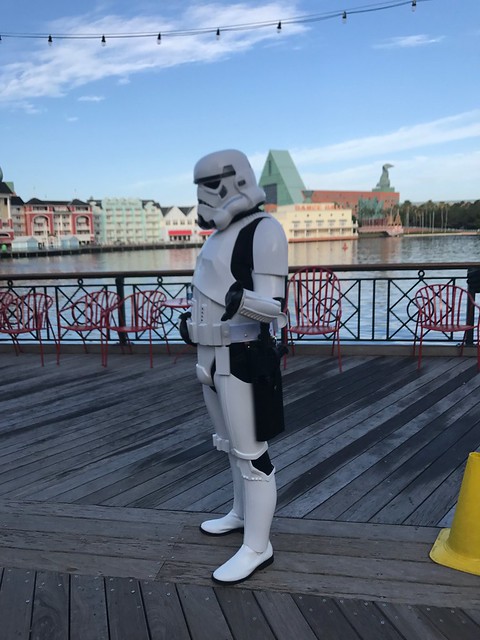 We finally entered Epcot in England just before the mile 12 marker. The International Flower and Garden Festival was happening so it was great to see all of the fun foliage! We ran through all of the countries and out the entrance of Epcot. The finish line was in the Epcot parking lot which was lined with spectators and fans as we ran out of the park. 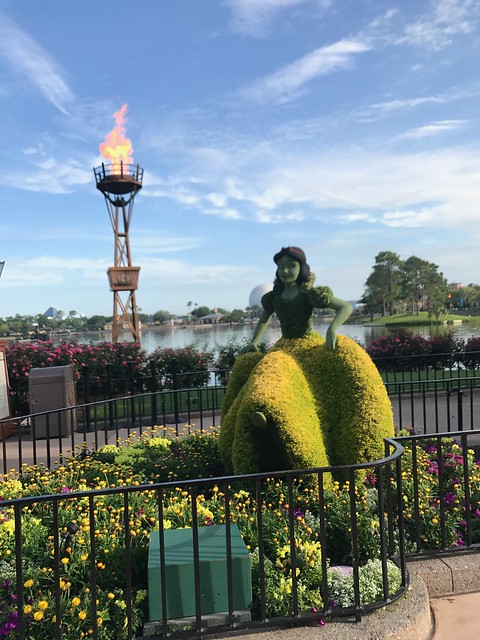 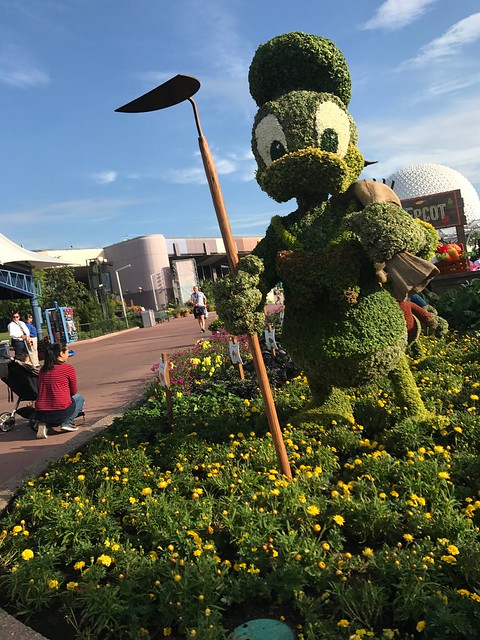 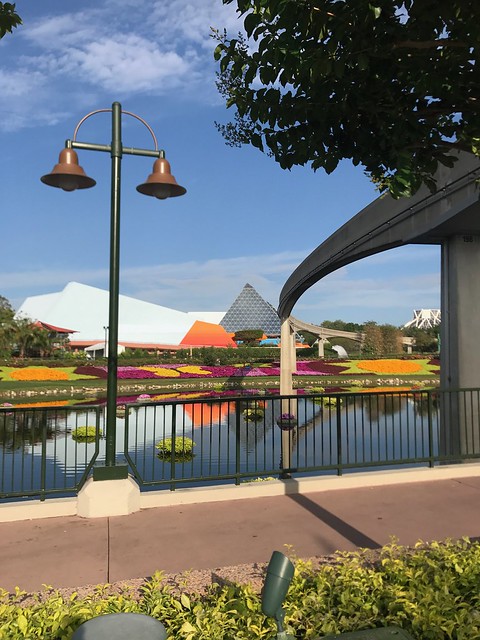 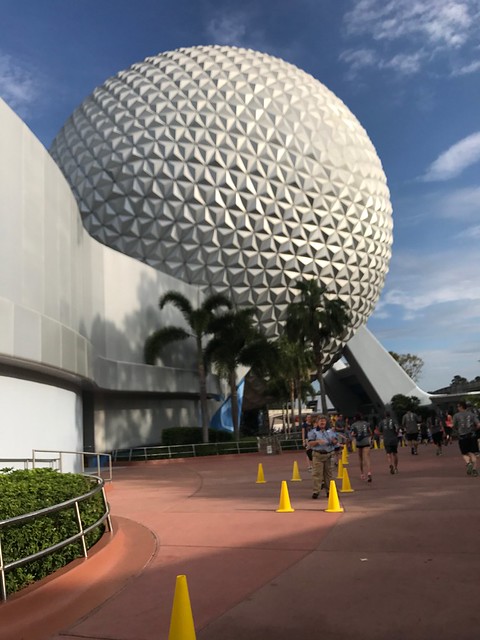 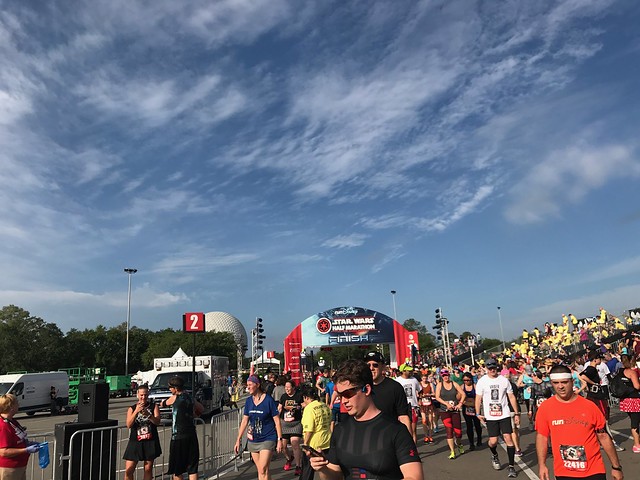 During the race, the course was insanely packed. I was bummed that we had to start in corral G because we were bobbing and weaving through people the entire race. We started behind the 3 hour and 30 minute pace group while our goal time was around 2 hours and 15 minutes. I now know the importance of submitting a time during the registration process for Disney races. I know the experience on the course would have been completely different if we were running with others who were our same pace.

Overall, the race was amazing! I was shocked by all of the entertainment along the way. I knew there would be characters to meet and greet, but I was surprised to see all sorts of other entertainment, such as sound effects, light shows, music, and movie clips along the way. What I thought would be the boring part of the course was actually just as fun as the rest of the course. We didn’t stop to meet any characters since there were lines at each stop. I also am too competitive with myself to think about stopping during a race. This was by far the most fun race I have ever done. We finished in 2:31.44 which I am considering a great time for a Disney race. It may not be anytime soon, but I will definitely be doing another Disney race in the future. 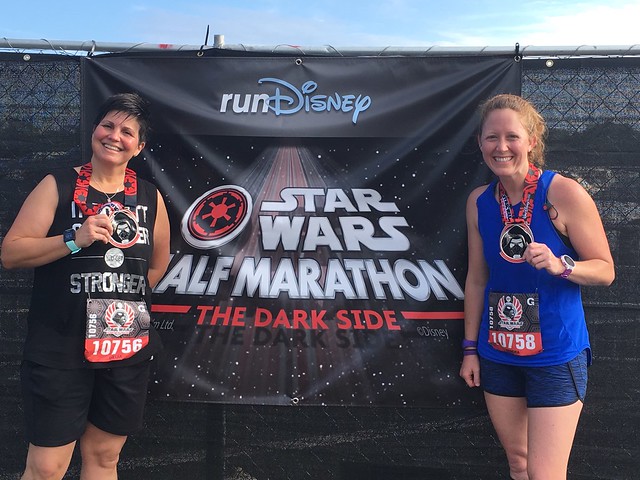