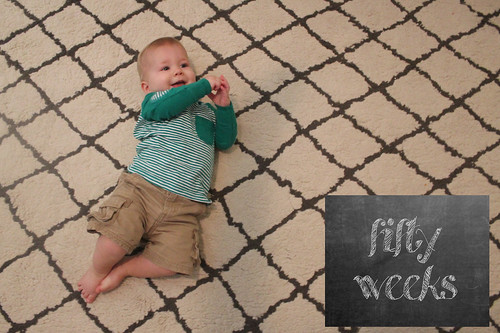 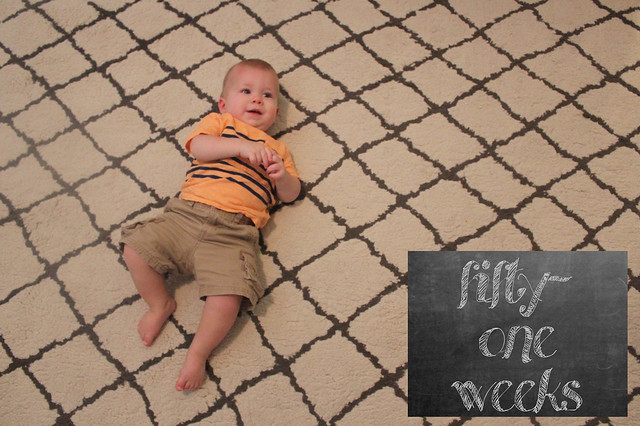 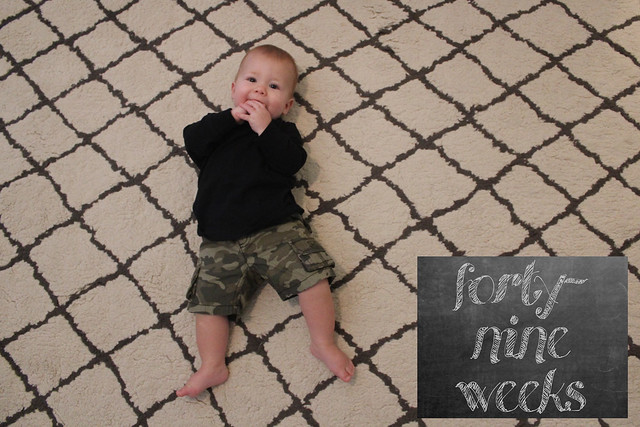 Crosby had a big week this week! He is officially walking!
He took 3-5 steps a couple times on Monday while he was at school and has gotten better and better as the week has gone on. He’s not fully walking yet, but it’s a good mix of walking and crawling. It’s going to start getting more fun around here!

His other new trick is going up and down on the anywhere chair. He will do it over and over again; along with standing on it and diving over the arms of the chair. He’s done a couple of somersaults off the side too and it doesn’t phase him in the least… he’s all boy, that’s for sure.

We’re creeping closer and closer to the end of our weekly photo project.
I’m not quite sure how that is possible? 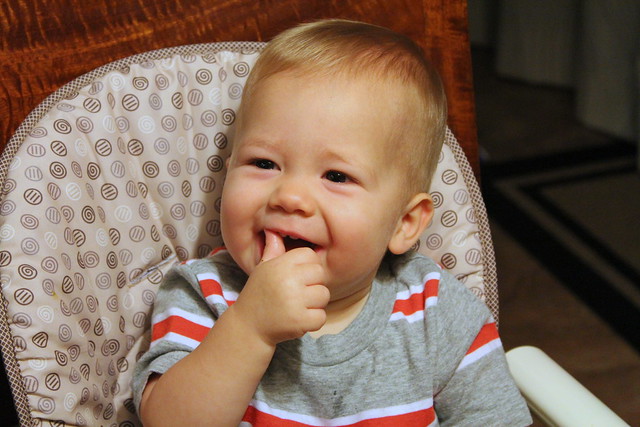 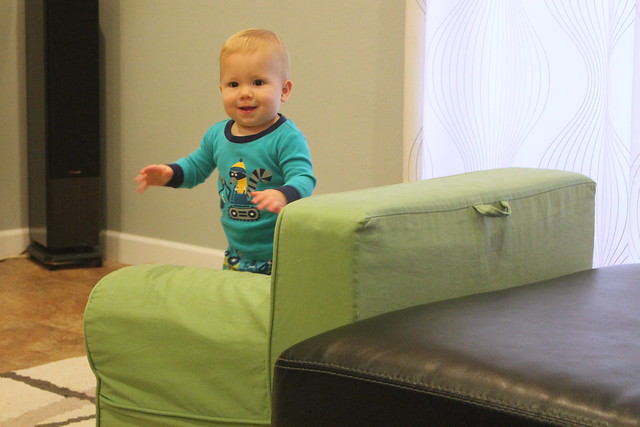 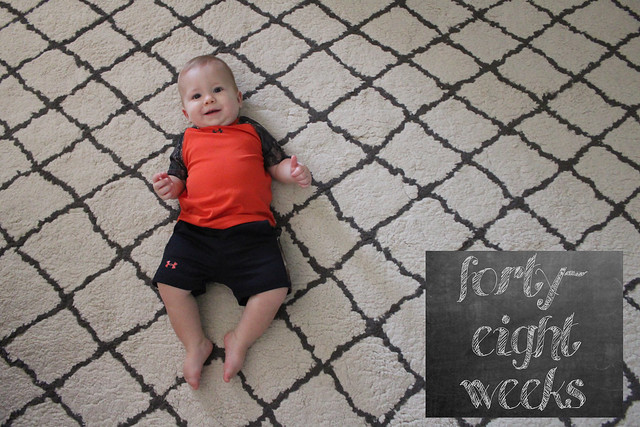 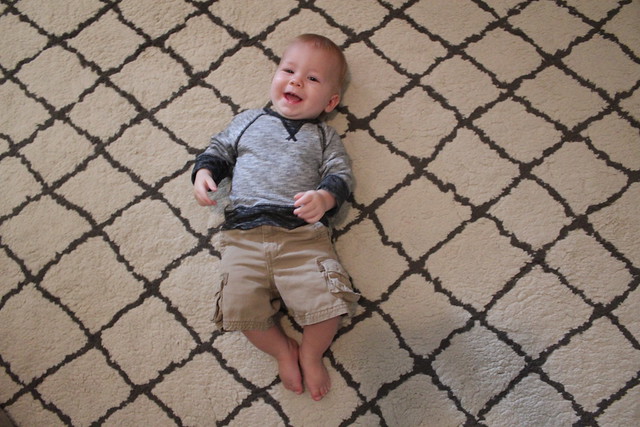 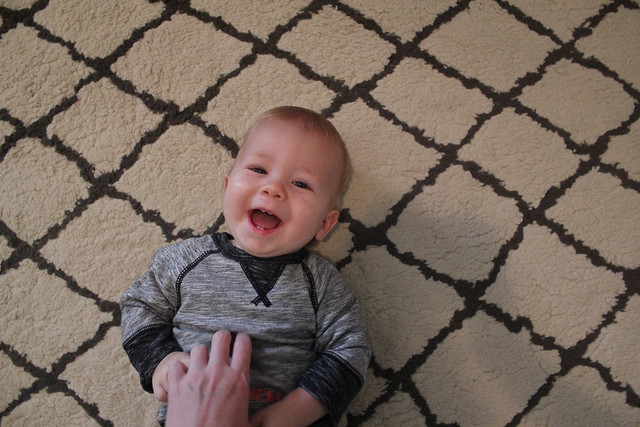 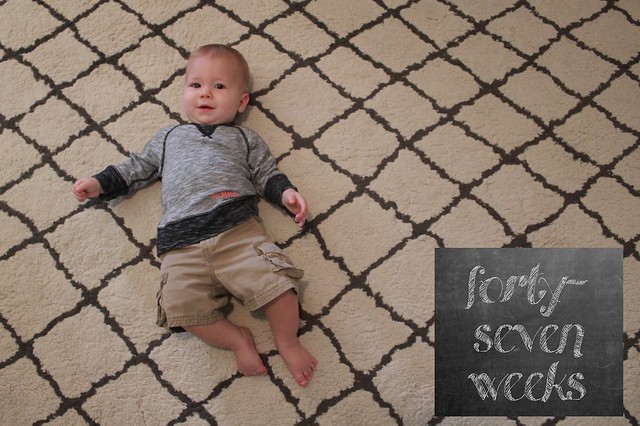 Stay tuned for a big update coming this weekend. 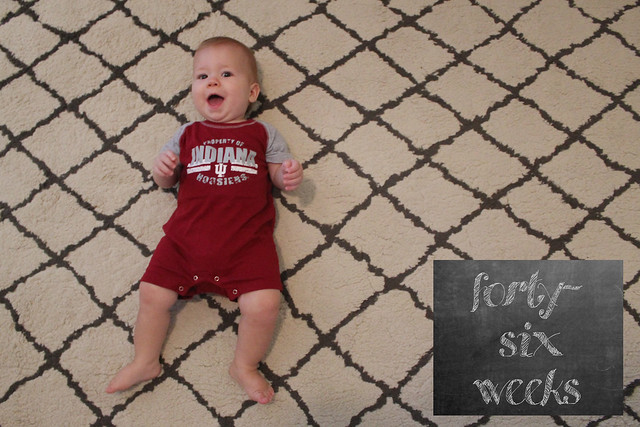 We made our first trip to urgent care this week. Crosby was under the weather on Monday night with high fever. It turns out it was just a virus. He got better as the week went on, but you could tell he was fighting something off. Not to mention another tooth broke through over the weekend (his 5th!), so that just added fuel to the fire. The poor guy had drool and snot running down his face all weekend. Aside from feeling yucky, he’s doing very well. He took two baby steps on Friday morning, which we are for sure counting as his first steps, but he hasn’t decided to take any more. In time!

I skipped last week so I’m doubling up this week. Can you tell we are excited football is back?! 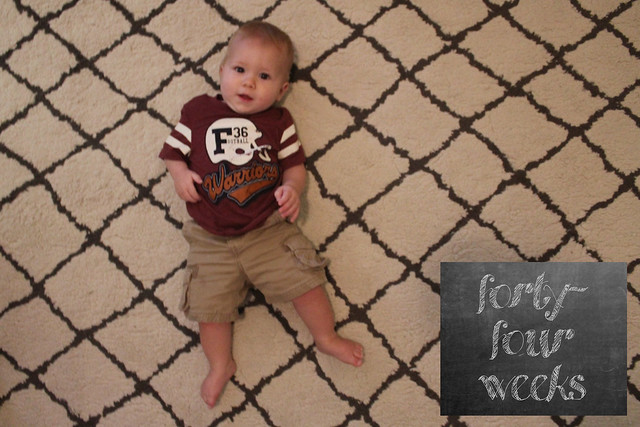 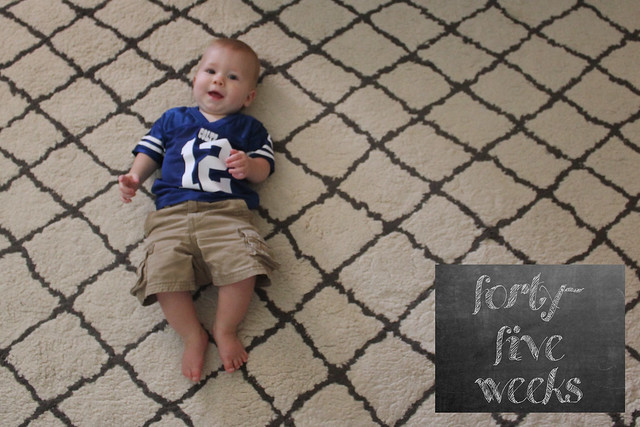 Those teeth have been giving him a hard time lately. But, they sure are cute. 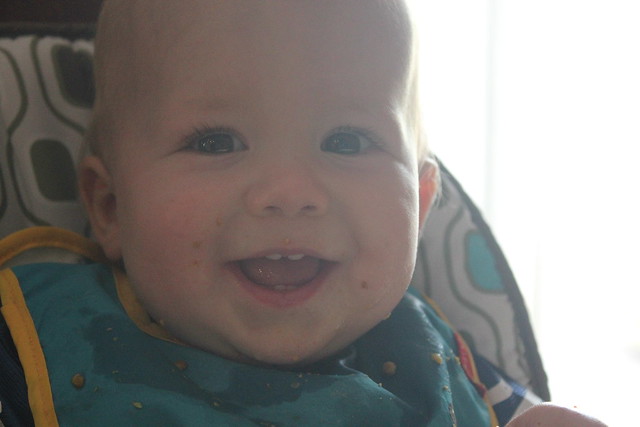 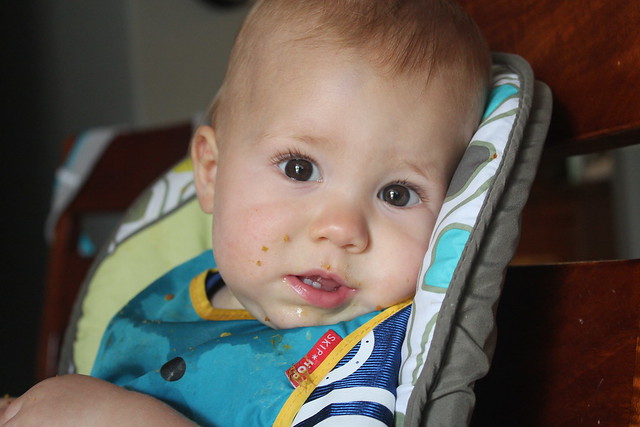 Little man is 43 weeks! Stay tuned for a longer update on Wednesday. 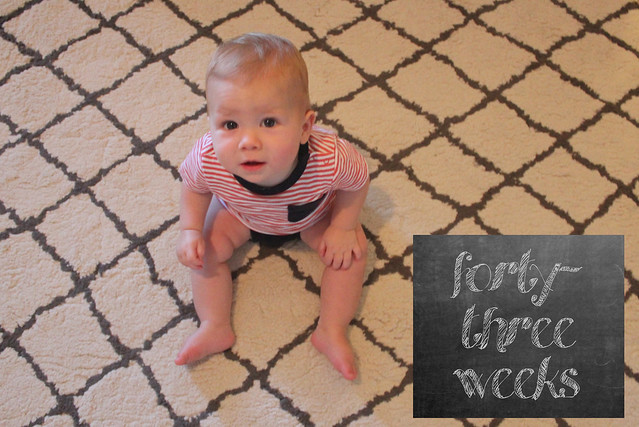 Little man had his first day of school today in the older infant room.
We are so excited for his new class! 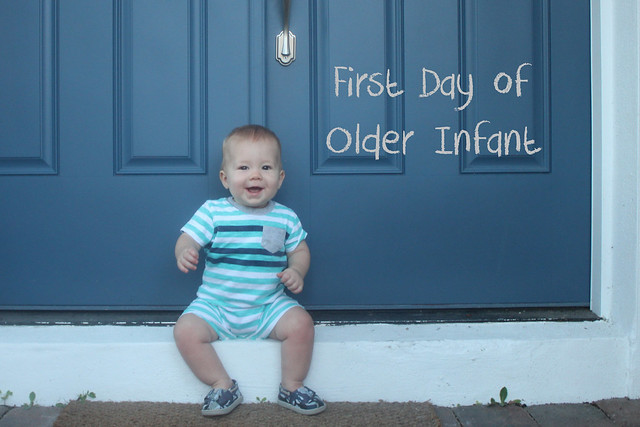 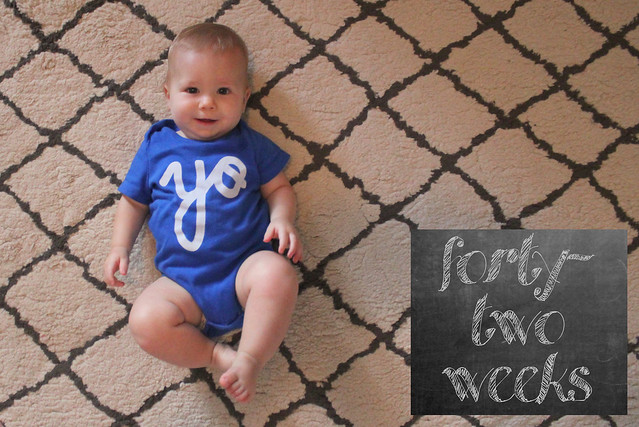 Such a big boy! 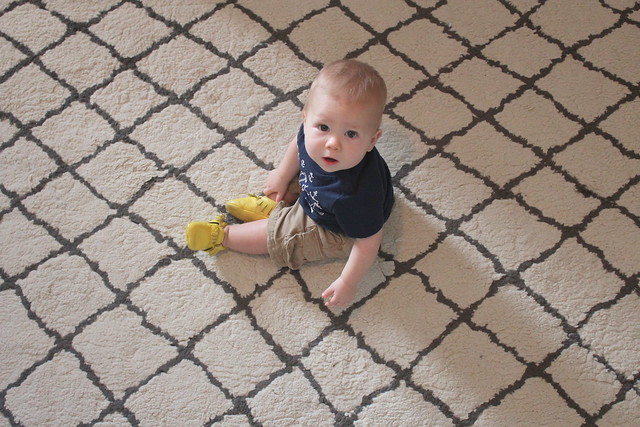 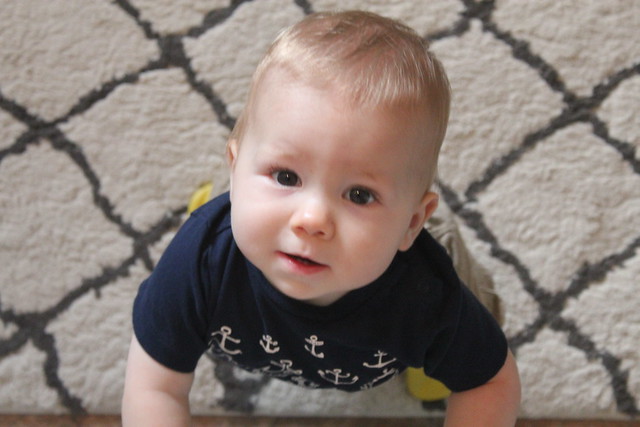 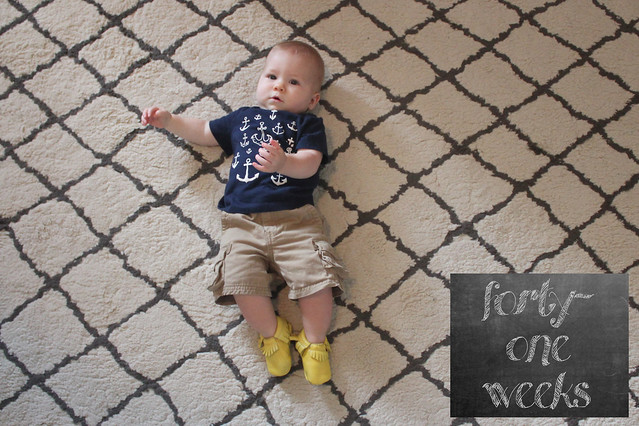 Forty weeks means that little man has been on the outside longer than he was on the inside.
So crazy!

He is doing very well and is constantly on the move.
This weekend he climbed up four stairs and we immediately put the baby gate up.
I also broke out the pack & play so he was contained long enough for me to take a shower.
He was not a fan, but at least I was clean. 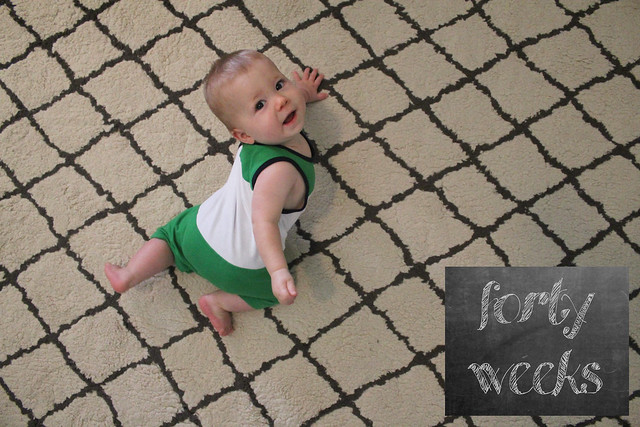 The weeks keep flying by!

My Tweets
The Gilbertson Family
Blog at WordPress.com.